"You can't be a rational person six days of the week and put on a suit and make rational decisions and go to work and, on one day of the week, go to a building and think you're drinking the blood of a 2,000-year-old space god," comedian and atheist Bill Maher said earlier this year on "Late Night With Conan O'Brien."

On the "Saturday Night Live" season debut last week, homeschooling families were portrayed as fundamentalists with bad haircuts who fear biology. Actor Matt Damon recently disparaged Sarah Palin by referring to a transparently fake email that claimed she believed that dinosaurs were Satan's lizards. And according to prominent atheists like Richard Dawkins, traditional religious belief is "dangerously irrational." From Hollywood to the academy, nonbelievers are convinced that a decline in traditional religious belief would lead to a smarter, more scientifically literate and even more civilized populace.

The reality is that the New Atheist campaign, by discouraging religion, won't create a new group of intelligent, skeptical, enlightened beings. Far from it: It might actually encourage new levels of mass superstition. And that's not a conclusion to take on faith -- it's what the empirical data tell us.

"What Americans Really Believe," a comprehensive new study released by Baylor University yesterday, shows that traditional Christian religion greatly decreases belief in everything from the efficacy of palm readers to the usefulness of astrology. It also shows that the irreligious and the members of more liberal Protestant denominations, far from being resistant to superstition, tend to be much more likely to believe in the paranormal and in pseudoscience than evangelical Christians. 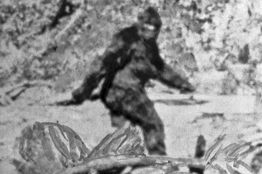 The Gallup Organization, under contract to Baylor's Institute for Studies of Religion, asked American adults a series of questions to gauge credulity. Do dreams foretell the future? Did ancient advanced civilizations such as Atlantis exist? Can places be haunted? Is it possible to communicate with the dead? Will creatures like Bigfoot and the Loch Ness Monster someday be discovered by science?

The answers were added up to create an index of belief in occult and the paranormal. While 31% of people who never worship expressed strong belief in these things, only 8% of people who attend a house of worship more than once a week did.

Even among Christians, there were disparities. While 36% of those belonging to the United Church of Christ, Sen. Barack Obama's former denomination, expressed strong beliefs in the paranormal, only 14% of those belonging to the Assemblies of God, Sarah Palin's former denomination, did. In fact, the more traditional and evangelical the respondent, the less likely he was to believe in, for instance, the possibility of communicating with people who are dead.

This is not a new finding. In his 1983 book "The Whys of a Philosophical Scrivener," skeptic and science writer Martin Gardner cited the decline of traditional religious belief among the better educated as one of the causes for an increase in pseudoscience, cults and superstition. He referenced a 1980 study published in the magazine Skeptical Inquirer that showed irreligious college students to be by far the most likely to embrace paranormal beliefs, while born-again Christian college students were the least likely.

Surprisingly, while increased church attendance and membership in a conservative denomination has a powerful negative effect on paranormal beliefs, higher education doesn't. Two years ago two professors published another study in Skeptical Inquirer showing that, while less than one-quarter of college freshmen surveyed expressed a general belief in such superstitions as ghosts, psychic healing, haunted houses, demonic possession, clairvoyance and witches, the figure jumped to 31% of college seniors and 34% of graduate students.

We can't even count on self-described atheists to be strict rationalists. According to the Pew Forum on Religion & Public Life's monumental "U.S. Religious Landscape Survey" that was issued in June, 21% of self-proclaimed atheists believe in either a personal God or an impersonal force. Ten percent of atheists pray at least weekly and 12% believe in heaven.

On Oct. 3, Mr. Maher debuts "Religulous," his documentary that attacks religious belief. He talks to Hasidic scholars, Jews for Jesus, Muslims, polygamists, Satanists, creationists, and even Rael -- prophet of the Raelians -- before telling viewers: "The plain fact is religion must die for man to live."

But it turns out that the late-night comic is no icon of rationality himself. In fact, he is a fervent advocate of pseudoscience. The night before his performance on Conan O'Brien, Mr. Maher told David Letterman -- a quintuple bypass survivor -- to stop taking the pills that his doctor had prescribed for him. He proudly stated that he didn't accept Western medicine. On his HBO show in 2005, Mr. Maher said: "I don't believe in vaccination. . . . Another theory that I think is flawed, that we go by the Louis Pasteur [germ] theory." He has told CNN's Larry King that he won't take aspirin because he believes it is lethal and that he doesn't even believe the Salk vaccine eradicated polio.

Anti-religionists such as Mr. Maher bring to mind the assertion of G.K. Chesterton's Father Brown character that all atheists, secularists, humanists and rationalists are susceptible to superstition: "It's the first effect of not believing in God that you lose your common sense, and can't see things as they are."

Ms. Hemingway is a writer in Washington.