3000 PEOPLE TRAVELED FROM AS FAR AWAY AS MEXICO, NEW YORK, CALIFORNIA AND FLORIDA TO SUPPORT THE CATHOLIC IDENTITY OF NOTRE DAME Bishop John D'Arcy intended to stay away from Notre Dame
last Sunday,
but he says he belonged on campus
to accompany a group of Notre Dame students in prayerful protest.

The bishop of the Fort Wayne-South Bend Diocese informed Notre Dame in March that he wouldn't attend this year's commencement ceremony after the university announced its decision to invite President Barack Obama as the speaker and bestow on him an honorary law degree.

Eighty-two other prelates soon joined Bishop D'Arcy in voicing disagreement with the university's gesture toward Obama, saying it went against the guidelines set by the U.S. bishops' conference for Catholic institutions of higher education.

The 2004 statement says schools should not bestow honors on individuals who "act in defiance" of the Church's fundamental teachings.

But the activity of a coalition of 12 Notre Dame student groups, formed to protest the administration's plans for graduation day, and to organize a parallel event in support of life and Catholic values, caught Bishop D'Arcy's eye.

The coalition, called ND Response, organized a prayer vigil the night before the commencement ceremony, including a directed meditation by Father John Corapi of the Society of Our Lady of the Most Holy Trinity.

The vigil launched an all-night Eucharistic adoration, which concluded on Sunday -- graduation day.

Sunday Mass was held outside on one of the campus quads to accommodate the 3,000 people who had traveled from as far away as Mexico, New York, California and Florida to support the Catholic identity of the university and its pro-life mission.

The outdoor Mass, concelebrated by eight priests and presided over by Holy Cross Father Kevin Russeau, was followed by a rally featuring speakers with ties to Notre Dame.

Bishop D'Arcy made a surprise appearance, and after being invited to take the podium, he admitted, "It was not my intention to come today."

He explained, however, that he had visited the Marian grotto on campus and had observed students praying, and later visited the chapel where Eucharistic adoration was being held.

These moments of prayer, he said, "showed me the place for the bishop to be is here."

"The office of bishop is very important," the prelate added. He echoed the words of Pope John Paul II, and affirmed the importance of standing up "for life, all the time, everywhere, without exception."

Bishop D'Arcy told the crowd: "I found myself saying in recent weeks that this is a sad time, that there are no winners. But I was wrong."

He affirmed that the "heroes" are "the young people on campus, the students" who followed in "the great tradition of Pope John Paul and Pope Benedict."

The bishop continued: "Their protest was carried out with love, and with prayer, and with dignity and with respect. But with a firmness, also, as to what is right."


Bishop D'Arcy concluded, "So there are heroes; all of you here today are heroes, and I'm proud to stand with you."


After the rally, Father Frank Pavone, national director of Priests for Life, led a rosary at the grotto of Our Lady of Lourdes, in a prayer vigil dedicated to the 40 graduates present there as a boycott to the official commencement ceremony.

Father Russeau gave tribute to these students in his homily, stating that despite all the media's coverage of the controversy, "one story that I don't hear enough about […] is the response of the student body."

He continued: "In the face of this controversy, I have witnessed countless students who have given me inspiration.

"Students who instinctively know to approach God in prayer about their trials, students who reach out to others in attempts to offer care, students who have demonstrated to me an ability to listen and obey the scripture we proclaim this day."

In these past months, the priest said, it has been inspiring to see the student body's "instinct to come to the altar of the Lord to ask for guidance and strength."

He added: "I can't tell you the number of rosaries and Masses and prayer meetings that have been intentional responses to what many feel is a concession to the culture of death.

"Students, family, friends, alumni, and many of you, have spent hours in adoration looking for the proper response.

"The students that I have come to know here on campus have reminded me that in all things we must respond with love. And to respond with love in hard times, we must ask our Lord for grace. We are here today to bear witness and to love." 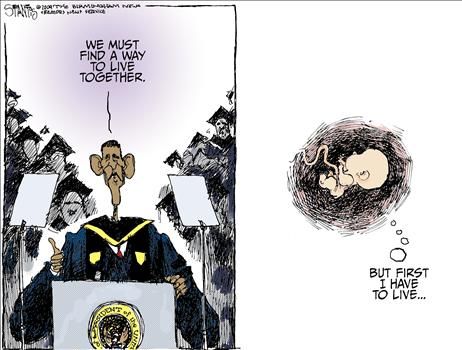 A press statement from ND Response affirmed, "Sunday's events not only provided powerful witness to the sanctity of human life but also expressed constructive disappointment at the University of Notre Dame's decision to honor President Barack Obama, who has publicly supported abortion and embryo-destructive stem cell research during his tenure in office."