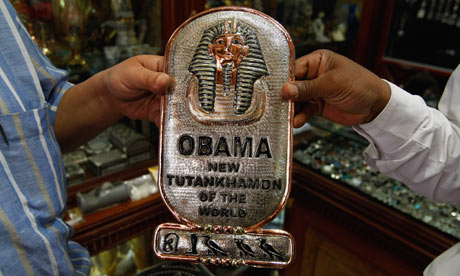 Now it's on to Normandy,
to apologize to the Germans.
It's the least an American president can do
after the way the Allied armies left so much of Europe in rubble.
There's a lot of groveling to do
for what America accomplished in the Pacific, too.

This prospect should appeal to Barack Obama,
who relishes the role of Apologizer-in-Chief.
Apologizing for manifold sins against civilization is not always easy,
but it's simple enough:
"Blame America First."
You just open a vein and let it flow.
In Cairo, Mr. Obama opened an artery.

America, unlike the president, is guilty of hubris, arrogance and cant. All that must change. "Change" is what the smooth-talking Chicago messiah says he is all about. "Given our interdependence, any world order that elevates one nation or group of people over another will inevitably fail," he told the Muslim elites Thursday at Cairo U. "So whatever we think of the past, we must not be prisoners of it." It's not "a world order" that elevates America, but events. No other country is as generous, as forgiving, as willing to sacrifice blood and bone when the world calls for help. If not America, who? Hasn't the president heard?

Big talkers don't know when to stop when they're on a rhetorical roll because they can't remember which facts are actually facts and which "facts" they're making up. Mr. Obama even attributed the Golden Rule, from the teachings of Christ, to "every religion." In an interview before the Cairo speech, he called the United States one of "the largest Muslim countries," based on its Muslim population, and he later put the number of Muslims in America at 7 million, more than even most Islamic advocacy groups claim. The most reliable estimate, by the nonpartisan Pew research organization, is 1.8 million. That would make the United States the 48th "largest" Muslim nation, just behind Montenegro. Mr. Obama often has trouble with numbers, big and small; he once boasted of having campaigned in 57 states.

Mr. Obama described himself as "a Christian, but," and offered a hymn to the Muslim roots he insisted during the late presidential campaign he didn't have. He invoked his middle name, "Hussein," as evidence that he was one of "them." The Obama campaign insisted last year that anyone who uses the middle name was playing with racism.

He told the Cairo audience that "to move forward we must say openly the things we hold in our hearts," but he wasted the opportunity to forcefully instruct Muslims that respect and appreciation must be mutual. While conceding the mote in American eyes, he said almost nothing about the beam that blinds Muslim eyes. He enumerated the "sources of tension" between Islamic countries and the West and never mentioned terrorism. He chided the West for its harsh view of Islamic treatment of women - "I reject the view of some in the West that a woman who chooses to cover her hair is somehow less equal" - and suggested that denying education to women is the gravest Muslim sin against women. He could have denounced "honor killings," forced marriages and how women in Muslim countries are flogged on the pretext of minuscule violations of eighth-century Sharia law.

But it was more fun to fish for applause by berating America and throwing rocks at Israel. "Let there be no doubt: The situation for the Palestinian people is intolerable. America will not turn our backs on the legitimate Palestinian aspiration for dignity, opportunity and a state of their own." Israel, he said, must "live up to its obligations," but he had hardly a word of rebuke for the long record of broken Palestinian promises. It was a remarkable insult to an absent ally, delivered to the applause of Israel's sworn enemies.

Mr. Obama's revelation of his "inner Muslim" in Cairo reveals much about who he is. He is our first president without an instinctive appreciation of the culture, history, tradition, common law and literature whence America sprang. The genetic imprint writ large in his 43 predecessors is missing from the Obama DNA. He no doubt meant no offense in returning that bust of Churchill ("Who he?") or imagining that a DVD of American movies was appropriate in an exchange of state gifts with Gordon Brown. Nor did he likely understand why it was an offense against history (and good manners) to agree to the exclusion of the Queen from Saturday's commemoration of the Anglo-American liberation of France. Kenya simply routed Kansas.

The great Cairo grovel accomplished nothing beyond the humiliation of the president and the embarrassment of his constituents, few of whom share his need to put America on its knees before its enemies. No president before him has ever shamed us so. We must never forget it.
---
“INNER MUSLIM” AT WORK IN CAIRO
by Wesley Pruden
THE WASHINGTON POST
Friday
05 June 09
Wesley Pruden is editor emeritus of The Washington Times.

WASHINGTON D.C., April 1, 2009: In a move certain to fuel the debate over Obama's qualifications for the presidency, the group "Americans for Freedom of Information" has released copies of President Obama's college transcripts from Occidental College. Released today, the transcript indicates that Obama, under the name Barry Soetoro, received financial aid as a foreign student from Indonesia as an undergraduate at the school. The transcript was released by Occidental College in compliance with a