What Wisconsin reveals about public workers and political power.

The raucous Wisconsin debate over collective bargaining may be ugly at times, but it has been worth it for the splendid public education. For the first time in decades, Americans have been asked to look under the government hood at the causes of runaway spending. What they are discovering is the monopoly power of government unions that have long been on a collision course with taxpayers. Though it arrived in Madison first, this crack-up was inevitable.

We first started running the nearby chart on the trends in public and private union membership many years ago. It documents the great transformation in the American labor movement over the latter decades of the 20th century. A movement once led by workers in private trades and manufacturing evolved into one dominated by public workers at all levels of government but especially in the states and cities.

The trend is even starker if you go back a decade earlier. In 1960, 31.9% of the private work force belonged to a union, compared to only 10.8% of government workers. By 2010, the numbers had more than reversed, with 36.2% of public workers in unions but only 6.9% in the private economy. 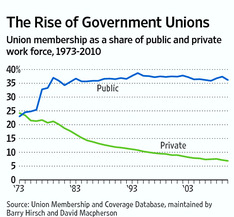 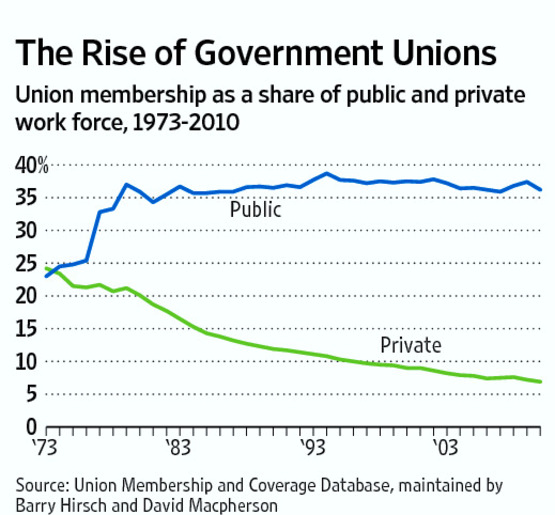 The sharp rise in public union membership in the 1960s and 1970s coincides with the movement to give public unions collective bargaining rights. Wisconsin was the first state to provide those rights in 1959, other states followed, and California became the biggest convert in 1978 under Jerry Brown in his first stint as Governor. President Kennedy let some federal workers organize (though not collectively bargain) for the first time in 1962, a gambit to win union support for his re-election after his cliffhanger victory in 1960.

It's important to understand how revolutionary this change was. For decades as the private union movement rose in power, even left-of-center politicians resisted collective bargaining for public unions. We've previously mentioned FDR and Fiorello La Guardia. But George Meany, the legendary AFL-CIO president during the Cold War, also opposed the right to bargain collectively with the government.

Why? Because unlike in the private economy, a public union has a natural monopoly over government services. An industrial union will fight for a greater share of corporate profits, but it also knows that a business must make profits or it will move or shut down. The union chief for teachers, transit workers or firemen knows that the city is not going to close the schools, buses or firehouses.

This monopoly power, in turn, gives public unions inordinate sway over elected officials. The money they collect from member dues helps to elect politicians who are then supposed to represent the taxpayers during the next round of collective bargaining. In effect union representatives sit on both sides of the bargaining table, with no one sitting in for taxpayers. In 2006 in New Jersey, this led to the preposterous episode in which Governor Jon Corzine addressed a Trenton rally of thousands of public workers and shouted, "We will fight for a fair contract." He was promising to fight himself.

Thus the collision course with taxpayers. Public unions depend entirely on tax revenues to fund their pay and benefits. They thus have every incentive to elect politicians who favor higher taxes and more government spending. The great expansion of state and local spending followed the rise of public unions.

Professors Fred Siegel and Dan DiSalvo point out that even during the Reagan years, growth in state and local government jobs was double the rate of population growth. The effect on the private economy is a second order problem for public unions, as we've seen from the recession's far more damaging impact on private than on public workers. 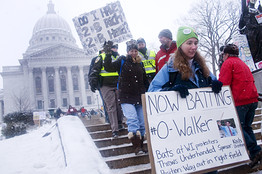 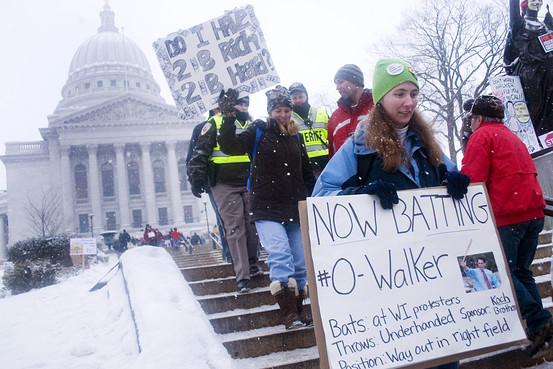 Current AFL-CIO chief Rich Trumka has tried to portray Wisconsin Governor Scott Walker's reforms as an attack on all unions, but they clearly are not. If anything, by reining in public union power, Mr. Walker is trying to protect private workers of all stripes from the tax increases that will eventually have to finance larger government. Regarding public finances, the interests of public union workers and those of private union taxpayers are in direct conflict. Mr. Walker is the better friend of the union manufacturing worker in Oshkosh than is Mr. Trumka.

Notice, too, how fiercely the public unions are willing to fight for collective bargaining power even if it means public job layoffs. Without Mr. Walker's budget reforms, Wisconsin will have to begin laying off thousands of workers as early as today. The unions would rather give up those jobs—typically for their younger members—than give up their political negotiating advantages. They know some future Governor or legislature will get those jobs back, as long as they retain their inordinate political clout.

This is the imbalance of political power that Mr. Walker is trying to break up, and he is right to do so. As important, the public in Wisconsin and around the U.S. seems to be listening and absorbing his message. The cause has been helped by the sit-ins and shouting of union members, the threats toward politicians who disagree with them, and by the flight of Democratic state senators to undisclosed locations in Illinois. It's hard to claim you're protecting democracy when you won't show up to vote. Taxpayers need to win the battle of Wisconsin for the sake of self-government.