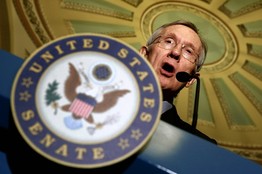 He hides divisions among Democrats by turning the Senate into the world's least deliberative body.


The simplest statements sometimes are the most insightful. For an example, consider this one on Wednesday from Oklahoma Sen. Tom Coburn, in reaction to President Obama's gun-control proposals: "I would welcome the opportunity to debate these issues on the floor of the Senate, and would encourage Majority Leader [Harry] Reid to schedule a full and open debate."


In these seemingly innocuous words are a key to GOP revival. What may be the most overlooked story of the past two years is how Harry Reid has subverted the democratic process, successfully allowing him to both protect his party and keep the focus on Republicans. If the GOP wants to start winning a few battles, this dynamic has to change.

The Founders created a legislative process that was deliberately different from the parliamentary systems of Europe. In the "regular order" of things, the House works its will. The Senate works its will. Those two bodies meet in conference. The president may then sign or veto the resulting legislation.

In Mr. Reid's Washington, the House works its will, the Senate does crossword puzzles. Its committees do not produce bills, its senators do not debate or amend, the body does not vote. The House, to accomplish anything, is forced to engage in backroom wrangling with the White House, the results of which are presented to the nation as a fait accompli. The Senate claims total deniability.
Mr. Reid's Senate has not produced a budget in three years. The majority leader rarely moves on a bill, and when he does, he uses tricks to block senators from amending legislation, or he shuts down debate in such a way as to kill legislation. Regular order and conference reports are nearly nonexistent.

Mr. Reid's primary motive is to shield his vulnerable members from tough votes and to hide the huge divisions in his party.
He does not want a debate on gun control, as it would force Democratic senators to choose between President Obama and their own pro-Second Amendment constituents. The majority leader would not offer a bill during the fiscal-cliff negotiations because many Democrats disagreed with their president's proposed tax hikes. He has not produced a budget because to do so would expose the party's real spending ambitions, which would create political problems back home for his members.

Mr. Reid knows there is a brilliant added bonus to making sure the Senate is inactive: It keeps all the attention on Republicans. The press is by now so used to Senate nothingness that reporters automatically turn every spotlight on the House. This allows the White House and Democrats to avoid ownership of problems that they have created by casting Republicans as the cause of every legislative crisis and as the barrier to solutions. It also keeps the focus on divisions within the GOP.

An example of how this works: Tax bills must originate in the House, so the GOP in August dutifully passed legislation to avert the fiscal cliff by extending rates for one year. With regular order, the Senate would have taken this up, amended it and gone to conference. No crisis.

But Mr. Reid didn't want his members to have to vote on a bill that either undercut the president or undercut their own re-election prospects—so he did nothing. As the clock ticked down to the expiration of the Bush tax rates, the White House (and the press) then claimed it was incumbent on the GOP to either cut a deal directly with the administration or be held responsible for tax hikes on everyone. Mr. Obama sat back to enjoy a public GOP brawl over its tax strategy, followed by his tax victory. Nowhere was it noted that the entire breakdown of the process—the entire reason for the crisis—rested on Mr. Reid's refusal to act.

Republicans are getting very wise to all this, as hinted by Mr. Coburn's polite request that the Senate debate gun control. In GOP circles, the talk is increasingly on ways to force Mr. Reid to re-engage with democracy. House Speaker John Boehner's recent declaration that any further debt deals will be done through "regular order" was in part an acknowledgment that dealing directly with Mr. Obama is folly. But it was just as much a declaration that Mr. Boehner intends to pressure Mr. Reid to do his job.

The constitutional system of checks and balances limits the House's ability to force the Senate majority leader to act. Republicans nonetheless have the means to elevate this issue in ways that could prove highly embarrassing to Mr. Reid and his party.

Mr. Reid may sense this is coming, which could explain his recent complaints about the filibuster. His intention is to suggest that it is Republicans—not the man in charge—who are to blame for Senate gridlock. The GOP has fought back vigorously against that canard, which is all to the good.

They'll have to do more. The Democrats' great victory in recent months has been in making the public forget that they own the majority of power in Washington, and laying everything on the GOP. Republicans need to remind the country of who, in fact, is at the wheel.

A version of this article appeared January 18, 2013, on page A13 in the U.S. edition of The Wall Street Journal, with the headline: Harry Reid's Great Disappearing Act.
Posted by Leo Rugiens at 5:49 AM