TRICK OR TREASON - TAKE YOUR PICK !!!

How the Clintons Get Away With It

The Clintons are protected from charges of corruption by their reputation for corruption. 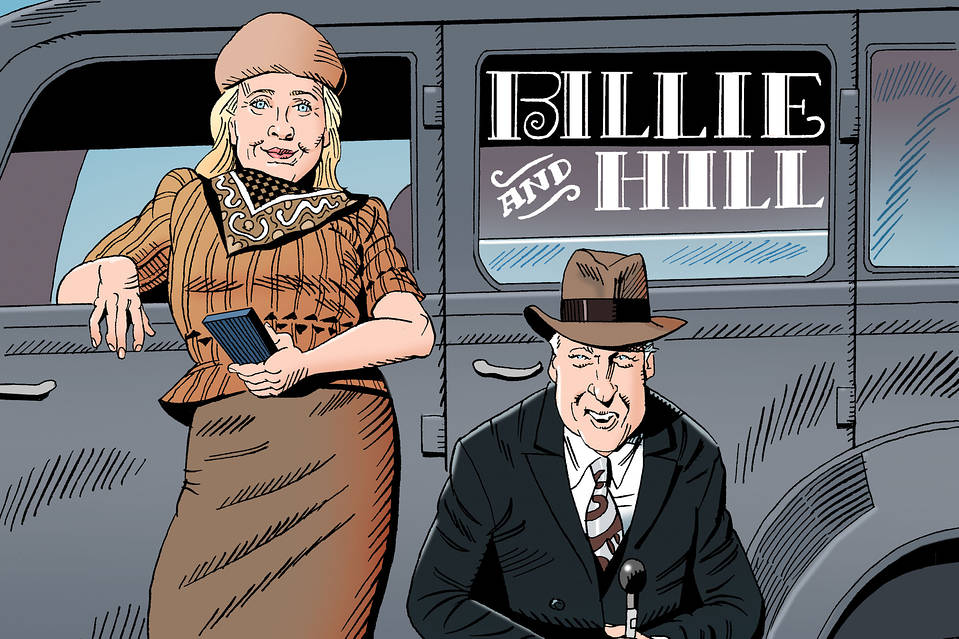 
There are 1065 comments.
NewestOldestReader Recommended

Forget about making any comparisons to any other political figure or opposite party illegal/immoral activities (I personally think all politicians are pretty much the same when it comes to selling out for personal gain). But let's just stay focused on the actual history of this person and ask for an in-depth investigation and report of all the things we know she has been involved with in the past. I don't care if it is no worse or equal to any of her contemporaries. Does that make her actions acceptable or permissible? Hey, investigate all of them and if none can pass a scrutiny for ethics, how about we keep looking for one that can? How does the standard "she's no worse than anyone  else previously elected or currently running" make her OK to elect???? This country is too far gone to salvage.

How do the Clintons get away with it ? There are several sites with lists of dead people close to the Clintons. One is called 'Arkancide.com'.

I think if James Webb gets into the race, the comparison between him and the Clintons would assure him of the nomination. I am an Independent who would vote for him. He has talked the talk and walked the walk.

Bonnie and Clyde?  That's absolutely an absurd comparison.  Clyde spent several years in prison.  They were not acquitted of anything.  They were both shot in a law enforcement ambush.  Bonnie was 23 and Clyde 25 when they died.  How Peggy can compare their brief career with the Clintons' is beyond me.

Who are you going to believe, the Clintons or your own lying eyes?

For many, all of this is meaningless the moment the dems tell us they love us and remind us that all our problems are someone else's fault.

The best way to not let the Clintons get away with corruption is to pulse rather than saturate media with their faults nonstop. Americans who do not view themselves as hard core right wing, and who are not fans of the Clintons, need positive forward looking alternatives. If the opinion pages obsess on Clinton, then you have nothing to showcase. You want to mention the Clintons in footnotes or completely avoid mentioning them. Try it, get some fresh air, stop and smell the roses.

Is it not interesting that NFL and others are ready to throw the book at Tom Brady for merely having the appearance of involvement in deflategate, versus the mountain of appearances with the Clintons?

@JOEL KARLINSKY why don't you go write for the New York Times?  The WSJ is for serious articles based on truth. Your comments are simply ad hominems based on your hatred.

I want to know more about all the other agencies that signed off on this as well.

For all that's been written about the Clintons recently, they're still standing and they'll continue to stand all the way to the steps of the Capitol on Jan 20.  This latest corruption has happened early on in the campaign, so by this time next year, no one will care or remember.

I reconnected a few yrs ago via FB w/some grammar school chums. Unfortunately, some of the gals think Hillary walks on water, and "oh, what she's going through."  Hill's acolytes and sycophants are getting the job done from what I can tell.  Create just enough (un)reasonable doubt. Remember, there's not a "shred of evidence."

The Dems are sticking by her because they owe her for 2008, especially those who voted for Preezy, and now wish they could press their own reset button.

The FBI's been neutered, it's a shell of itself.  DOJ is under Holder #2, the Republicans are in charge of Hse/Sen in name only, so, seriously folks, you think Hills and Wills will meet any justice?  Not in this lifetime.

How about Justice Department look into this instead of inappropriately inserting itself into city police actions involving black perpetrators.  The federal government has no business in local proceedings.  However, it is entirely appropriate and even imperative that they pursue allegations of corruption by a federal official - Secretary of State and presidential candidate Hillary Clinton. Who will force Justice to investigate and when will they demand action?

As long as a progressive liberal toes the party line -- any and all other behavior is OK.  It is not a requirement to be honest or trust worthy.  As long as your ideology is politically correct anything is acceptable.

Offer the unwashed masses whatever they want. By the time they realize they are not getting it we will be rich and long gone.

"America had just saved the world." True, but the world has changed dramatically since then, so much so, that cretins crawling from under dank rocks, namely William Jefferson and Hillary Rodham Clinton, are stars, actually no - make that, superstars - of America's political system. She might be a lock for the Dem nomination for president. But allow me to sketch a scenario: Bill Clinton, despite being a former President, is unworthy of respect. Let's go below decks on a deployed USN nuclear-powered aircraft carrier, where a maintenance crew feverishly is trying to return an E/F-18-G Growler aircraft to flying condition. Lacking this aircraft, the wing commander cannot implement strategy to protect the airborne tanker supporting the fighters and other carrier air wing assets. Bill, and Hillary too for that matter, strut, as they are known to do, preening, waiting for respect. Each of them will get a wrench, a 12-inch at least, pointed straight at their teeth. We're busy here, go away.

The Clintons have always known how to fight using Muhamad Allies' strategy of Rope-a-Dope! They just wait on the ropes, being pummeled, not fighting back, just ducking and weaving, until the public gets bored with the story and something else occupies the news cycle. Then they come out swinging with every liberal reporter in the nation swinging left and right hooks for them. The average Joe is just overwhelmed at the onslaught.

" Of course the Clintons are crooks, but their robbing for me" goes the ethics of the mass of Democratic voters.

This is the net results of telling folks for 50 years that the rich are robbing them. The sad thruth is: The Democratic party has been robbing them of far more than money; they steal opportunity, and independence, and leave you with them as your only means of survival.

The only Republican Hillary could beat would be Jeb Bush. Not that Bush is awful but the election would be about past Presidents and who was better.

Shame on the American people for even considering these two for President.

Americans will vote for a lovable rascal time and time again.  Our history is full of names like Boss Tweed, Budd Dwyer, Ray Blanton, Edwin Edwards, Huey Long, Earl Long, Spiro Agnew, Carroll Hubbard, James Traficant, Duke Cunningham.  Four of the last seven governors of Illinois... Otto Kerner, George Ryan, Rod Blagojevich, Dan Walker....went to prison.  The Clintons know that if they show their "Robin Hood" face to the American People, they will give them a pass and as Bill showed us before, once you are in the Oval Office, its hard to bring you down if the people like you.

@Richard Seale Please clarify: Who is the 'lovable rascal?' Surely you're not referring to Slick Willie &/or his accomplice Benghazi Hillary? If so , enlighten me. What am I missing? Slick Willie is unquestionably a world call schmoozer. One should be on DEFCON 1 anywhere in the vicinity of schmoozers of whatever political stripe. Not a word oozing from between their lips can be trusted; they care not for any but themselves. Slick Willie's the gold std for schmoozing. Benghazi Hillary not even close. Her strength is the sheer magnitude of her uncompromising, unrelenting hubris.

Whatever might characterize a 'lovable rascal,' the Clintons are as far from it as east is from west.

@Ken Williamson @Richard Seale Don't get upset at me.  I never said I thought the Dynamic Duo lovable.  I said that the general American voting public loves a rascal.  They prove it time and time again.

The greatest generation gave up their lives and made sacrifices so the next generation could be greedy and self absorbed. From greatest to greediest in one generation (baby boomers, I am embarrassed to be one). The Clintons are the poster children for their generation. Isn't it amazing that Hillary can be a spokesperson for wealth disparity in the US, you really can fool most of the people most of the time.

The Clintons have always believed that not getting caught in a lie is the same thing as telling the truth.
The real culprits in this fiasco, though, are the mainstream media talking heads and so called reporters. Hacks like Chuck Todd, George Stephaopoulos and the NYT would turn a blind eye if the Clintons shot up a convenience store. Ask yourself how this story would be playing out if Mr. Schweizer's book named a Rumsfeld or a Cheney as the protagonists. The DOJ and FBI would already be all over it.

This is what we've come to? A couple willing to sellout the assets of this country for their personal gain? This is what my father and uncle fought for in the Second World War? A Justice Department chomping at the bit to stir up racial hatred for the political ends of its' boss, while turning a blind eye at the monumental corruption of his friends? A lack of moral fortitude and the absence of patriotism is certainly the core element of being "Ready for Hillary".

This is not surprising behavior from these Arkansas Grifters. It is just selling nights in the Lincoln Bedroom on steroids. What is somewhat surprising is how many camp followers, spear carriers, and spear chuckers (how else to characterize Jimmy C and Lannie D?) rally to defend the indefensible.

Since it invariably comes up in partisan bickering whose voters are more knowledgeable, and I linked two youtube videos on Obama voters downthread, I thought it appropriate to give a fuller account of the polling done of Obama voters in 2008. Here it is again:

http://hotair.com/archives/2008/11/18/video-how-obama-got-elected/
(Includes more than video; has questions that were very 'challenging' for Obama voters in 2008).

We can only pray that this ignorance is not repeated, but unfortunately, the media will abet it.

Sadly, a majority of Americans no longer seem to care about ethics and morals when evaluating leaders. The Clintons have been engaged in the kind of behavior outlined in Ms. Noonan's article since their days in Arkansas, where they perfected the art of the shakedown. If political polls are any guide, Hillary appears to be on the fast track to being elected president in 2016. If we thought the Clintons' escapades were heretofore egregious, their final fling at exercising power will truly embellish their posterity in the annals of corruption.
Posted by Leo Rugiens at 10:34 AM