She's not the reason Americans can't stand their politicians.

The abuse being heaped on Sarah Palin is such a cheap shot.

The complaint against the Alaska governor, at its most basic, is that she doesn't qualify for admission to the national political fraternity. Boy, that's rich. Behold the shabby frat house that says it's above her pay grade. 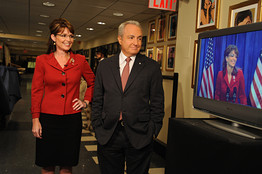 Congress has the lowest approval rating ever registered in the history of polling (12%!). She isn't the reason polls are showing people want the entire Congress fired, with many telling pollsters they themselves could do a better job.

Sarah Palin didn't design a system of presidential primaries whose length and cost ensures that only the most obsessional personalities will run the gauntlet, while a long list of effective governors don't run.

Out of this process has fallen a Democratic nominee who entered the U.S. Senate in 2005 fresh off a stint in the Illinois state legislature, with next to no record of political accomplishment. He may be elected mainly because, in Colin Powell's word, he is thought to be "transformational." One may hope so.

By not bothering to look very deeply at the details beneath either candidate's governing proposals, the media have created a lot of downtime to take free kicks at Gov. Palin. My former colleague, Tunku Varadarajan, has compiled a glossary of Palin invective, and I've added a few: "Republican blow-up doll," "idiot," "Christian Stepford wife," "Jesus freak," "Caribou Barbie," "a dope," "a fatal cancer to the Republican Party," "liar," "a national disgrace" and "her pretense that she is a woman."

If American politics is at low ebb, it is because so many of its observers enjoy working in its fetid backwash.

The primary discomfort with Gov. Palin is the notion that she doesn't have sufficient experience to be president, that Sen. McCain should have picked a Washington hand seasoned in the ways of the world. Such as? Here's an opinion poll question:

If as Joe Biden suggests the U.S. is likely to be tested by a foreign enemy next year, who of the following would you rather have dealing with it in the Oval Office: Nancy (of Damascus) Pelosi, Harry Reid, John Edwards, Joe (the U.S. drove Hezbollah out of Lebanon) Biden, Mike Huckabee, Geraldine Ferraro, Tom DeLay, Jimmy Carter or Sarah Palin?

My pick? Gov. Palin, surely the most grounded, common-sense person on that list of prime-time politicians.

The established political pros let the selection process come to this. Presidential candidates such as John McCain and Barack Obama have become untethered from the discipline of party institutions, largely because the parties have lost coherence. So we get celebrity candidates made famous, fundable and electable by dint of their access to the Beltway media. For voters, this election is a national Hail Mary.

For nearly two years, all the major candidates have rotated through our lives as solitary personalities attended by careerist campaign professionals. Barack, Hillary, Rudy, Mitt, Mike, McCain. When the moment arrived to pick a running mate, input from the parties was minimal. That famous party boss, Caroline Kennedy, advised Barack Obama. They picked a three-decade denizen of the Senate. John McCain's obligation was himself and his endless slog to this big chance.

The quick surge of party-wide excitement and campaign contributions after his selection of Sarah Palin made clear that the McCain candidacy was moribund and headed for a low-turnout debacle. If he had picked any of the plain-vanilla men on his veep short list -- Pawlenty, Sanford, Romney or Lieberman -- they'd have won approval from the media's college of cardinals, and killed his campaign.

The stoning of Sarah Palin has exposed enough cultural fissures in American politics to occupy strategists full-time until 2012. We now see there is a left-to-right elite centered in New York, Washington, Hollywood and Silicon Valley who hand down judgments of the nation's mortals from their perch atop the Bell Curve.

It seems only yesterday that the most critical skill in presidential politics was being able to connect to people in places like Bronko's bar or Saddleback Church. When Gov. Palin showed she excelled at that, the goal posts suddenly moved and the new game was being able to talk the talk in London, Paris, Tehran or Moscow. She looks about a half-step behind Sen. Obama on that learning curve.

Lorne Michaels, the executive producer of "Saturday Night Live," lives on the forward wave of American life. This week he gave his view of Sarah Palin to EW.com:

"I think Palin will continue to be underestimated for a while. I watched the way she connected with people, and she's powerful. Her politics aren't my politics. But you can see that she's a very powerful, very disciplined, incredibly gracious woman. This was her first time out and she has had a huge impact. People connect to her."

Uh-oh. Sounds like the cancer could be in remission.