WHAT A DIFFERENCE A DAY MAKES, TWENTY-FOUR LITTLE HOURS. DOCTOR GLOOM IS NOW MR. FUNNY FACE - CHEER UP, ALL IS WELL! 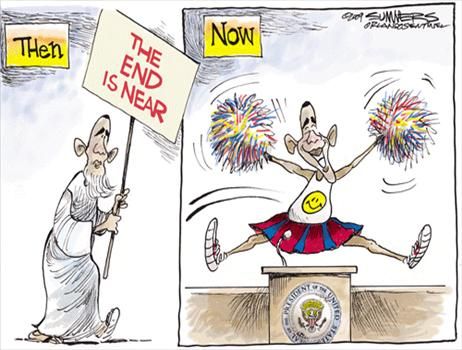 President Obama's speech to Congress has been properly called Rooseveltian -- active, upbeat and unadorned. Like Franklin Roosevelt, Obama is a great explainer -- simple without being simplistic. And the very act of effective explanation is reassuring. Clear exposition implies intellectual mastery, which implies competence, which builds confidence.

For Roosevelt, such confidence was not just a style but also a creed. It is a consistent theme of liberal economics since the New Deal that rhetoric is a tool of policy -- that the soothing of fear and doubt is essential to restoring the normal function of credit and entrepreneurship. As John Kenneth Galbraith said, "By affirming solemnly that prosperity will continue, it is believed, one can help insure that prosperity will in fact continue. Especially among businessmen the faith in the efficiency of such incantation is very great."

But national morale was not economically decisive in defeating the Great Depression (though it came in handy defeating Hitler). Economic historian Amity Shlaes reminds us, "Roosevelt did famously well by one measure, the political poll. He flunked by two other meters that we today know are critically important: the unemployment rate and the Dow Jones industrial average."

And the incantation of confidence is not likely to be decisive in the current economy. Markets, investors, businessmen and entrepreneurs are generally immune to tone and charm. They seek reassurance on three issues of substance: the credibility of the credit system, the eventual return of economic growth and a serious approach to debt.

Obama was strongest when it came to rescuing the banking system, promising to "act with the full force of the federal government" and to do "whatever proves necessary" to assure the flow of lending. This was an assertion of executive power in a time of crisis that Roosevelt would have understood and appreciated. The bank bailout is radical, involving the socialization of private-sector losses and a government plan to "force the necessary adjustments," "clean up their balance sheets" and ensure "continuity." But the alternatives to executive power in this case seem dismal. As an economic pragmatist, I was reassured.

On the issue of economic growth, Obama was less compelling. He talked of the need to "jump-start job creation" through public spending, admitting that "there are some in this chamber and watching at home who are skeptical of whether this plan will work." He answered those concerns by saying that "wasteful spending" would be met with "unprecedented oversight." But this is the old debater's trick of responding to an opponent's weakest objection.

The source of skepticism for many Americans is not the prospect of government waste but Obama's theory of job creation. It sounds somehow passe to assert it, but most jobs are created by private capital in the private sector, often by small businesses. And they got little policy attention in Obama's speech. An example Obama used -- retaining police officers -- is a worthy cause, but hardly typical of American job-creation. A small-business owner heard nothing about his daily struggles with litigation or regulation.

There is an element of psychology -- of confidence -- in taking the risks of entrepreneurship and small-business expansion. It is difficult to imagine how that confidence is built by being ignored.

Obama was even less credible on the issue of debt. Most Americans seem to accept the need for the temporary deficit spike to provide a jolt to the economy. But Obama's pledges to go "line by line through the federal budget" and to remove "waste, fraud and abuse" were the most tired portions of his energetic speech -- and simply not credible with Speaker Nancy Pelosi in vivid green over his left shoulder.

On long-term debt -- the crisis of unsustainable entitlements in an aging society -- Obama was timid. These massive, future obligations raise the prospect of higher interest rates and inflation, and threaten to crowd out spending on a variety of national and humanitarian goals. Many would eagerly accept large short-term deficits in exchange for a grand bargain to get entitlement spending under control. There are innovative ideas being floated on Capitol Hill, such as the SAFE Commission, which would recommend entitlement reforms and present those proposals to Congress for an up-or-down vote. Obama did not choose to spend his political capital on confronting the entitlement crisis -- which is understandable, but hardly courageous.

Obama's rhetoric this week was reassuring. But on the economy, many of us are only partially reassured.


Barack Hussein Obama aka Barry Soetoro
is not eligible to be President of the United States
because he is not a Natural Born Citizen
as required by Article Two, Section One, Clause Five
of the United States Constitution regardless of
where he was born (Mombassa, Hawaii, Chicago,the moon)
because he was not born of TWO PARENTS
BOTH OF WHOM WERE UNITED STATES CITIZENS
at the time of his birth. His father was a citizen/subject
of Kenya/Great Britain.
Check it out: