THE COMING PEASANT REVOLT OF 2010 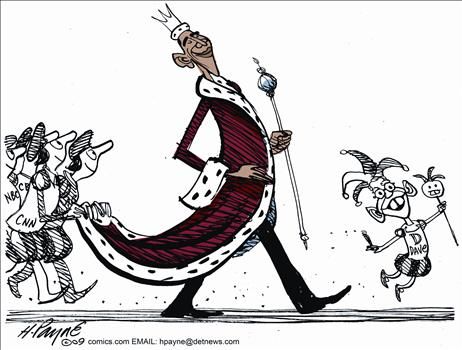 "I am not an ideologue," protested President Obama
at a gathering with Republican House members last week.
Perhaps, but he does have a tenacious commitment to a set of political convictions.

Compare his 2010 State of the Union to his first address to Congress a year earlier. The consistency is remarkable. In 2009, after passing a $787 billion (now $862 billion) stimulus package, the largest spending bill in galactic history, he unveiled a manifesto for fundamentally restructuring the commanding heights of American society -- health care, education and energy.

A year later, after stunning Democratic setbacks in Virginia, New Jersey and Massachusetts, Obama gave a stay-the-course State of the Union address (a) pledging not to walk away from health-care reform, (b) seeking to turn college education increasingly into a federal entitlement, and (c) asking again for cap-and-trade energy legislation. Plus, of course, another stimulus package, this time renamed a "jobs bill."

This being a democracy, don't the Democrats see that clinging to this agenda will march them over a cliff? Don't they understand Massachusetts?

Well, they understand it through a prism of two cherished axioms: (1) The people are stupid and (2) Republicans are bad. Result? The dim-witted, led by the malicious, vote incorrectly.

Liberal expressions of disdain for the intelligence and emotional maturity of the electorate have been, post-Massachusetts, remarkably unguarded. New York Times columnist Charles Blow chided Obama for not understanding the necessity of speaking "in the plain words of plain folks," because the people are "suspicious of complexity." Counseled Blow: "The next time he gives a speech, someone should tap him on the ankle and say, 'Mr. President, we're down here.' "

A Time magazine blogger was even more blunt about the ankle-dwelling mob, explaining that we are "a nation of dodos" that is "too dumb to thrive."

Obama joined the parade in the State of the Union address when, with supercilious modesty, he chided himself "for not explaining it [health care] more clearly to the American people." The subject, he noted, was "complex." The subject, it might also be noted, was one to which the master of complexity had devoted 29 speeches. Perhaps he did not speak slowly enough.

Then there are the emotional deficiencies of the masses. Nearly every Democratic apologist lamented the people's anger and anxiety, a free-floating agitation that prevented them from appreciating the beneficence of the social agenda the Democrats are so determined to foist upon them.

That brings us to Part 2 of the liberal conceit: Liberals act in the public interest, while conservatives think only of power, elections, self-aggrandizement and self-interest.

It is an old liberal theme that conservative ideas, being red in tooth and claw, cannot possibly emerge from any notion of the public good. A 2002 New York Times obituary for philosopher Robert Nozick explained that the strongly libertarian implications of Nozick's masterwork, "Anarchy, State, and Utopia," "proved comforting to the right, which was grateful for what it embraced as philosophical justification." The right, you see, is grateful when a bright intellectual can graft some philosophical rationalization onto its thoroughly base and self-regarding politics.

This belief in the moral hollowness of conservatism animates the current liberal mantra that Republican opposition to Obama's social democratic agenda -- which couldn't get through even a Democratic Congress and powered major Democratic losses in New Jersey, Virginia and Massachusetts -- is nothing but blind and cynical obstructionism.

By contrast, Democratic opposition to George W. Bush -- from Iraq to Social Security reform -- constituted dissent. And dissent, we were told at the time, including by candidate Obama, is "one of the truest expressions of patriotism."

No more. Today, dissent from the governing orthodoxy is nihilistic malice. "They made a decision," explained David Axelrod, "they were going to sit it out and hope that we failed, that the country failed" -- a perfect expression of liberals' conviction that their aspirations are necessarily the country's, that their idea of the public good is the public's, that their failure is therefore the nation's.

Then comes Massachusetts, an election Obama himself helped nationalize, to shatter this most self-congratulatory of illusions.

For liberals, the observation that "the peasants are revolting" is a pun. For conservatives, it is cause for uncharacteristic optimism. No matter how far the ideological pendulum swings in the short term, in the end the bedrock common sense of the American people will prevail.

The ankle-dwelling populace pushes back. It recenters. It renormalizes. Even in Massachusetts.