HOW CAN A $3.83 TRILLION BUDGET "FREEZE SPENDING?" 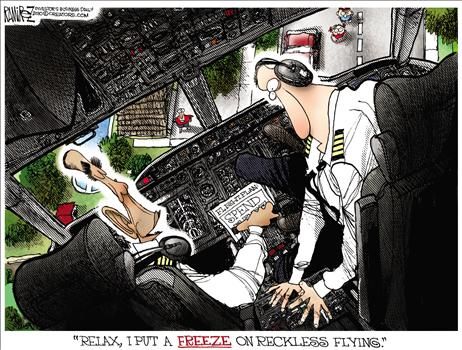 We are incentivizing financial unsustainability.

At the National Prayer Breakfast, Barack Obama singled out for praise Navy Corpsman Christian Bouchard. Or as the president called him, “Corpseman Bouchard.” Twice.

Hey, not a big deal. Throughout his life, the commander-in-chief has had little contact with the military, and less interest. And, when you give as many speeches as this guy does, there’s no time to rehearse or read through: You just gotta fire up the prompter and wing it. But it’s revealing that nobody around him in the so-called smartest administration of all time thought to spell it out phonetically for him when the speech got typed up and loaded into the machine. Which suggests that either his minders don’t know that he doesn’t know that kinda stuff, or they don’t know it either. To put it in Rumsfeldian terms, they don’t know what they don’t know.

Which is embarrassingly true. Hence, the awful flop speeches, from the Copenhagen Olympics to the Berlin Wall anniversary video to the Martha Coakley rally. The palpable whiff given off by the White House inner circle is that they’re the last people on the planet still besotted by Barack Obama, and that they’re having such a cool time starring in their own reality-show remake of The West Wing they can only conceive of the public — and, indeed, the world — as crowd-scene extras in The Barack Obama Show: They expect you to cheer and wave flags when the floor-manager tells you to, but the notion that in return he should be able to persuade you of the merits of his policies seems entirely to have eluded them.

But, since Obama’s mispronunciation is a pithier summation of the State of the Union than any of the dreary 90-minute sludge he paid his speechwriters for, let us consider it: Is America a Corpseman walking?

Well, we’re getting there. National Review’s Jim Geraghty sums up Obama’s America thus: “Unsustainable is the new normal.” Indeed. The other day, Douglas Elmendorf, director of the Congressional Budget Office, described current deficits as “unsustainable.” So let’s make them even more so. The president tells us, with a straight face, that his grossly irresponsible profligate wastrel of a predecessor took the federal budget on an eight-year joyride, so the only way his sober, fiscally prudent successor can get things under control is to grab the throttle and crank it up to what Mel Brooks in Spaceballs (which seems the appropriate comparison) called “Ludicrous Speed.”

Obama’s spending proposes to take the average Bush deficit for the years 2001–2008, and double it, all the way to 2020. To get out of the Bush hole, we need to dig a hole twice as deep for one-and-a-half times as long. And that’s according to the official projections of his Economics Czar, Ms. Rose Colored-Glasses. By 2015, the actual hole may be so deep that even if you toss every Obama speech down it on double-spaced paper you still won’t be able to fill it up. In the spendthrift Bush days, federal spending as a proportion of GDP average 19.6 percent. Obama proposes to crank it up to 25 percent as a permanent feature of life.

But, if they’re “unsustainable,” what happens when they can no longer be sustained? A failure of bond auctions? A downgraded government debt rating? Reduced GDP growth? Total societal collapse? Mad Max on the New Jersey Turnpike?

Testifying to the House Budget Committee, Director Elmendorf attempted to pull back from the wilder shores of “unsustainable”: “I think most observers expect that the government will act, that the unsustainability will be resolved through action, not through witnessing some collapse down the road,” he said. “If literally nothing is done, then eventually something very, very bad happens. But I think the widespread view is that you and your colleagues will take action.”

Dream on, you kinky fantasist. The one thing that can be guaranteed is that a political class led by Harry Reid, Nancy Pelosi, Barney Frank, a handful of reach-across-the-aisle Republican accommodationists, and an economically illiterate narcissist in the Oval Office is never going to rein in unsustainable spending in any meaningful sense. That leaves Director Elmendorf’s alternative scenario. What was it again? Oh, yeah: “Some collapse down the road.”

Speaking of roads, I see that, according to USA Today, when the economic downturn began, the U.S. Department of Transportation had just one employee making over $170,000. A year and a half later, it has 1,690.

Did you get your pay raise this year? What’s that, you don’t work for the government? Yes, you do, one way or another. Good luck relying on Obama, Pelosi, Frank, and the other Emirs of Kleptocristan “taking action” to “resolve” that. In the last month, the cost of insuring Greece’s sovereign debt against default has doubled. Spain and Portugal are headed the same way. When you binge-spend at the Greek level in a democratic state, there aren’t many easy roads back. The government has introduced an austerity package to rein in spending. In response, Greek tax collectors have walked off the job.

Read that again slowly: To protest government cuts, striking tax collectors are refusing to collect taxes. In a sane world, this would be a hilarious TV comedy sketch. But most of the Western world is no longer sane. It’s tough enough to persuade the town drunk to sober up, but when everyone’s face down in the moonshine, maybe it’s best just to head for the hills. But where to flee? America is choosing to embrace Greece’s future when even the Greeks have figured out you can’t make it add up. Consider the opening paragraph of Martin Crutsinger, “AP Economics Writer”: “WASHINGTON — President Barack Obama sent Congress a $3.83 trillion budget on Monday that would pour more money into the fight against high unemployment, boost taxes on the wealthy and freeze spending for a wide swath of government programs.”

What language is that written in? How can a $3.83 trillion budget “freeze spending”? And where’s the president getting all this money to “pour” into his “fight” against high unemployment? Would it perchance be from the same small businesses that might be hiring new workers if the president didn’t need so much money to “pour” away? Heigh-ho. Maybe we can all be striking tax collectors. It seems a comfortable life . . .

If unsustainable is the new normal, it should also be the new national anthem. Take it away, Natalie Cole:

Instead, all four are rocketing up: We are incentivizing unsustainability, and, when it comes to “some collapse down the road,” you’ll be surprised how short that road is.