THE GIRLS ENSLAVED BY BOKO HARAM HAVE HILLARY CLINTON TO THANK 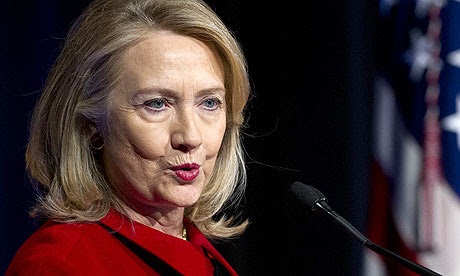 
Morning Jolt
. . . with Jim Geraghty
NATIONAL REVIEW ONLINE
May 8, 2014
Whoops! Guess What Hillary Didn't Do While She Was Secretary of State . . .
Boy, this is awkward:

Under Hillary Clinton, the State Department repeatedly declined to fully go after the terror group responsible for kidnapping hundreds of girls.
The State Department under Hillary Clinton fought hard against placing the al Qaeda-linked militant group Boko Haram on its official list of foreign terrorist organizations for two years. And now, lawmakers and former U.S. officials are saying that the decision may have hampered the American government's ability to confront the Nigerian group that shocked the world by abducting hundreds of innocent girls.
In the past week, Clinton, who made protecting women and girls a key pillar of her tenure at the State Department, has been a vocal advocate for the 200 Nigerian girls kidnapped by Boko Haram, the loosely organized group of militants terrorizing northern Nigeria.
What Clinton didn't mention was that her own State Department refused to place Boko Haram on the list of foreign terrorist organizations in 2011, after the group bombed the UN headquarters in Abuja. The refusal came despite the urging of the Justice Department, the FBI, the CIA, and over a dozen Senators and Congressmen.
"The one thing she could have done, the one tool she had at her disposal, she didn't use. And nobody can say she wasn't urged to do it. It's gross hypocrisy," said a former senior U.S. official who was involved in the debate. "The FBI, the CIA, and the Justice Department really wanted Boko Haram designated, they wanted the authorities that would provide to go after them, and they voiced that repeatedly to elected officials."

Anybody else think we'll be hearing a lot about Boko Haram between now and Election Day 2016?
Posted by Leo Rugiens at 7:40 AM No comments: