THE WISCONSIN DISPUTE IS ALL ABOUT POWER

The Means of Coercion

The privileged are revolting in Wisconsin.

To make sense of what's going on in Wisconsin, it helps to understand that the left in America lives in an ideological fantasy world. The dispute between the state government and the unions representing its employees is "about power," Paul Krugman of the New York Times observes accurately, before going off the rails:

What [Gov. Scott] Walker and his backers are trying to do is to make Wisconsin--and eventually, America--less of a functioning democracy and more of a third-world-style oligarchy. And that's why anyone who believes that we need some counterweight to the political power of big money should be on the demonstrators' side.

The decline of unions over the past few decades has left corporations and the rich with essentially no powerful opposition. No matter what doubts you might have about unions and their role in the economy, never forget that destroying them destroys the only real organized check on the power of the business community in America. If the last 30 years haven't made that clear, I don't know what will.

There are several problems with this line of thinking. First, to talk of America in terms of "class" is to speak a foreign language. Outside of university faculties and Marxist fringe groups (but we repeat our self), Americans do not divide ourselves up by class; rather, "We hold these truths to be self-evident, that all men are created equal . . ."

When Americans describe themselves as "middle class," the term is a synonym for "ordinary" or "respectable," not part of a taxonomy of division. Actual middle-class Americans don't feel put upon by "corporate power" or "the business community," because by and large, they own the means of production: They run businesses; they hold shares in corporations through their investment and retirement accounts. Some belong to unions, but the vast majority do not: "In 2010, the union membership rate--the percent of wage and salary workers who were members of a union--was 11.9 percent, down from 12.3 percent a year earlier," according to the Bureau of Labor Statistics. 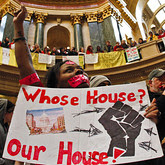 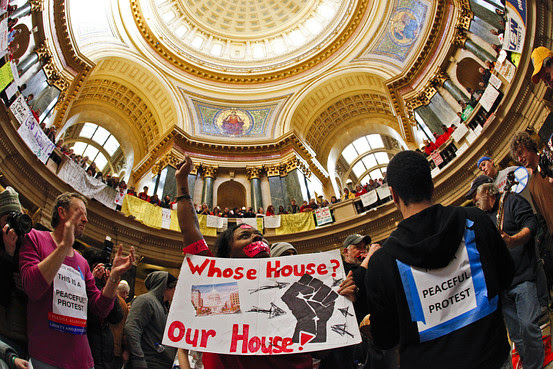 The "labor movement" in America has increasingly come to consist of people who work for government, not private companies. As the BLS notes, the union-participation rate for public-sector workers in 2010 was 36.2%, vs. just 6.9% for private-sector workers.

There is a fundamental difference between private- and public-sector workers. A private-sector labor dispute is a clear clash of competing interests, with management representing shareholders and unions representing workers. In the public sector, as George Will notes, taxpayers--whose position is analogous to that of shareholders--are usually denied a seat at the table:

Such unions are government organized as an interest group to lobby itself to do what it always wants to do anyway - grow. These unions use dues extracted from members to elect their members' employers. And governments, not disciplined by the need to make a profit, extract government employees' salaries from taxpayers. Government sits on both sides of the table in cozy "negotiations" with unions.

Collective bargaining in the public sector thus is less a negotiation than a conspiracy to steal money from taxpayers. The notion that this is "in the economic interests of the middle class" for government employees in Wisconsin and elsewhere to get above-market wages and extremely lavish benefits is just laughable. Sure, government employees are "middle class," but so are the vast majority of taxpayers who don't enjoy the special privileges that come from owning the means of coercion.

Commentary's Jennifer Dyer argues that the Wisconsin dispute--likely the first of many, as states and localities face up to the unsustainable costs they have imposed on taxpayers via such collusion with unions--reflects a "crisis of progressivism":

The term "progressive" has been batted around in various incarnations over the last decade, but in its original sense in U.S. politics--the sense popularized by the Wisconsin Progressives and the spinoffs from their movement--progressivism was about enlarging the government's supervisory role over society and entrusting the administration of that role to experts employed in public agencies. . . .

The agencies were sold to the public as a means of taking the corrupt politics out of issues that ought to be decided straightforwardly by disinterested experts. The progressive idea has always been that this stable of public experts should be insulated from the demands of interest groups--even if the interest group in question is a majority of registered voters.

The Wisconsin Republicans are challenging that idea directly. The vociferous political left isn't wrong about that: the crisis in Wisconsin is a power struggle for the future of government, not just a clash of this year's fiscal priorities. If the voting public can, in fact, deny professional autonomy--in this case, the option to organize for collective bargaining--to public employees, the essential premise of progressivism is badly undercut. Public employees, in their professional capacity, would not then have a "right" to anything the voters don't choose to accede to. That would include the scope of their agencies' portfolios as well as the terms of employment for government workers.

It's an intriguing argument, but it doesn't seem quite right to us. Unionized government employees are not, by and large, professional "experts." If any government workers are undercompensated relative to their private-sector counterparts, it is those with special expertise--lawyers, scientists, economists, top administrators. Public-sector union members mostly have commoner abilities, for which they are overpaid. 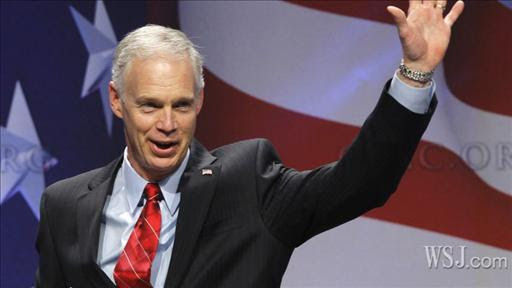 Sen. Ron Johnson (R., Wis.) on the budget battles in Washington and back home.

Here is the contradiction of progressivism. Progressives tell us they want the government to do more. But they can't win elections without public-sector unions. Because they are beholden to those unions, their main priority when in power is to increase the cost, not the scope, of government. Because resources are finite, the result is the worst of both worlds: a government that taxes more without doing more. This is unsustainable economically. Fortunately, as Wisconsin voters showed last November, it's unsustainable politically as well.

'Push Back Hard'--Again
"The unions should make their voices heard and push back hard," editorializes the New York Times, one of the few newspapers to support the Wisconsin antitaxpayer revolt unreservedly. "Push back hard" must be a macro on the computers over at the Times editorial page, which demanded back in August that supporters of the Ground Zero Mosque "push back hard" against ordinary Americans. In the meantime, of course, the Times has delivered many a pious lecture on the evil of "incivility" in politics.

It's quite striking the way almost every lie the left ever told about the Tea Party has turned out to be true of the government unionists in Wisconsin and their supporters:

• Extreme rhetoric. The Wisconsin Republican Party has produced what Mediaite.org calls an "incredibly effective" video juxtaposing liberal complaints about allegedly extremist Tea Party rhetoric with unionist signs likening Gov. Walker to Hitler and other dictators. Left-wing journalists are making similar invidious comparisons: "Workers Toppled a Dictator in Egypt, but Might Be Silenced in Wisconsin" read the headline of a Washington Post column by Harold Meyerson last week. The other day on CNN we saw scenes of a Madison crowd chanting, "Kill the bill"--which was said to be violent and invidious a year ago, when "the bill" was ObamaCare.

• Violence. Blogress Ann Althouse, a state employee based in Madison, posted a video of municipal salt trucks blowing their horns in support of the unionists. A YouTube commenter responded (quoting verbatim), "whoever video taped this has no life and should be shot in the head." Unlike Frances Fox Piven, Althouse has never advocated violence, but don't expect the Times to give this the kind of coverage it gave Piven's claims that she had received threatening emails.

• Partisan AstroTurf. That's the Beltway term referring to a fake grassroots movement. Politico reported last week that "the Democratic National Committee's Organizing for America arm--the remnant of the 2008 Obama campaign--is playing an active role in organizing protests." A blogger at the OFA website, BarackObama.com, writes: "To our allies in the labor movement, to our brothers and sisters in public work, we stand with you, and we stand strong." We've also received emails from MoveOn.org, which says it's holding a pro-unionist rally outside our offices later this afternoon. Sorry, MOO, we're working at home today.

• Refusal to accept election results. Although Republicans have a majority in the Wisconsin Senate, Democrats have fled the state, taking advantage of the body's rules to deny the majority a quorum. The Indianapolis Star reports that Democrats from the Indiana House are employing the same tactic. Even Barack Obama, when he was an Illinois senator, usually voted "present."

• Stupidity. Remember "Teabonics," a photo album of misspelled Tea Party signs? The unionists can't spell any better--and some of them are teachers! Althouse got one photo of what we think is a woman holding a sign that reads " 'Open for business' = Closed for Negotiatins [sic]." Also, some of the teachers' tactics--in particular, fraudulently calling in sick and exploiting other people's children by enlisting them as protesters--seem not only unethical but calculated to repel the public. One blessing of low standards for public school teachers is that it ensures many of them are not bright enough to stage an effective protest.

The one exception: So far we haven't seen any evidence of racism by the Wisconsin unionists. But we're watching for it.