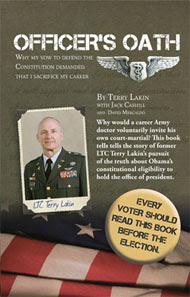 Jerome R. Corsi, a Harvard Ph.D., is a WND senior staff reporter. He has authored many books, including No. 1 N.Y. Times best-sellers "The Obama Nation" and "Unfit for Command." Corsi's latest book is "Where's the REAL Birth Certificate?"
inShare30


“Officer’s Oath: Why My Vow to Defend the Constitution Demanded That I Sacrifice My Career” is Lt. Col. Terry Lakin’s moving first-hand account of faith and patriotism that led to court-martial, imprisonment and the stripping of all military rank and privileges, including his Army pension.
Lakin, an Army flight surgeon, was court-martialed because he refused to obey deployment orders, arguing Barack Obama had not documented his eligibility for the presidency under Article 2, Section 1, of the Constitution.

“What I do not understand and still don’t,” Lakin writes, “is why Obama did not just come forward with his key documents and be done with it. Instead, he ordered all of his important records to be kept sealed.

Addressing both the short-form and the long-form birth certificates released by the White House, Lakin notes they are digital scans of purportedly official documents, neither of which would be acceptable as evidence in a court proceeding.

“So tell me: Who has something to hide?” he asks. “It would seem to be President Obama, and sooner or later the voters of this country are going to make it clear that his stonewalling cannot continue.”
Lakin has explained that he was compelled by his officer’s oath to uphold and defend the Constitution when he was ordered to deploy to Afghanistan. Along with questions about the authenticity of the Obama birth documents, some constitutional scholars argue Obama is not a natural born citizen because his father was not an American citizen.

Ironically, Lakin’s deployment orders required him to bring five copies of his birth certificate.
“I had read the orders several times and had glossed over a detail that had previously seemed routine, but this time I felt like Wile E. Coyote getting smacked by an anvil,” he writes. “I needed a birth certificate to deploy, but the president did not need one to order my deployment. This was nuts.”
Lakin’s day of decision was April 12, 2010.

That day he packed his car as though he were going to be on Flight 1123 out of Baltimore/Washington International Airport at 8:20 a.m. He expected to check into Fort Campbell, Ky., no later that 3 p.m. that afternoon.

Instead, he headed to the Pentagon, where he took a photo of himself with his bags to prove he was still willing to deploy if Obama’s eligibility could be validated.

When he was court-martialed for refusing to obey orders, he found himself looking at the paintings on the wall behind the jury members.

He writes:
As fate would have it, these were portraits of various Founding Fathers, and I wondered what they would be thinking. I strongly suspected they would be seeking the truth, about Obama’s citizenship status, about his Connecticut Social Security number (there is no reason why Obama would have a Connecticut number), about the multitude of unanswered questions surrounding this man. Here, however, to emphasize the real issues would likely have resulted in a reprimand from the judge and a harsher sentence from the jury. How, I wondered, had our country descended to this level of apathy?

Lakin writes an equally emotional passage about his final moments of freedom with his family.
What does one say to a wife and children before leaving for prison? I tried to instill in my seven-year-old the conviction that he was now the man of the house and needed to take care of the family. I told my eleven-year-old daughter to be the best help to her mom she could be. All the while I was holding back the tears lest I set off my little one and turn this into an emotional free-for-all.

Lakin contends Congress should have demanded Obama show his birth credentials when he declared he was a presidential candidate in Springfield, Ill., on Feb. 10, 2007.

The officer’s downfall was his determination to seek the truth about Obama’s eligibility when the establishment media showed no interest in it.

Supporters say that by prosecuting Lakin, the United States military abandoned the principles articulated by the Nuremburg Trial at the end of World War II asserting the Nazi military and government officials had a responsibility of conscience to adhere to a higher order of morality than simply follow orders.

Lakin proclaimed his loyalty to the higher order of the oath he took as an officer, choosing on moral grounds to disobey the orders he was issued by a commander-in-chief who refused to allow the Hawaii Department of Health to open the vault and show the world Obama’s original 1961 birth records, if any truly exist.