OBAMA TOLD GEORGE STEPHANOPOLIS THAT HE IS PROUD OF HIS MUSLIM FAITH, HE CONTINUES TO PROVE IT 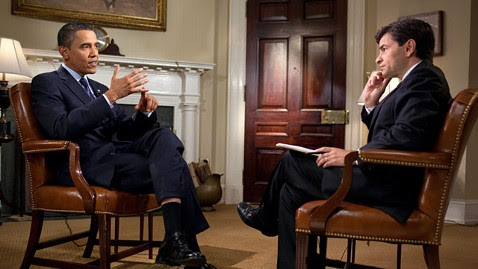 White House celebrates another Muslim holiday for the first time


0
The White House celebrated it’s first-ever Eid al-Adha this week, a Muslim holiday celebrating the end of the Hajj, the holy pilgrimage to Mecca:


TODAY’S ZAMAN – The White House hosted an event to celebrate Eid al-Adha on Tuesday for the first time ever with the sponsorship of the Rumi Forum, an international organization established by Turks living in Washington, D.C., to foster intercultural dialogue.
The White House traditionally hosts an iftar (fast-breaking) dinner every year for representatives of Muslim communities in the United States, but Tuesday’s event was the first time that they have hosted a celebratory event for Eid al-Adha, upon the suggestion of Rumi Forum. The opening speech of the event was made by White House Public Relations Office Deputy Director Ashley Allison and Rumi Forum President Emre Çelik.
The forum, of which Islamic scholar Fethullah Gülen is the honorary chairman, provided food for the event.
Speaking to Today’s Zaman, Çelik said Rumi Forum came up with the idea to host a celebratory event for Eid al-Adha with the attendance of representatives from different religions. The event was attended by about 60 people from various interfaith organizations in Washington, including representatives from Christian and Jewish organizations in the US, as well as Muslims.

For Obama to be a Christian, his White House sure does celebrate a lot of Muslim Holidays.
John Kerry made remarks at this event and you can read his full remarks here. But here is what he said that created controversy in Israel:


“I think that it is more critical than ever that we be fighting for peace, and I think it is more necessary than ever… As I went around and met with people in the course of our discussions about the ISIL (Islamic State) coalition, the truth is we – there wasn’t a leader I met with in the region who didn’t raise with me spontaneously the need to try to get peace between Israel and the Palestinians, because it was a cause of recruitment and of street anger and agitation that they felt.”

This caused Naftali Bennett to slam those remarks, suggesting a link between the Israel-Palestinian peace process and recruitment for ISIS:


Economy Minister Naftali Bennett slammed US Secretary of State John Kerry on Friday for comments the top American diplomat made, indicating that the unresolved conflict between the Israelis and Palestinians is contributing to gain made by the Islamic State group.
“Asserting that the Israeli-Palestinian conflict reinforces ISIS, gives a boost to global terrorism,” Bennett charged.
“It turns out that even when a British Muslim beheads a British Christian, there will always be those who blame the Jews,” Bennett said in reference to videos of recent decapitations of Western captives by an Islamic State member who speaks with an English accent.
He added that there is no justification for terrorism and that Israeli is fighting against the phenomenon.