WHAT KIND OF COMMANDER-IN-CHIEF OF U.S. ARMED FORCES HAS BARACK HUSSEIN OBAMA BEEN? 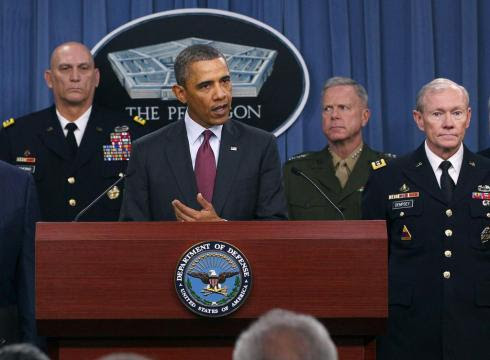 THEY DO NOT LOOK TOO HAPPY

Since Barack Obama has been in the White House, high ranking military officers have been removed from their positions at a rate that is absolutely unprecedented.

Things have gotten so bad that a number of retired generals are publicly speaking out about the 'purge' of the U.S. military that they believe is taking place. As you will see below, dozens of highly decorated military leaders have been dismissed from their positions over the past few years.

Sowhy is this happening? What is going on right now is absolutely crazy especially during a time of peace. Is there a deliberate attempt to reshape the military and remove those who don't adhere to the proper 'viewpoints' ? Does someone out there feel a need to get officers that won't cooperate out of the way?

Throughout world history, whatever comes next after a military purge is never good. Perhaps you are reading this and you think that 'purge' is too strong a word for what is taking place.

If this continues, what is the U.S. military going to look like in a few years?

- Retired Army Major General Paul Vallely: “The White House protects their own. That's why they stalled on the investigation into Fast andFurious, Benghazi and Obamacare. He's intentionally weakening and gutting our military, Pentagon and reducing us as a superpower, and anyone in the ranks who disagrees or speaks out is being purged.”

- Retired Army Major General Patrick Brady: “There is no doubt he (Obama) is intent on emasculating the military and will fire anyone who disagrees with him.”

- Retired Army Lt. General William G. Jerry Boykin: “Over the past three years, it is unprecedented for the number of four-star generals to be relieved of duty, and not necessarily relieved for cause.”

- Retired Navy Captain Joseph John: “I believe there are more than 137 officers who have been forced out or given bad evaluation reports so they will never make Flag (officer), because of their failure to
comply to certain views.”

A Pentagon official, who asked to remain nameless because they were not authorized to speak on the matter, said even young officers, down through the ranks have been told not to talk about Obama or the politics of the White House. They are purging everyone and if you want to keep your job just keep your mouth shut. Now this trend appears to be accelerating.

General Vallely's comment: “Absolutely every communist regime on the planet did this as soon as they got in power.”
Posted by Leo Rugiens at 1:05 PM