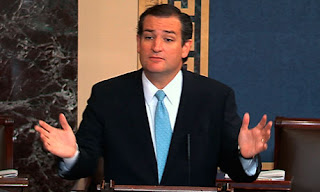 Photo of Senator Ted Cruz calling out Senate Majority Leader Mitch McConnell for lying to the Republican members of the Senate.
.
.
.


All during the 2016 primary season I warned that the Dems wanted Trump to win the nomination rather than Cruz.  One of the reasons was because Cruz was a world champion debater and Hillary would not stand a chance against Cruz in debates.

So the Dems played it smart and withheld all of their damaging tapes against Trump and are only releasing them now just days before the November 8 election.  That way they made it easier for Trump to defeat Cruz for the nomination.

Republican leadership is incompetent, beginning with the leadership in Congress that could not forgive Cruz for calling Senate Majority Leader Mitch McConnell a "liar" when it was on the public record that the had lied to the Republican members of the Senate.

Then, the leadership of the RNC is incompetent, beginning with the Chairman, Priebus!!!
Because he prevented the delegates at the Republican Covention from voting on the motion to free the delegates from their pledge to vote at the convention for the man whose name was on the ballot in the primaries.