MORE STIMULUS, ANYONE? Should Washington order another hefty round of Keynesian deficit spending in order to spur the limping US economy?

Peter Diamond, a 2010 recipient of the Nobel Prize for Economics, argues in favor of "pursuing valuable expenditures now," by subsidizing state and local government payrolls and pouring money into "a vast amount" of construction projects. "Between the error of doing too little and doing too much," Diamond says, "doing too little seems to me to be the much greater risk." Joseph Stiglitz, another economics laureate, agrees: "We will see in the next two years the real cost of there not being a second round of stimulus," he told the Society of American Business Editors and Writers. "We will see the economy slow down at a very high economic cost."

So a big new stimulus package is the way to go?

Absolutely not, say many prominent economists.

"Please, no more government spending!" exclaims Vernon Smith, who won the Nobel Prize for Economics in 2002. Far from being the key to economic recovery, he insists, deficit "stimulus" will only make the economy worse. His skepticism echoes that of yet another winner of the economics Nobel, Gary Becker: "There is no serious evidence," Becker wrote in July, "that the $800 billion stimulus package passed over a year ago has had much stimulating effect on unemployment or GDP."

In short, there is no consensus. And if even the world's most esteemed economic theorists cannot decide whether a huge new spending bill would make the current crisis better or worse, guidance will have to come from somewhere else.

Perhaps that somewhere is Europe, where governments have deliberately rejected Washington's embrace of massive deficit spending as the best way to rev up an ailing economy -- with better outcomes than Americans have seen.

Britain was the birthplace of John Maynard Keynes, but the British government is pursuing precisely the opposite of a Keynesian approach to fiscal policy. Rather than trying to boost demand and create more jobs through extravagant increases in spending and debt, London is practicing austerity. The coalition government headed by Prime Minister David Cameron is sharply cutting public spending, pruning back everything from welfare benefits to the military. Even the sums allocated to maintain the Queen's household will be shrunk. About 8 percent of Britain's roughly 6 million public-sector jobs, or 490,000, will be eliminated.

"We have taken our country back from the brink of bankruptcy," George Osborne, the chancellor of the Exchequer, told the House of Commons. "There is nothing fair about running huge budget deficits and burdening future generations with the debts we ourselves are not prepared to pay."

Britain is not an outlier. Across Europe, The New York Times reports, "governments from Germany to Greece are slashing public outlays. . . . The debate in Europe is more on how fast to cut government spending rather than whether such reductions are the right thing to do. . . . In Europe there is hardly a policymaker to be found who is making the argument that governments need to spend more, not less."

Results so far? Economic growth in the United States has been weaker, and the loss of jobs steeper, than in the 16-country euro zone. Especially striking is the contrast with Germany, which resisted heavy US pressure to undertake substantial new deficit spending. While the US economy has been growing at an anemic annual rate of barely 2 percent in recent month, Germany's economy is currently soaring at a 9 percent annual rate. Unemployment in Germany has fallen to 7.5 percent, the lowest it has been in 18 years. Here, it has scarcely fallen at all. What does Berlin understand that Washington doesn't? 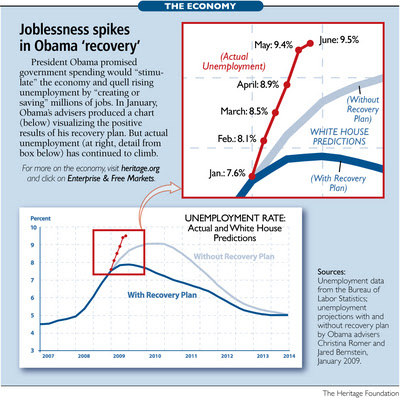 "Governments should not become addicted to borrowing as a quick fix to stimulate demand," the German finance minister, Wolfgang Schäuble, said in June, in response to the Obama administration's criticism of Germany's austerity measures. "Deficit spending cannot become a permanent state of affairs." President Obama, on the other hand, speaks blithely of "trillion-dollar deficits for years to come."

You can find economists to back up any point of view. Some will even tell you that the best way out of a hole brought on by too much debt is to dig even deeper into debt. The feeble US recovery suggests that the real world doesn't agree with those economists. Yesterday's election suggests that the voters don't, either.