LOOK OUT WHEN PORCINE COMMENTATORS START CALLING FOR CIVIL WAR 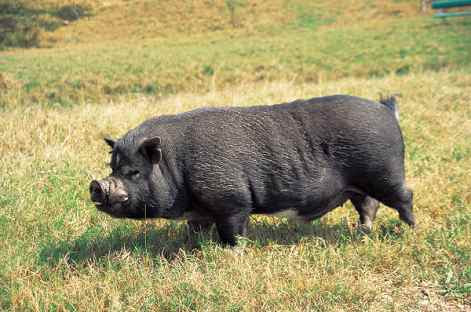 Could Michael Moore be on to something?

"This is war," Michael Moore declared last night on MSNBC's "Rachel Maddow Show." The porcine propagandist referred to the Wisconsin Senate's 18-1 vote earlier in the evening in favor of legislation, supported by Gov. Scott Walker, that would strip politicians of the power to reward government employee unions for their political support by committing taxpayer money to their members' extravagant pensions and other fringe benefits.

The near-unanimity of the vote belied the controversy over the legislation. The Wisconsin Senate has 33 members: 19 Republicans and 14 Democrats. Only Republicans participated in yesterday's vote. The Democrats--beneficiaries of the scheme through which government employee unions funnel taxpayer money to political campaigns--had fled the state for Illinois. Their absence denied the GOP the three-fifths quorum required under the Wisconsin Constitution to pass a budget. After a weeks-long stalemate, the Senate enacted the ban on so-called collective bargaining as a stand-alone bill, requiring the presence of only a simple majority of 17 senators.

RealClearPolitics has video and a summary of the Moore appearance:

Moore also calls for a "student walk-out" across the nation on Friday in response to the Wisconsin vote.

"This has to continue day after day and these governors have to step down," Moore declared.

"The rich have committed these crimes and the people will demand your ass is in jail," Michael Moore said with a pair of handcuffs on the set of Maddow's show.

Moore also shocked the audience by telling the rich and bankers that "we have a right to your money!"

This is all quite ridiculous, but the idea of a "student walkout" is especially comical. To some extent, that is what the mob scenes in Wisconsin in recent weeks have been. Madison, after all, is a big college town, with a unionized faculty, as well as a state capital. But unlike a college president, Gov. Walker, who received just 31% of the vote in the county that includes Madison, is in no way beholden to campus politics. The same is true of most other governors, particularly Republican ones.

And yet it is just possible that Moore is on to something. One can imagine a situation in which attacks on the legislative process by government employee unions and Democrats escalate into something resembling civil war. We do not suggest that this is a likely outcome, merely a worst-case scenario--but one that is worth thinking about.

The key is the group of government employees on whom we depend to maintain the public order necessary for a republic to function: the police. Many cops are unionized, and although the Wisconsin bill exempts them from the ban on so-called collective bargaining, there are signs, as blogger and legal scholar William Jacobson notes, that some cops have been "taking sides in this political dispute"--and worse, that these guardians of public order are siding with those using lawless tactics to disrupt the legislative process.

In a Feb. 27 post, Jacobson linked to a video of a cop--"presumably off-duty but wearing what looks like a police-issue sweater with insignia" and, on the back, the words COPS FOR LABOR in big letters--"who addressed the crowd of protesters inside the Wisconsin Capitol building on February 24, and threatened disobedience to state government":

Here is the transcription by a supporter of the police protest of the key passage:

In today's post, Jacobson quotes from a Milwaukee Journal Sentinel report: "It was clear Wednesday night, after thousands descended on the Capitol in reaction to the Senate vote . . ., that police were not going to try to stop protesters from entering what was supposed to be a building closed for the night."

In a later update, citing a blog called "Badger 14" (the title a derisive reference to the AWOL Democratic senators), Jacobson adds: "The State Police did make an initial effort to keep protesters out last night. But, once most protesters had left the building, several dozen protesters were allowed to sleep in [the] antechamber of the Assembly overnight, rather than being removed per court order." 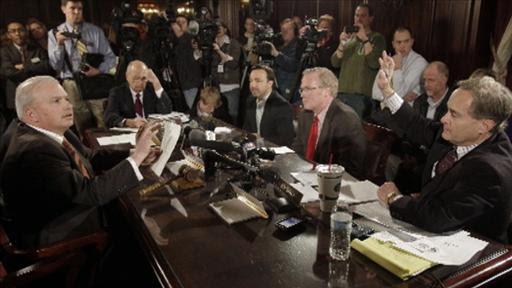 Columnist John Fund on what comes next in the Badger State.

Milwaukee's WTMJ-AM also reports that "the State Department of Justice confirms that it is investigating several death threats against a number of lawmakers." The station quotes an email sent to Republican senators last night that began: "Please put your things in order because you will be killed and your familes [sic] will also be killed due to your actions in the last 8 weeks."

Blogress Ann Althouse, herself a Wisconsin government employee, reports that the Capitol "protesters" entered through the window of a Democratic representative's office. She relays an on-scene report from her husband, Laurence Meade, on their efforts this morning to disrupt the legislature:

From Meade: Legislators can get into the building, but Republicans are being blocked from getting to their offices and into the Assembly chamber. It's the Assembly that needs to vote on the bill that the Senate passed last night, leading to the renewed protests. Meade heard from a source that Democratic legislators unlocked at least one door that leads to the doors for a cluster of Republican legislative offices. That would appear to be part of a scheme to prevent the vote.

"This is what democracy looks like"--that's the chant we've heard for 3 weeks. How do you like this new democracy, that has a mob storming the Capitol and, with the aid of the minority party, blocking the access of the majority party into their offices and into the legislative chamber? It looks more like anarchy to me.

Where are the police in all this? We do not know. Possibly the sheer size of the mob is making it difficult to restore order. Possibly they are acting in accord with their orders in adopting a relatively nonconfrontational approach, on the theory that it is wise to avoid heavy-handed tactics that might provoke the mob to violence.

But the threat of disobedience issued by that COP FOR LABOR raises a much more troubling possibility: that the police are aiding a political movement that is breaking the law in order to disrupt the legislative process. If that is the case, then what is going on in Madison is not so much anarchy as an attempted coup d'état--a challenge to Wisconsin's republican form of government by those who have been entrusted to safeguard it.

Nothing is more fundamental to the American system than republican government--in contemporary usage, please note, that's a small "r." As the New York Sun noted in a recent editorial, the U.S. Constitution provides that "the United States shall guarantee to every State in this Union a Republican Form of Government."

This provision, known as the Guarantee Clause, not only confers on the federal government the power to ensure republican government in the states, but imposes an affirmative obligation to do so. The Sun editorial continues:

It is hard to recall many moments that more directly echo the concerns of the founders than the situation America faces today, with a mobs [sic] of protesters, some bused in from out of state by labor unions bent on protecting their financial interests, occupying the state house at Madison and the governor there under heavy guard. Democratic legislators of Indiana are also reported to be fleeing to neighboring states to preclude a quorum being convened at Indianapolis, where the legislature is also considering a bill that would curb union power. At Ohio, a mob was gathering in the capitol in an effort to block efforts of the legislature to protect taxpayers from the public service unions.

To this list add Michigan, where on Tuesday, according to the Detroit News, legislation to limit union power "drew more than 1,000 protesters to the Capitol, and many swarmed into the rotunda chanting 'Kill the bill' and distracting the Senate during its regular session."

"No doubt it will be said that America is nowhere near having to engage the guarantee clause," the Sun editorial notes. "Republican government isn't yet gone, or even nearly gone, from Wisconsin, Ohio, and Indiana." We agree--though the Althouse-Meade reports suggest it came a bit nearer this morning than it was on Feb. 23, when the editorial appeared.

"But there is no doubt that it is being tested," the Sun continues, "and it is not so hard to imagine it breaking down":

What is so startling about the current crisis is that the chief executive officer of the federal government, bound by oath to preserve, protect, and defend the Constitution, is a party to the scheme by which the very legislators who form the core of republican government in the states are fleeing to states controlled by the President's party--a circumstance the Founders clearly hoped to avoid by wording the consitutional [sic] oath the way they did.

Should it become necessary, Gov. Walker still has the option to call out the National Guard. And whether that happens or not, Madison may prove to be the government unionists' Waterloo. Without an elite university campus nearby, it's hard to imagine they can drum up similar-size mobs in Indianapolis, Columbus, Lansing or most other state capitals.

But if they do figure a way to do so--and particularly if COPS FOR LABOR lend their muscle to the movement--President Obama could find himself obligated to put down a genuine insurrection by his own political supporters.

Last year former Los Angeles Mayor Richard Riordan predicted that the city would go bankrupt by 2015 because of its pension costs. He may not be too far off.

Los Angeles faces a $360 million deficit this year, which is about 10% of its general fund budget and doesn't look so bad at first glance. But here's the kicker: The city's police and firefighters consume 70% of the city's general fund, and their pensions alone make up one-fifth. Pension and retiree health-care costs for the city's workers are expected to soar to about $2.2 billion in 2015 from $1.4 billion today. To cover the additional costs, the city would have to eliminate everything from the zoo ($17 million) to the bureau of sanitation ($213 million) to the information technology agency ($80 million).

In order to prevent the city from going bankrupt on his watch, Democratic Mayor Antonio Villaraigosa has proposed reducing pensions for new employees and asking workers to contribute 2% of their salaries to their retiree health care. For every 1,000 new workers hired, these changes could shave $400 million off of the city's annual pension and retiree health-care bills. But unfortunately, it could take decades for the city to realize those savings since it can't afford to hire many workers right now.

How did things get so bad? In 2001 city taxpayers approved a ballot measure that dramatically increased pensions for its public safety officers. It allowed personnel to retire after 33 years with pensions equal to 90% of their final salary. Amazingly, unions and city officials told voters at the time that it would save the city $196 million in its first five years and "after that, additional cost savings are expected to continue for another five to ten years." Pension and retiree health-care costs have since increased five-fold. Other cost drivers have been longer life spans, health-care premium increases and an early-retirement program that the city approved a couple of years ago to avoid having to lay off employees.

Barring a significant restructuring of its pensions and benefits, the city of angels could become paradise lost.