NEWT IS NOT OUT, NOT BY A LONG SHOT

Why Gingrich Could Win

Herman Cain's prospects were good until this week brought accusatory testimony from a woman who showed up in person, with detail.

Newt Gingrich's rise in the polls—from near zero to the third slot in several polls—should come as no surprise to people who have been watching the Republican debates, now drawing television viewers as never before. The former speaker has stood out at these forums, the debater whose audiences seem to hang on his words and on a flow of thought rich in substance, a world apart from the usual that the political season brings.

"Substance" is too cold a word, perhaps, for the intense feeling that candidate Gingrich delivers so coolly in debates. Too cold too, no doubt, to describe the reactions of his listeners, visible on the faces of the crowds attending these forums—in their expressions, caught on C-SPAN's cameras, in the speed with which their desultory politeness disappears once a Gingrich talk begins. Their disengagement—the tendency to look around the room, chat with their neighbors—vanishes. The room is on high alert.

The Gingrich effect showed dramatically at the Iowa Faith & Freedom Coalition forum last month—an occasion for which most of the candidates had, not surprisingly, prepared addresses focused on the importance of religion in their lives. Michele Bachmann told how, after struggle and indecision, she had found her way to God. So did Rick Perry. Rick Santorum provided a lengthy narrative on his personal commitment to the battle against partial-birth abortion—a history evidently from which no detail had been omitted. Ron Paul offered quotes from the Old and New Testaments where, it seems, he located support for his views on the dollar. 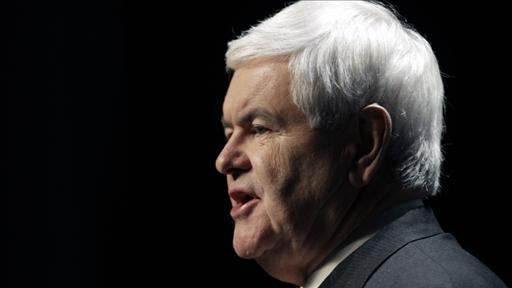 There were two exceptions to the lineup of speeches embracing religious themes. One was Herman Cain, who concentrated on the meaning of American freedom and admonished the crowd to stay informed, "because stupid people are running America." The other was Mr. Gingrich. No one else's remarks would ignite the huge response his talk did.

He began with the declaration that Americans were confronting the most important election choice since 1860. America would have the chance in 2012, Mr. Gingrich said, to repudiate decisively decades of leftward drift in our universities and colleges, our newsrooms, our judicial system and bureaucracies.

He would go on to detail the key policies he would put in place if elected, something other Republican candidates have done regularly to little effect. The Gingrich list was interrupted by thunderous applause at every turn. The difference was, as always, in the details—in the informed, scathing descriptions of the Obama policies to be dispatched and replaced, the convincing tone that suggested such a transformation was likely—even imminent.

Mr. Gingrich predicted, too, that late on Election Night—after it was clear that President Obama had been defeated along with the Democrats in the Senate—the recovery would begin, at once. His audience roared with pleasure. No other Republican candidate could have made the promise so persuasive.

Finally, Mr. Gingrich announced that as the Republican nominee he would challenge President Obama to seven Lincoln-Douglas-style debates. "I think I can represent American exceptionalism, free enterprise, the rights of private property and the Constitution, better than he can represent class warfare, bureaucratic socialism, weakness in foreign policy, and total confusion in the economy."
When it came time to answer questions from a panel of journalists, he was asked first about energy, one of those vital subjects that don't tend to yield lively commentary. How would Mr. Gingrich's policies differ from those of the current administration?

Mr. Gingrich launched into a lethal thumbnail description of the Obama administration's energy policy. The president, he said, had gone to Brazil and told the Brazilians he was really glad they were drilling offshore and that he would like America to be their best customer. "The job of the American president," Mr. Gingrich told the panel, "is not to be a purchasing agent for a foreign country—it's to be a salesman for the United States of America." 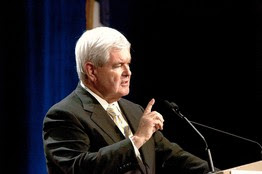 The former speaker of the House is a dab hand at drawing listeners in, for good reason—he showers them with details, facts and history in a degree no candidate in recent memory has even approached.


Audiences have a way of rewarding such trust.

No one listening that night to candidate Gingrich's reflections on the menace of radical judges from Lincoln's time on down could have ignored the power of his fiery assessment—including the Dred Scott decision, others by courts today that threaten our national security, and much in between.
The Iowa contest ahead is all important for Mr. Gingrich. The same is truer still for Michele Bachmann and Rick Santorum. Ms. Bachmann has been looking increasingly aware that her hopes are fading. Mr. Santorum now seems to inhabit a world so nearly exclusive in its focus on family and family values that it's hard to imagine him a successful contender for the presidency of a large and varied nation of Americans with other concerns, the non-family kind included.
Then there's Congressman Ron Paul, who last weekend let it be known that if he doesn't like the views of the person who wins the nomination, he won't support the Republican candidate. This is a good reason—one of many—for Mr. Paul to retire himself from further debates. It's a certainty, to put it mildly, that he's not going to be the nominee.

It would be passing strange to have as a candidate for the presidency of the United States an envenomed crank who regularly offers justification for the 9/11 attacks that resulted in the annihilation of 3,000 Americans. It was an act, Mr. Paul explains in these exculpatory sermonettes, to which the terrorists were driven by American policies. Mr. Paul may get all the fond buddy treatment in the world from his fellow debaters, but few Americans outside of his devoted army of isolationist fanatics will forget these views.

That leaves Mitt Romney, and Messrs. Perry, Cain and Gingrich heading the list of competitors for Iowa. Mr. Cain's prospects were good until this week brought accusatory testimony from another woman—one who showed up in person, with plenty of detail. Charges of lies, financial motives and conspiracies notwithstanding, it's hard to see how Mr. Cain weathers this disaster. No outsider can know what actually did or did not happen. But all the snorting in the world about Gloria Allred, the accuser's attorney, isn't going to change the impact of this highly specific accusation.

Whoever his competitors are in Iowa and beyond, Mr. Gingrich faces a hard fight for the nomination. His greatest asset lies in his capacity to speak to Americans as he has done, with such potency, during the Republican debates. No candidate in the field comes close to his talent for connection. There's no underestimating the importance of such a power in the presidential election ahead, or any other one.
His rise in the polls suggests that more and more Republicans are absorbing that fact, along with the possibility that Mr. Gingrich's qualifications all 'round could well make him the most formidable contender for the contest with Barack Obama.

Ms. Rabinowitz is a member of the Journal's editorial board.