IT'S A MIGHTY NICE DEAL IF YOU AN GET IT

Be the first of your friends to like this.
A YEAR AGO THIS WEEK, just two days before being shot by a deranged assailant in her district, Arizona Representative Gabrielle Giffords introduced legislation to cut congressional salaries by 5 percent, from $174,000 to $165,300.
Needless to say, the bill didn't become law -- the last time the House and Senate actually trimmed their members' pay was during the Great Depression. Yet there are few things Congress could do that would be more certain to win public esteem. In a national poll commissioned last month by The Hill, a Washington newspaper, 67 percent of voters said lawmakers should be paid less. With Congress's approval rating barely above single digits, and with so many Americans feeling the sting of a weak economy, you might think support for a modest one-time pay cut would be a no brainer -- especially since congressional pay has been hiked 10 times since 1998. 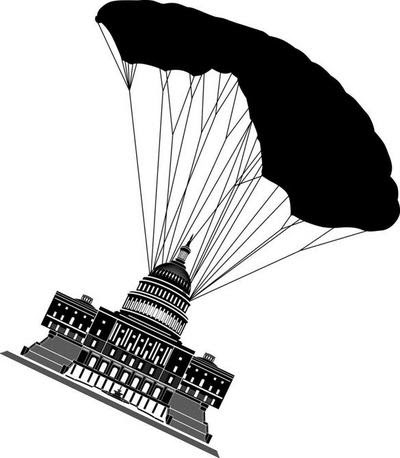 Yet legislation to curb Congress's outlandish pay and perks rarely gets far on Capitol Hill. The relatively few members willing to make noise about the issue are not rewarded with the love of their colleagues. Former Senator Russ Feingold of Wisconsin once told me he got "the coldest stares" whenever he introduced legislation to block congressional pay hikes from kicking in automatically. Sometimes his colleagues would try to change his mind, Feingold said. "They tell me about their kids' tuition. Or they say, 'Don't you think you're worth more money?'" He would respond that if they thought they deserved an increase, they should be willing to openly vote for one.
Feingold left Congress last year, but other lawmakers have taken up the cause. Representative Mike Coffman of Colorado -- who is as conservative a Republican as Feingold was a liberal Democrat -- last month introduced a bill that would ban "stealth" pay hikes by preventing any congressional pay raise from taking effect unless members of Congress first cast a recorded vote. Another Coffman bill would cut congressional salaries by 10 percent.
Coffman's top priority for reforming Congress, however, is H.R.2913, which would end the gold-plated congressional pension plan enjoyed by members of Congress. Of all the ways in which members of Congress reward themselves, none is as lucrative as their defined-benefit pensions, a perk more lavish than anything most private-sector workers will ever see.
Under the current system, senators and representatives can collect an annual pension worth 1.7 percent of their present salary for every year they serve in Congress up to 20 years, plus an additional 1 percent for each year beyond that. With congressional pay now at $174,000, a member of Congress who retires after just six years can thus look forward to receiving more than $17,700 a year for life beginning at age 62. (That doesn't include the generous cost-of-living adjustments -- another benefit unavailable to most private-sector retirees.) A 20-year congressional veteran would collect more than $59,000 a year -- and the payments begin at age 50. For members elected before 1984, there is an even more generous setup.
And how much of their salary do incumbent senators and representatives contribute to this sumptuous pension plan? A puny 1.3 percent. (They also participate in Social Security, and are eligible for a 401(k)-style plan, neither of which would be affected by Coffman's bill.)
It's a mighty nice deal if you can get it -- between twice and three times as munificent as pensions offered to similarly-salaried workers in the corporate world, according to the National Taxpayers Union. For the most part, mere mortals like us -- who are, of course, paying for Congress's lifestyle with our taxes -- can only gape from the sidelines.
A veteran of both the Army and the Marine Corps, Coffman says his military training instilled in him a fundamental leadership principle: Never order someone else to do something you would not be prepared to do yourself. "For us to navigate out of this economic crisis that we're in," he told me yesterday, "we're going to have to make tough decisions that will affect other people's pay and benefits. To say that Congress is somehow immune to sacrifice is just wrong."
So far Coffman has rounded up 15 cosponsors for his pension bill, with new ones joining at about one per week. He expected to have more backing from colleagues who ran as fiscal conservatives, but he is confident that public pressure will bring them around.
Congress must set an example, he says, and ending its rich pensions is the way to set it. "Either incumbents sign on, or they're going to be giving their opponents some serious leverage."
(Jeff Jacoby is a columnist for The Boston Globe. His website is www.JeffJacoby.com).
-- ## --
Posted by Leo Rugiens at 12:19 PM