A 'referendum' on Romney

Be the first of your friends to like this. 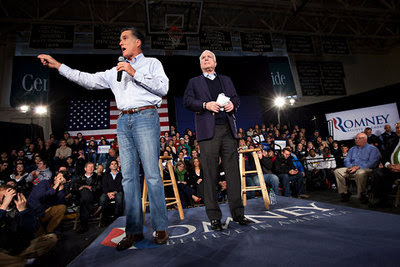 SALEM, N.H. -- Mitt Romney has been thought for months to have the New Hampshire primary in the bag. But one vote he didn't have locked up until Wednesday was that of Steve Rowe, a Vietnam-era veteran who spent much of the 1970s aboard the USS Saratoga, a US Navy supercarrier. Like a lot of New Hampshire residents, Rowe headed into the final week before the presidential primary still unsure whom to support. It was only the endorsement of another Navy vet -- US Senator John McCain, the GOP's 2008 presidential nominee -- that moved Rowe into the Romney camp.
Rowe showed up early Thursday morning, camera in hand, for a Romney town hall meeting at the Boys and Girls Club here. It wasn't the former Massachusetts governor he wanted a picture of, but the former war hero. "Now that McCain's behind Romney, he'll pull a lot of votes from people like me," Rowe predicted.
That, of course, is what Romney and his staff are hoping. McCain has long been a favorite of New Hampshire Republicans and independents: He crushed George W. Bush in the state's 2000 primary and beat Romney in 2008. And thanks to his brave record as a prisoner of war in Hanoi, McCain -- though a frequent thorn in the GOP's right side -- has retained lasting respect even in his party's more conservative circles. (Which explains why, after endorsing Romney in New Hampshire, McCain flew with him to campaign in South Carolina.)
But there are limits to McCain's influence, even among Republican voters who served in Vietnam.
John Anderson, a nuclear engineer from Pittsburg, NH, was the first on his feet with a question for Newt Gingrich when the former speaker visited Littleton, a town in the White Mountains near New Hampshire's border with Vermont. Gingrich had repeated his description of Romney as a "legitimate Massachusetts moderate," ticking off the issues -- from gun control to health care to judicial appointments -- on which Romney had disappointed conservatives during his term as governor.
"You call him a moderate, and that's being generous," boomed Anderson, a retired Air Force officer who was involved in Operation Ranch Hand against the Viet Cong in 1965. "And as a Vietnam vet, I was pretty upset with a certain person that endorsed him the other day."
Anderson told me afterward that while he deeply admires McCain, he has no intention of voting for Romney, whom he considers too willing to tilt to the left whenever it is politically expedient to do so. "I'm not a Romney-hater," he said. But given Romney's philosophical flexibility, "I do not believe he can take on President Obama."
Every presidential re-election campaign eventually becomes a referendum on the incumbent. No matter who the GOP eventually nominates, voters next November will be deciding whether Barack Obama deserves a second term in office. But the Republican nomination contest has itself become a kind of referendum -- a referendum on Romney. In the "Mitt" camp are those who see in the former consultant and venture capitalist and pragmatic politician the skill set needed to defeat Obama and revive the economy. In the "not-Mitt" camp are those who find it impossible to rally behind a candidate who seems to lack clear and resonant principles. 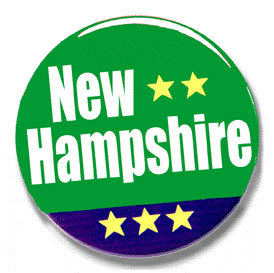 At the Iowa caucuses, entrance polls showed, Romney handily won the support of voters who cited electability as the most important criterion, while the great majority of those looking for a principled conservative voted against him.
"I'm willing to be another Ronald Reagan if that's what you want me to be," then-Senator Bob Dole unconvincingly promised Republicans in 1995. Dole went on to win the GOP nomination the following year, but the party's conservative core never got enthusiastic about him, and independent voters weren't attracted to a candidate who couldn't even excite his own base.
The case against Romney boils down to the perception that to become president, he is prepared to say anything. The case for him boils down to the conviction that virtually any Republican, even a political weathervane, would be better than Obama. "We cannot afford another four years of this man," a voter in the audience said to Romney at the Boys and Girls Club Thursday morning. "We've got to get him out of the White House."
Before Republicans can take on Obama, they've got to figure out what sort of leader they want to replace him with. "Mitt" may have New Hampshire's primary in the bag, but "not-Mitt" still seems pretty formidable.
(Jeff Jacoby is a columnist for The Boston Globe. His website is www.JeffJacoby.com).
-- ## --