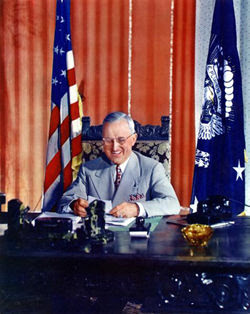 President Harry Truman at his desk in the Oval This is nothing short of disastrous
for President Obama.

After dodging responsibility for the Benghazi attack for over a month, pointing fingers at everything from the State Department to the intelligence community, theWhite House is outclassedby…HillaryClinton.


By taking the blame now, Hillary effectively 1.) Undermined Obama’s leadership, 2.) Put pressure on him right before a major debate to take the heat:

Secretary of State Hillary Clinton on Monday tried to douse a political firestorm around the deadly assault on a U.S. diplomatic mission in Libya, saying she is responsible for the security of American diplomatic outposts.


“I take responsibility” for the protection of U.S. diplomats Clinton said during a visit to Peru. But she said an investigation now under way will ultimately determine what happened in the attack that left four Americans dead. …

Clinton said President Barack Obama and Vice President Joe Biden are not involved in security decisions.
“I want to avoid some kind of political gotcha,” she added, noting that it is close to the election.


This puts Obama in an incredibly uncomfortable position.


If he let’s an underling like Hillary accept responsibility, he’s going to look even weaker than he has over the past few weeks. But even if Obama does step up and take the blame for the Benghazi attack today, it might be too late. Not only will it look like he did it under political pressure, but Hillary falling on her sword just highlights the politically-craven blame-game the White House has been playing for the past month.
Topics: Barack Obama, Hillary Clinton, Libya consulate attack, State Department