THERE ARE LITTLE LIES, THERE ARE BIG LIES, AND THEN THERE ARE DAMN LIES

Obama's ring: 'There is no god but Allah'

by Jerome R. CorsiEmail | Archive
Jerome R. Corsi, a Harvard Ph.D., is a WND senior staff reporter. He has authored many books, including No. 1 N.Y. Times best-sellers "The Obama Nation" and "Unfit for Command." Corsi's latest book is "Where's the REAL Birth Certificate?"More ↓
inS 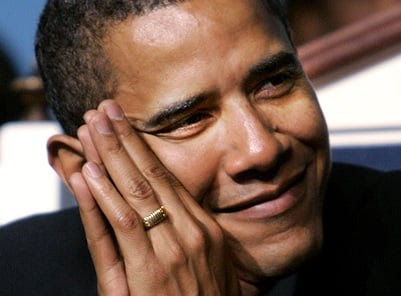 Barack Obama's gold band
NEW YORK – As a student at Harvard Law School, then-bachelor Barack Obama’s practice of wearing a gold band on his wedding-ring finger puzzled his colleagues.
Now, newly published photographs of Obama from the 1980s show that the ring Obama wore on his wedding-ring finger as an unmarried student is the same ring Michelle Robinson put on his finger at the couple’s wedding ceremony in 1992.
Moreover, according to Arabic-language and Islamic experts, the ring Obama has been wearing for more than 30 years is adorned with the first part of the Islamic declaration of faith, the Shahada: “There is no god except Allah.”

Inscription on Obama's ring
The Shahada is the first of the Five Pillars of Islam, expressing the two fundamental beliefs that make a person a Muslim: There is no god but Allah, and Muhammad is Allah’s prophet.
Sincere recitation of the Shahada is the sole requirement for becoming a Muslim, as it expresses a person’s rejection of all other gods.
Egyptian-born Islamic scholar Mark A. Gabriel, Ph.D., examined photographs of Obama’s ring at WND’s request and concluded that the first half of the Shahada is inscribed on it.
“There can be no doubt that someone wearing the inscription ‘There is no god except Allah’ has a very close connection to Islamic beliefs, the Islamic religion and Islamic society to which this statement is so strongly attached,” Gabriel told WND.
Jerome Corsi’s “Where’s the REAL Birth Certificate?” carefully documents the story the establishment media still refuses to tell
“Dreams from My Real Father” producer Joel Gilbert, an Arabic speaker and an expert on the Middle East, was the first to conclude that Obama’s ring, reportedly from Indonesia, bore an Islamic inscription.
Photographs published last week by the New Yorker from Obama’s time at Occidental College, taken by fellows students, indicate that the ring Obama wore three decades ago is the one he is wearing in the White House. 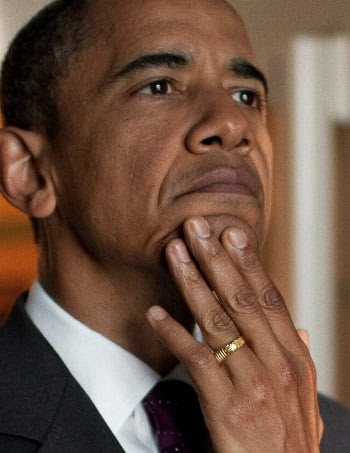 Barack Obama
As WND reported in July, previously published photos have shown Obama wearing a gold band on his wedding-ring finger continuously from 1981 at Occidental, through graduation at Columbia in 1983, in a visit to Africa in 1988 and during his time at Harvard from 1988 to 1991. But none, until now, have displayed the ring with enough detail to identify it as the one he currently is wearing.
WND reported a satirical edition of the Harvard Law Review published by students in 1990 contains a mock Dewers Scotch profile advertisement poking fun at Obama. Among a list of Obama’s “Latest Accomplishments” is: “Deflecting Persistent Questioning About Ring On Left Hand.”
The comment suggests the ring was a subject of student curiosity at the time and that Obama was not forthcoming with an explanation.
He still has not explained why he wore the band on his wedding-ring finger before he married Michelle. 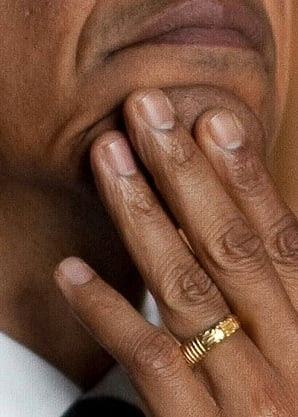 Declaration
Gabriel, born to Muslim parents in Upper Egypt, grew up immersed in Islamic culture. He memorized the Quran at age of 12 and graduated in 1990 with a Masters degree from the prestigious Al-Azhar University in Cairo, the pre-eminent Sunni Muslim institution of learning.
He explained that on Obama’s ring, the declaration “There is no god except Allah” (La Ilaha Illallah) is inscribed in two sections, one above the other.
On the upper section, “There is no god” is written in Arabic letters, from right to left: Lam, Alif, Alif, Lam, Ha.
On the lower section is “except god,” written in Arabic letters from right to left: Alif, Lam, Alif, Alif, Lam, Lam, Ha.
In the lower section, the word “Allah” is written partially on top of the word “except,” noted Gabriel, the author of “Islam and Terrorism” and “Journey Inside the Mind of an Islamic Terrorist.”
It is common in Islamic art and Arabic calligraphy, especially when expressing Quranic messages on jewelry, to artfully place letters on top of each other to fit them into the allotted space.
The exhibit below shows how the Arabic inscription fits over the two parts of the Obama ring. 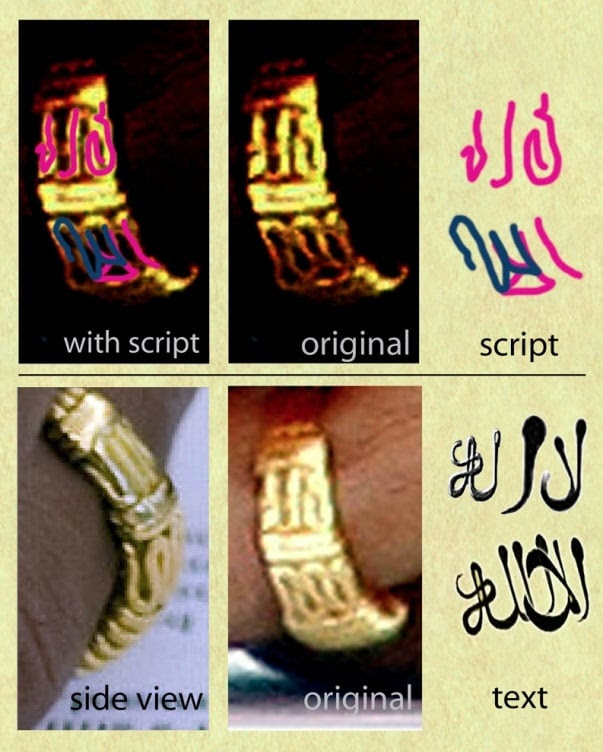 “There is no God except Allah” overlaid on Obama ring
‘First-rate accent’
In an interview during the 2008 presidential campaign, New York Times columnist Nicholas Kristof questioned Obama about his Islamic education in Indonesia, where he lived from 1967 to 1971.
After acknowledging that he once got in trouble for making faces during Quran study classes in his elementary school, Obama recited for Kristoff the opening lines of the Arabic call to prayer, the Adhan.
The prayer incorporates the Shahada, the expression of Islamic faith, with each line repeated twice:

Kristof noted Obama recited the prayer in Arabic “with a first-rate accent.”
“In a remark that seemed delightfully uncalculated (it’ll give Alabama voters heart attacks), Mr. Obama described the call to prayer as ‘one of the prettiest sounds on Earth at sunset,’” Kristoff wrote.
Gabriel told WND that a person wearing a ring with “There is no god except Allah” demonstrates the significance of Islam in his life.
“Christians never use the statement,” he pointed out. “By wearing the Shahada on jewelry, a person communicates that Allah is in control of all circumstances. Allah controls you; Allah is the one and only one.”
Obama, who attended Rev. Jeremiah Wright’s Trinity United Church of Christ in Chicago for two decades, has repeatedly insisted he is a Christian. 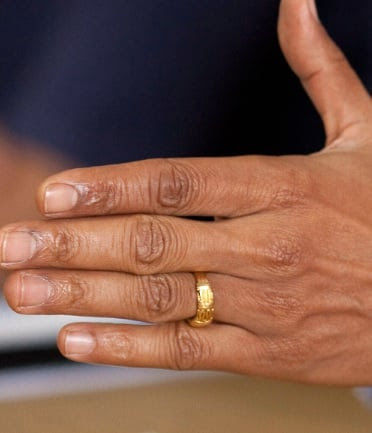 Obama's hand in a White House photo
‘Blessed statement in Islam’
Gabriel emphasized the importance of the Shahada in the profession of faith in Islam.
“Muslims recite the Shahada when they wake up in the morning and before they go to sleep at night,” he said. “It is repeated five times every day in the call to prayer in every mosque. A single honest recitation of the Shahada in Arabic is all that is required for a person to convert to Islam.”
Gabriel believes it would be impossible for Obama not to be aware of what is written on the ring, calling it a “blessed statement in Islam.”
“By wearing this religious statement on one’s hand, it connects the person to Islam,” he said. “It is worn in hopes that Allah’s protections would be with the person, in hopes of gaining favor with Allah.”
He affirmed that Muslim men do wear gold rings, despite prohibitions in Islamic law.
“Though Islamic law prohibits the wearing of gold jewelry by men, it is a widely accepted custom, even in strictly Muslim countries,” he said. “The wearing of gold rings is even more acceptable when it contains a religious message, such as ‘There is no god except Allah.’”
He noted there is also widespread acceptance of men wearing gold jewelry in non-Arab Islamic societies such as Indonesia, Bangladesh, Malaysia and Pakistan, where Muslims generally understand that Muslims are subject to strong influences of local non-Arab cultures.
“Therefore, even though technically prohibited, a Muslim man wearing a gold ring is not looked down upon, especially if the jewelry reflects a love of Islam and a connection to Islamic society,” he said. “An even greater level of acceptance is for businessmen who deal with infidels, because such a person would be regarded as a person of influence.”

Obama signing legislation (White House photo)
‘I have known Islam on three continents’
Filmmaker Joel Gilbert, an expert on Islamic history, noted Obama wore the ring during his high-profile speech in Cairo on June 4, 2009, in the first months of his presidency.
“Now we have a new context for what Obama meant when he told the Islamic audience in Cairo that he has ‘known Islam on three continents,” Gilbert said. “He also told the Cairo audience that he considered it part of his responsibility as president of the United States ‘to fight against negative stereotypes of Islam wherever they appear.’ All religious Muslims are by definition required to defend Islam.”
Gilbert’s most recent documentary films on the Middle East are “Farewell Israel: Bush, Iran and The Revolt of Islam” and “Atomic Jihad: Ahmadinejad’s Coming War and Obama’s Politics of Defeat” 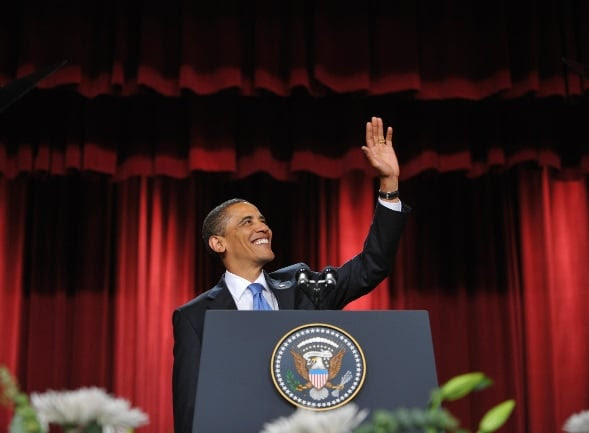 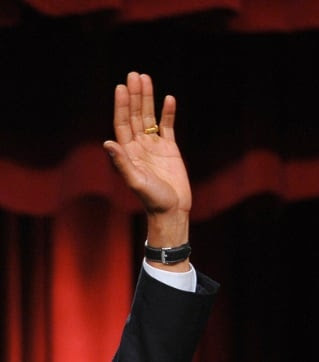 Obama in Cairo, Egypt, June 4, 2009, close-up
The Occidental ring
The photographs published last week by New Yorker magazine indicate Obama was wearing the ring at Occidental College.
One photo shows Obama sitting alongside Occidental roommate Hasan Chandoo in 1981, apparently waiting for a meal to be served. 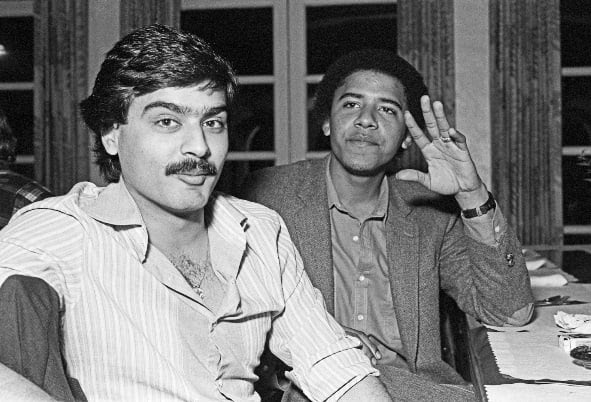 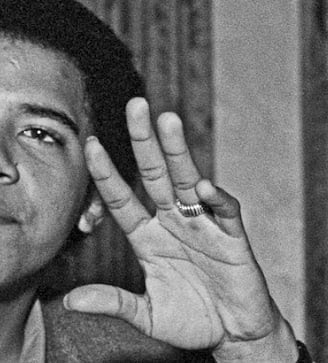 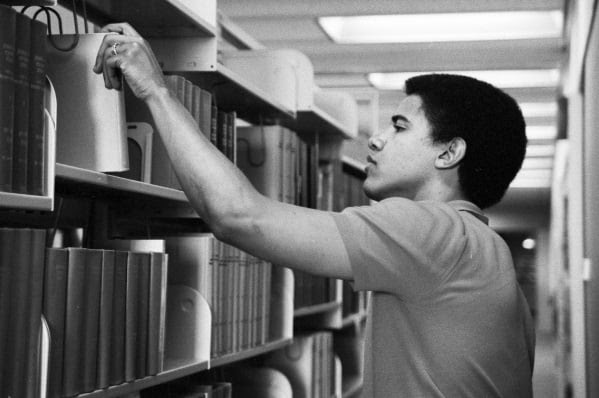 Barack Obama in Occidental College library in 1981 (Tom Grauman, New Yorker magazine)
A close-up of the library photo can be seen below. 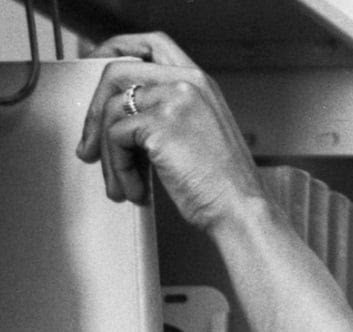 Detail of Barack Obama ring in Occidental College library in 1981 (Tom Grauman, New Yorker magazine)
In the above photo, the ring’s design can be seen, including a series of parallel bars that distinguish its outer circumference.
The Obama wedding ring
The ring was mentioned in a New York Times article in 2009 recounting the Obamas’ wedding.
In the story, Jodi Kantor described its “intricate gold design,” noting it came from Barack Obama’s boyhood home of Indonesia and was not traditional, like Michelle’s.
Kantor wrote:


Just before the Rev. Jeremiah A. Wright Jr. pronounced Barack Obama and Michelle Robinson man and wife on the evening of Oct. 3, 1992, he held their wedding rings – signifying their new, enduring bonds – before the guests at Trinity United Church of Christ. Michelle’s was traditional, but Barack’s was an intricate gold design from Indonesia, where he had lived as a boy.

There was no mention in the article that Obama already had been wearing the ring for more than a decade.
The photos of the ring from the 1980s can be compared with more recent photos, such as the ones published by the Huffington Post in 2010 in an article by Anya Strzemien, “Obama’s ‘Intricate’ Indonesian Wedding Band: A CLOSE-UP,” seen here. 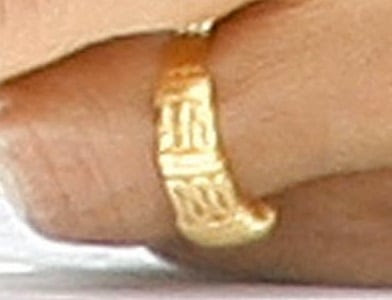 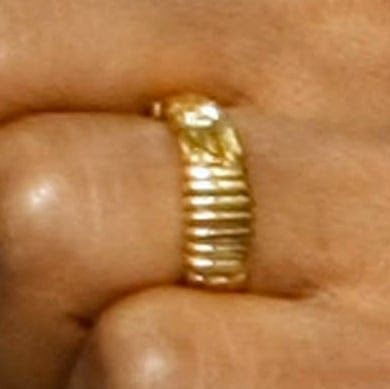