LINCOLN FIRED GENERALS FOR NOT ACTING; OBAMA FIRES GENERALS AND ADMIRALS FOR TRY TO RESCUE BENGAZI

Top US General and Admiral reported canned over Benghazi actions: both may have moved to rescue trapped troops 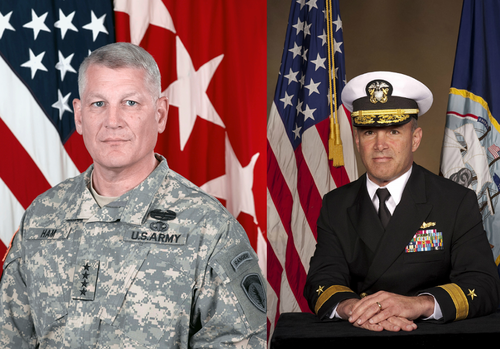 The Washington Times reports that on October 18, Defense Secretary Leon Panetta appeared unexpectedly at an otherwise unrelated briefing on “Efforts to Enhance the Financial Health of the Force." News organizations and CSPAN were told beforehand there was no news value to the event and gave it scant coverage. In his brief remarks Panetta said: "Today I am very pleased to announce that President Obama will nominate General David Rodriguez to succeed General Carter Ham as commander of U.S. Africa Command.”

This came as a surprise to many, since General Ham had only been in the position for a year and a half. The General is a very well regarded officer who made AFRICOM into a true Combatant Command after the ineffective leadership of his predecessor, General William E. "Kip" Ward. Later, word circulated informally that General Ham was scheduled to rotate out in March 2013 anyway, but according to Joint doctrine, "the tour length for combatant commanders and Defense agency directors is three years."

On Saturday, the U.S. Navy announced that it was replacing the admiral in command of the USS John C. Stennis, an aircraft carrier strike group in the Middle East pending the outcome of an internal investigation into undisclosed allegations of inappropriate judgment.

Rear Adm. Charles M. Gaouette is being sent back to the ' home port at Bremerton, Washington, in what the Navy called a temporary reassignment. The Navy said he is not formally relieved of his command of the Stennis strike group but will be replaced by Rear Adm. Troy M. Shoemaker, who will assume command until the investigation is completed. It is highly unusual for the Navy to replace a carrier strike group commander during its deployment. Rear Adm. John Kirby, the Navy's chief spokesman, declined to discuss the investigation.

There are persistent but unconfirmed reports that both men were replaced for making unauthorized orders to help the US security officials at the Benghazi consulate and annex.  The reports, from unnamed sources inside the military, are that General Ham, after receiving reports about the Benghazi attack, ordered a Rapid Response Force to prepare for deployment to the besieged Americans but was immediately relieved of his command and prevented from taking further rescue actions.

Reports from ABC News confirms that the allegations are recent and were made within the last couple of weeks. The Washington Post confirms that the Stennis was centrally involved in the Middle East.
Both Panetta and Chairman of the Joints Chiefs Martin Dempsey have denied that relieving Ham of his command was anything but a routine rotation, but the timing and numerous reports suggest otherwise.

I just signed the petition "Mr. Speaker of the House: Call Gen Carter Ham and Adm Charles Gaouette to testify to what happened in Benghazi on 9/11/12" on Change.org.

It's important. Will you sign it too? Here's the link: