OBAMA NEEDS EVERY BLACK VOTE, LESS CERTAIN IS WHETHER BLACKS NEED HIM 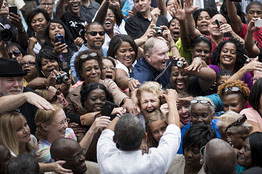 For Blacks, the Pyrrhic Victory of the Obama Era

Minorities do better to focus on economic gains, not political success.

There has been much dispute in recent weeks about the accuracy of the presidential polls, but you don't need a political scientist to tell you that Barack Obama can count on strong black support come Nov. 6.


Four years ago, 95% of black voters went for Mr. Obama, and he is likely to win something approaching that percentage in his re-election bid, notwithstanding economic data showing that blacks have lost ground on his watch. When the president assumed office, unemployment was 12.7% for blacks and 7.1% for whites. Today it is 14.3% for blacks and 7% for whites, which means that the black-white employment gap has not merely persisted under Mr. Obama but widened.


No matter. The president's approval rating among African-Americans is pushing 90%, and a Washington Post/ABC News tracking poll last week found that 97% of blacks plan to double down on him in this election. Racial pride surely plays some part in these attitudes, as does traditional black support of Democratic presidential candidates over the past four decades. But another factor is the abiding belief among civil-rights leaders that political activity is essential for black upward mobility.


Long after the passage of landmark civil-rights legislation, black leaders have continued to focus on integrating political institutions to redress social and economic problems. Demands for black access to the ballot have morphed into demands for "safe" black seats in Congress and "proportionate" representation among elected officials. Mr. Obama's victory in 2008 was the ultimate realization of this thinking. The Rev. C.T. Vivian, a close associate of Martin Luther King Jr., told Obama biographer David Remnick that King was a "prophet," and the "politician of our age, who comes along to follow that prophet, is Barack Obama. Martin laid the moral and spiritual base for the political reality to follow."

But the historical reality for other racial and ethnic groups in the U.S. is that political success has not been necessary for economic advancement. Germans were a third of the population in colonial Pennsylvania yet studiously avoided public office. Only after Germans had risen economically did they begin to distinguish themselves in politics. The impoverished Eastern European Jews who began arriving here in large numbers in the 1880s made little impact politically until well after they had established themselves economically.


Conversely, the Irish enjoyed tremendous political success in the latter part of the 19th century, yet they experienced a slower rise from poverty than Germans, Jews, Italians and other groups. "The Irish were fiercely loyal to each other," notes economist Thomas Sowell, who has spent decades tracing the history of racial and ethnic populations. "This had little effect on the average Irish-American, who began to reach economic prosperity in the 20th century at about the same time when the Irish political machines began to decline."


Today, Asian-Americans are the nation's best-educated and highest-earning racial group. According to a Pew study released earlier this year, 49% of Asians age 25 and older hold bachelor's degrees, compared with 31% of whites and 18% of blacks. The median household income for Asians is $66,000, which is $12,000 more than white households and double that of black households. As with other groups, political clout has not been a precondition of Asian socioeconomic advancement.


There are a handful of prominent Asian-American politicians today, including Govs. Bobby Jindal of Louisiana and Nikki Haley of South Carolina, but Asians have tended to avoid politics compared with other groups. Between 1990 and 2000, for example, the number of elected officials grew by 23% for blacks but only by 4% for Asians. In 2008, Asians were significantly less likely than both blacks and whites to have voted.


The election of Barack Obama four years ago gave blacks bragging rights, but bragging rights can't close the black-white achievement gap in education or increase black labor-force participation or reduce black incarceration rates. A civil-rights leadership that encourages blacks to look to politicians to solve these problems is doing a disservice to the people they claim to represent.


Asians, for their part, can point to an out-of-wedlock birthrate of just 16%, the lowest of any major group and a significant factor in Asian success. The black illegitimacy rate last year was 72%. Might it be that having a black man in the Oval Office is less important for black advancement than having one in the home?


The political scientists tell us that Mr. Obama will almost certainly need every black vote he can muster on Election Day. Less certain is whether blacks need him.

Mr. Riley is a member of the Journal's editorial board.

A version of this article appeared November 5, 2012, on page A15 in the U.S. edition of The Wall Street Journal, with the headline: For Blacks, the Pyrrhic Victory of the Obama Era.
Posted by Leo Rugiens at 7:30 AM