A 'right' to recline?

Be the first of your friends to like this.
YOU MAY not be 100 percent sure what you think about Vladimir Putin's maneuvers in Ukraine, Burger King's tax inversion, the indictment of Texas Governor Rick Perry, or Scotland's independence referendum. But you know exactly where you come down on the Great Airline Reclining Seat Controversy, don't you? 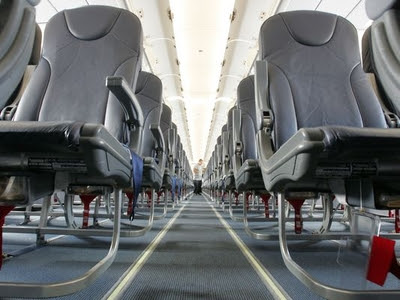 Everyone has an opinion on the passenger in Row 12 who caused an uproar on a United flight from Newark to Denver when he used a plastic bracket called the "Knee Defender" to block the woman in front of him from reclining her seat. When a flight attendant told the man to remove the gadget — which United, like most airlines, prohibits — he refused. The infuriated woman in Row 11, reported the Associated Press, "then stood up, turned around, and threw a cup of water at him." Whereupon the plane was diverted to Chicago, and the two passengers were ejected.
Three days later, another passenger was booted from another flight because of another struggle over legroom. American Airlines diverted a Miami-to-Paris flight to Boston, where Edmond Alexandre was arrested on charges of "interfering with a flight crew" after fighting when the seat in front him was reclined.
Small wonder these stories have struck a nerve. You don't have to be a frequent flyer to know how cramped air travel has become, or how maddening — not to mention kneecap- and laptop-endangering — it can be when the already minuscule space between you and the seat-back in front of you suddenly shrinks further because a passenger one row up leans back without warning. Nor is it hard to understand the frustration of a passenger with an aching back or a need to sleep who presses the recline button, only to discover that the seat has been deliberately immobilized by a fellow traveler.
But how did the battle between knee defenders and recliners turn into an all-or-nothing clash of rights?
"I own the right to recline, and if my reclining bothers you, you can pay me to stop," asserts economics reporter Josh Barro in The Upshot, a New York Times politics and policy website. "If sitting behind my reclined seat was such misery . . . someone would have opened his wallet and paid me by now."
Conversely, the Times's international business editor, Damon Darlin, is just as adamant in defense of his right — not his wish or preference, mind you, but his right — to attach a disabling clamp to the seat in front of him.
"The real problem is undefined property rights over the same four or five inches of space," Darlin maintains. "The person with the recliner button holds an advantage. The Knee Defender reallocates the rights."
Au contraire, argues the Financial Times in an editorial. An airplane ticket "is a contract that guarantees very few things, but the right to recline your seat at cruising altitude is one of them."
A plane ticket, of course, guarantees no such thing. Just as a concert ticket doesn't guarantee the right to view the stage unobstructed by a tall person right in front of you. Just as a hotel room reservation doesn't guarantee the right not to be disturbed by sounds from guests in the adjacent room or the corridor.
You can't always get what you want, to coin a phrase. That's routinely true of public accommodations, where our experiences — travel, dining, lodging, entertainment — must be shared with other human beings, in all their not-always-congenial variety. It makes life worse for all of us when people become so obsessed with their own satisfaction that they convince themselves they have a guaranteed right to it. Common courtesy and self-control used to be esteemed as indispensable to a healthy society. But the more we rely on law and regulation to maintain social order, the less we seem to emphasize good character and values.
Most air travelers, most of the time, don't descend into rudeness and selfishness. But as the obnoxious "I-have-a-right" mindset grows ever more entrenched, clashes like the one involving the Knee Defender are apt to proliferate. Barro wants to be paid not to recline into the lap of Darlin, sitting behind him. Darlin claims the freedom to "reallocate" Barro's ability to move his seat. Compromise? Consideration? Thoughtfulness? Nothing doing. For some people, the right to be a jerk trumps all.
(Jeff Jacoby is a columnist for The Boston Globe).
-- ## --
Posted by Leo Rugiens at 1:45 PM