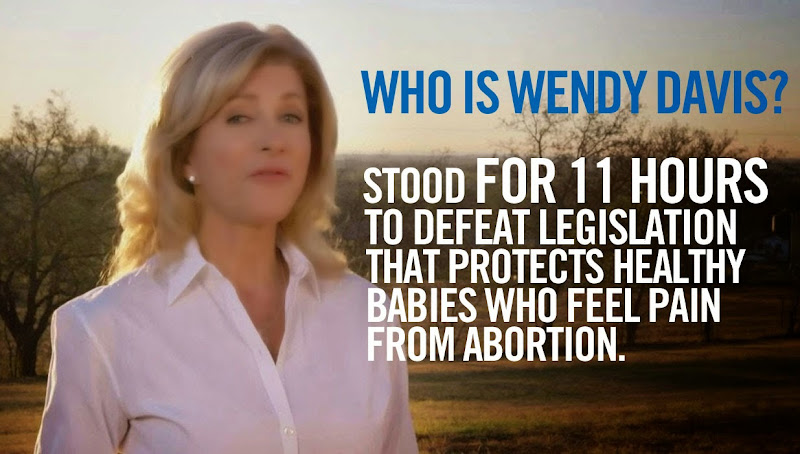 WHO IS WENDY DAVIS?
Bishop Gracida --

The impact of Texas gubernatorial candidate Wendy Davis' recent admission to two abortions in the 1990s will likely be two-fold. First, the declaration will probably energize her core base of radical liberal supporters, the abortion-on-demand-for-any-reason-through-all-nine-months mob who catapulted Davis to national attention last summer. Second, that Davis chose abortion rather than nurturing and caring for a child with special needs will do nothing to help erase her persona as a single-issue candidate: the Texas abortion crusader.

The media frenzy about Davis' "choices” thwarts her campaign's relentless work to divert attention from her filibuster and the subject of the filibuster: abortion.

While Wendy Davis' claim to have aborted due to fetal abnormality doesn't help her case, her choice does raise questions about denying the right to life to disabled, unborn children. When those who campaign on the rights of the weak and vulnerable in our society inflict death sentences before the weak and vulnerable ever take their first breath, how these politicians will protect those of us who are already born with weakness and vulnerability should be a concern to all.

The humanness of every person, born and unborn, typical and disabled, is jeopardized if the less-than-perfect or those medically diagnosed as disabled while still in the womb are not given a chance to breathe, to thrive, to live, to recover, to love and be loved ... or to filibuster in pink sneakers.

Sadly, no one should be surprised by Ms. Davis' abortions. Terminating the life of unborn children is her cause, her raison d'etre; her positions on other issues vanished when she championed killing large, healthy, unborn children. For. Eleven. Hours. She made her worldview perfectly clear without apology when she led the charge opposing the Texas Pro-Life law. There is no mystery about her views on abortion, and her own abortions are congruent with her position and rationale.

Davis' admission should not cause a discussion of the politics of abortion; the discussion should be how to empower parents who are expecting children with disabilities. Why not instead talk about teaching and equipping parents to welcome their children into the world and into their families? Why not ask other parents who have undergone the same challenges to come alongside parents who receive the news?

Perhaps these events will open doors for reviewing the availability, funding, and options of perinatal hospice care. Perhaps we will hear even more stories of the precious weeks or only moments with a newborn whose life was brief but ever so meaningful and blessed. But we won't hear that from Davis.

Davis' stated experiences confirm what many post-abortive women feel: the emotional aftermath of abortion. Too often, the accounts of mental health problems and extreme emotional lows after abortion are dismissed by those who profit from abortion and whose campaigns are funded by Big Abortion (Planned Parenthood, Emily's List, NARAL, etc.). Perhaps Davis' story will cause some in her own party and her political-backers to acknowledge the toll an abortion takes on a woman's overall health and well-being. In Texas, roughly 73,000 abortions are still committed annually. The women making these tragic choices are our mothers, sisters, nieces, friends, co-workers, and fellow church members, and these women are all around us. Knowingly or not, we interact every day with women who have chosen abortion, and probably far more public officials than just Wendy Davis have made this deadly choice.

If abortion really is normal and accepted as a routine medical procedure, why the news? Why the big admission?

To divert attention from her filibuster that favored the killing of perfectly healthy babies with gruesome late-term abortions, Davis must point voters to the extremely difficult cases. But over 95% of all abortions are not due to the hard cases: rape, incest, life of the mother, or severe fetal abnormality. Even the Alan Guttmacher Institute, Planned Parenthood's research arm, shows that respondents to their own survey rarely choose abortion due to fetal abnormality or health risk. In the study entitled "Why Women Have Abortions,” the top three reasons on why women seek abortions included:
1. the woman was not ready for the responsibility of raising a child;
2. unable to financially afford the child; and
3. concern on how having a child would change the woman's life.
These above reasons are increasingly not acceptable to a voting public. Abortion remains a huge albatross around Ms. Davis neck when the voters, especially Democrat Hispanic Christians, learn of Wendy’s extremist position on abortion, especially the late term abortion of perfectly healthy babies.

To stop the attempt to normalize abortion as a standard procedure, Molly White, a newly elected Republican nominee to the Texas State House, has openly shared her story of past abortion. Unlike Wendy, Molly has worked for decades in many countries on many continents to help women choose life. Molly has worked to expand resources for women so they won't choose abortion and suffer the decades-long heartache and anguish that countless other post-abortive women endure, often alone and in silence. Molly has never used her abortion as a political tool; she shares her story in the context of women's health care. Juxtapose Molly and her heart's desire to encourage and support women with the Davis admission that "abortion was the answer." Twice.

Politically, if Wendy Davis wants to win, she must redirect her campaign and focus on issues other than abortion when her extreme views on this subject are not embraced by the average American citizen and are repugnant to the average Texas voter. More importantly, if Wendy Davis wants to truly improve the lives of the average Texan, she should champion the value of every human being—born, unborn, disabled, abled, young, or old.

But then Wendy would sound a lot like Molly White or, more importantly, Greg Abbott, who knows more than a little about the intrinsic worth of a person with a disability.