CASTRO CELEBRATED THE RESUMPTION OF DIPLOMATIC RELATIONS WITH THE U.S. BY ARRESTING 80 DISSIDENTS 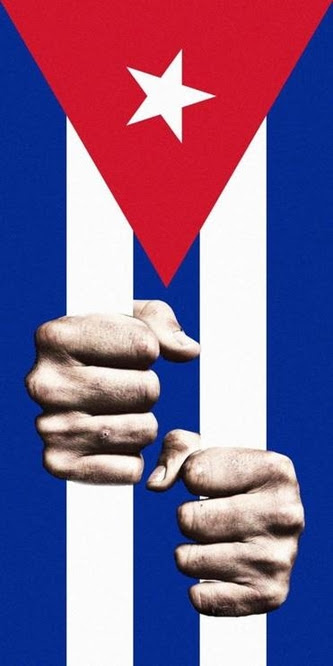 Cubans pay the price for Obama's 'engagement' with the Castros


ON JULY 1, President Obama announced the formal resumption of diplomatic relations with Cuba, asserting confidently that "American engagement ... is the best way to advance our interests and support for democracy and human rights."
On July 5, the Communist regime in Havana delivered its customary response. It arrested more than 80 democratic dissidents, including at least 60 members of Ladies in White, a peaceful group of brave women who march weekly in support of husbands, fathers, and other relatives imprisoned in the Castros' jails. Many of those detained were hurt, some severely. One prominent human-rights activist, Antonio Rodiles, was sent to the hospital with a shattered nose; he had reportedly been handcuffed by security forces, then beaten for shouting "Long live freedom" and "Long live human rights."

There had been even more arrests and beatings in the days leading up to Obama's Rose Garden statement. Some 225 Cuban dissidents across the island were arrested the previous Sunday, with Ladies in White again prominent among those targeted. In fact, there have been police actions against Cuban democrats for 12 Sundays in a row — the government makes a point of going after dissidents as they walk to Mass or emerge from church holding photos of imprisoned loved ones.
Like most US advocates of normalizing relations with the only all-out dictatorship in the Western Hemisphere, Obama claims that warming up to the Castro regime is the most effective way to promote freedom and liberal reform in Cuba. When he announced last December that ties between Havana and Washington were going to be restored, the president declared that "we can do more to support the Cuban people and promote our values through engagement." Now, nearly seven months later, he reiterates "America's enduring support for universal values, like freedom of speech and assembly," and he insists that his administration "will not hesitate to speak out when we see actions that contradict those values."
No? Over the past seven months, life for Cuba's people has grown even more oppressive and unfree. Yet far from forthrightly condemning the brutality, Obama serenely counsels patience: "Nobody expects Cuba to be transformed overnight," he says.
There have been more than 3,000 political detentions on the island since last December, according to The Washington Post. The paper quotes Mario Felix Lleonart, a Cuban Baptist pastor who laments that he, like many, "had hoped, following the announcement about normalizing relations between the US and Cuba, that there would be a stop to — or at least a lessening of — the beatings" of dissidents. "We now know that what is happening is precisely the opposite."
The policy that Obama now embraces is also "precisely the opposite" of the one he feigned to uphold as a candidate for president.
Like opposing same-sex marriage and guaranteeing that Americans could keep their health plan if they liked it, Obama reversed course on normalizing relations with Cuba, which he was clear could only come after, not before, "significant steps towards democracy." Once upon a time, Obama maintained that there would be no American embassy in Havana until all of Cuba's political prisoners were free. Now he trumpets John Kerry's forthcoming trip to Havana "to proudly raise the American flag over our embassy once more," even as Cuba continues to lock up men and women for daring to seek the democratic liberties Americans take for granted.
The Obama administration is bestowing tremendous gifts on Cuba's rulers: diplomatic legitimation, a public-relations triumph, an influx of hard currency, and expanded influence in Washington. All this the Castros are getting in exchange for nothing: no elections, no free press, no end to beating of peaceful protesters, no justice for the many victims of Cuban totalitarianism.
"Castroism has won," mourned the Cuban dissident Yoanni Sanchez last winter, when Obama announced an end to America's principled policy on Cuba. If it wasn't obvious then, it is now.
(Jeff Jacoby is a columnist for The Boston Globe).
-- ## --
Posted by Leo Rugiens at 12:38 PM