AMERICANS WANT A RETURN TO STANDARDS IN CIVIL LIFE

Give Me That Old-Time Religion

The canyons of Wall Street are ringing with Democratic politicians and liberal pundits crying out for the renewal of ancient values and a return to basics. The political right wants market failures to be punished with Old Testament ruin.

The financial crisis has brought calls for a return of ethics, standards and rules -- and not just on Wall Street. Dan Henninger tells Kelsey Hubbard how these themes are affecting the campaign trail. (Sept. 25)

So we're all agreed: Standards of behavior matter.

All that remains is to see if this week's left-right consensus on standards can be extended to any corner of American life beyond "CEO pay" and other sitting ducks.

Once we're done imposing Spartan discipline on the dining rooms of Wall Street, how about some of the same for the halls and classrooms of the average inner-city high school? A nation in panic at the sight of banks imploding has yawned for years while the public-school system melted down.

A handful of Supreme Court decisions going back 40 years relaxed standards of oversight for dress codes, comportment, speech and expulsion, and the average school principal or teacher threw in the towel on daily discipline. Not my job. 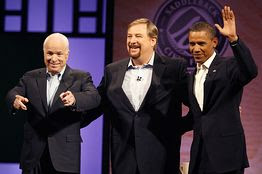 Many school administrators can relate to the frontline mortgage-lending officers, some of them old-school bankers who used to help young borrowers understand the difference between the real world and probable ruin. That's what high-school principals used to do. No more.

Suddenly, local lenders were toiling (if they survived) in the easier liar-loan world fostered by Congress, Fannie and Freddie and guys with great tans in Los Angeles. The old public-school system, once a tight ship in countless towns, knew that game. The schools learned to shove another class of semi-educated bodies into the street every June and call them "graduates" the same way lenders called zero-down-payment borrowers "homeowners."

This column isn't a rant about the ruined schools. It's about spotting a ray of hope amid the past week's rubble in the financial markets. Something positive has been in the air this election, and all the calls now for a return to financial rectitude is part of it.

On Monday, Barack Obama gave a tough speech on cleaning up Washington. The details may be blather, but the cleanse-the-temple tone was out of a Jerry Falwell sermon circa 1980. He appealed to "our core values" and denounced an "ethic of irresponsibility." Both John McCain and Sen. Obama are selling repentance in politics.

Two months ago, one of the campaign's most important events took place at Saddleback Evangelical Christian Church, the Rev. Rick Warren presiding.Before that in April, Hillary Clinton and Mr. Obama did a "Compassion Forum" at Messiah College in Grantham, Pa. Sen. Clinton talked about feeling the Holy Spirit "on many occasions." Mr. Obama was still wearing sackcloth for "cling to religion."

This election may be won by whichever man looks better riding an economic surfboard the next month, but the campaign's undercurrents are pushing the basics back to the surface.

Yes, politicians will bend to any new wind that blows through, but this past week of financial turmoil has shown there's a strong whiff in the air for the values of the greatest generation. This was the 20% generation. In the post-war years, young couples knew they'd somehow have to save 20% of the down payment on a home mortgage. That's thrift, an archaic word I think is still in most dictionaries.

Push this idea far enough, and you're talking the world of "Ozzie and Harriet" (ABC-TV 1952-1966) versus "Sex and the City" (HBO, 1998-2004). Push further and you arrive at happy Sarah Palin and that family of hers. What Sarah represents produces pushback from the smart-set women on "The View" and big-city comedians and newspaper columnists, all trying to knock Little Miss Muffet off her too-perfect tuffet.

This, in short, is the culture wars -- endless and unwinnable. Until this week. This week revealed that when real money is on the line, even the left starts screaming for old-fashioned standards. Thus rose a shout for regulatory "oversight" of markets, and they don't mean some vague, Googlie "don't be evil." They want tough, punishing rules.

This won't wash. You can't claim, as holier-than-thou politics is now, that sending an army of regulatory storm-troopers into Wall Street will ensure integrity in mere bankers who themselves come from a broader, anything-goes culture.

There's a reason Barack Obama is delivering secular sermons in places like Green Bay, Wis. Green Bay's beef with a culture of corner-cutting predated Bear Stearns. Wall Street hasn't been the only font of wretched excess. More than opportunism has landed this presidential campaign in places that represent standards, like Saddleback in California and Messiah in Pennsylvania. People want standards again because they work -- in business, in schools, in daily life.

In my ear, I can hear one of the four candidates giving a speech connecting Wall Street to the nation's Main Streets. Standards, responsibility, accountability, rules? You bet. Bring 'em all back.

I wonder which one of them would give it.