BARNEY FRANK, LOOK IN THE MIRROR AND SEE WHO IS TO BLAME FOR THE PRESENT FINANCIAL MESS

WHOSE MESS, CONGRESSMAN FRANK?
By Jeff Jacoby
The Boston Globe
Sunday, September 28, 2008
http://www.boston.com/bostonglobe/editorial_opinion/oped/articles/2008/09/28/franks_fingerprints_are_all_over_the_financial_fiasco/
“The private sector got us into this mess. The government has to get us out of it.”
That's Barney Frank's story, and he's sticking to it. As the Massachusetts Democrat has explained it in recent days, the current financial crisis is the spawn of the free market run amok, with the political class guilty only of failing to rein the capitalists in. The Wall Street meltdown was caused by “bad decisions that were made by people in the private sector,” Frank said; the country is in dire straits today “thanks to a conservative philosophy that says the market knows best.” And that philosophy goes “back to Ronald Reagan, when at his inauguration he said, ‘Government is not the answer to our problems; government is the problem.’ ”

In fact, that isn't what Reagan said. His actual words were: “In this present crisis, government is not the solution to our problem; government is the problem.” Were he president today, he would be saying much the same thing.
Because while the mortgage crisis convulsing Wall Street has its share of private-sector culprits -- many of whom have been learning lately just how pitiless the private sector’s discipline can be -- they weren't the ones who “got us into this mess.” Barney Frank's talking points notwithstanding, mortgage lenders didn't wake up one fine day deciding to junk long-held standards of creditworthiness in order to make ill-advised loans to unqualified borrowers. It would be closer to the truth to say they woke up to find the government twisting their arms and demanding that they do so -- or else.
The roots of this crisis go back to the Carter administration. That was when government officials, egged on by left-wing activists, began accusing mortgage lenders of racism and “redlining” because urban blacks were being denied mortgages at a higher rate than suburban whites.
The pressure to make more loans to minorities (read: to borrowers with weak credit histories) became relentless. In 1977 Congress passed the Community Reinvestment Act, empowering regulators to punish banks that failed to “meet the credit needs” of “low-income, minority, and distressed neighborhoods.” In 1995, under President Clinton, the law was made even more stringent. Lenders responded by loosening their underwriting standards and making increasingly shoddy loans. The two government-chartered mortgage finance firms, Fannie Mae and Freddie Mac, encouraged this “subprime” lending by authorizing ever more “flexible” criteria by which high-risk borrowers could be qualified for home loans, and then buying up hundreds of billions of dollars’ worth of the questionable mortgages that ensued. Some state and local governments added pressure of their own.
All this was justified as a means of increasing homeownership among minorities and the poor. Affirmative-action policies trumped sound business practices. A manual issued by the Federal Reserve Bank of Boston advised mortgage lenders to disregard financial common sense. “Lack of credit history should not be seen as a negative factor,” the Fed's guidelines instructed. Applicants lacking sufficient savings to cover a down payment and closing costs should be allowed to rely instead on “gifts, grants, or loans from relatives, nonprofit organizations, or municipal agencies.” Lenders were even directed to accept welfare payments and unemployment benefits as “valid income sources” to qualify for a mortgage. Failure to comply could mean a lawsuit.
As long as housing prices kept rising -- and with millions of otherwise unqualified borrowers adding to demand, they did -- the illusion that all this was good public policy could be sustained. But it didn't take a financial whiz to recognize that a day of reckoning would come. “What does it mean when Boston banks start making many more loans to minorities?” I asked in this space in 1995. “Most likely, that they are knowingly approving risky loans in order to get the feds and the activists off their backs . . . When the coming wave of foreclosures rolls through the inner city, which of today's self-congratulating bankers, politicians, and regulators plans to take the credit?”
Not Barney Frank. And yet his fingerprints are all over this fiasco. Time and time again, Frank insisted that Fannie Mae and Freddie Mac were in good shape. Five years ago, for example, when the Bush administration proposed much tighter regulation of the two companies, Frank was adamant that “these two entities, Fannie Mae and Freddie Mac, are not facing any kind of financial crisis.” When the White House warned of “systemic risk for our financial system” unless the mortgage giants were curbed, Frank complained that the administration was more concerned about financial safety than about housing.
Now that the bubble has burst and the “systemic risk” is apparent to all, Frank blithely declares: “The private sector got us into this mess.” Well, give the congressman points for gall. Wall Street and private lenders have plenty to answer for, but it was Washington and the political class that derailed this train.

If Frank is looking for a culprit to blame, he can find one likely suspect in the nearest mirror.
(Jeff Jacoby is a columnist for The Boston Globe.)

In case you have forgotten just who Barney Frank is, here is an excerpt from the Wikipedia:

Frank was born to a Jewish family in Bayonne, New Jersey and was educated at Harvard College, where he resided in Kirkland House and then Winthrop House, graduating in 1962. He taught undergraduates at Harvard while studying for a Ph.D., but left in 1968, before completing that degree, to become the Chief Assistant to Mayor Kevin White of Boston, a position he held for three years. He then served for one year as Administrative Assistant to Congressman Michael J. Harrington.

In 1972, Frank was elected to the Massachusetts House of Representatives, where he served for eight years. During that time, he entered Harvard Law School and graduated in 1977.

While in state and local government, Frank taught part time at the University of Massachusetts Boston, the John F. Kennedy School of Government at Harvard and at Boston University. He published numerous articles on politics and public affairs, and in 1992 he published Speaking Frankly, an essay on the role the Democratic Party should play in the 1990s.

In 1979, Frank became a member of the Massachusetts Bar. A year later, he won the Democratic nomination for the seat of Father Robert Drinan, who had left Congress following a call by Pope John Paul II for priests to withdraw from political positions. In 1982, redistricting forced him to run against Republican Margaret Heckler. The newly configured district retained Frank's district number — the 4th — but was geographically more Heckler's district. Initially a heavy underdog, he focused on Heckler's initial support for President Ronald Reagan's tax cuts, and won by 20 percentage points. He hasn't faced credible opposition since, and has been reelected 12 times. The Republicans have not fielded an opponent against him since 2002. 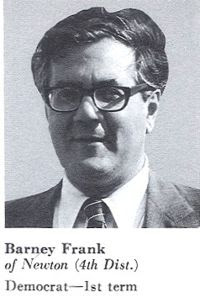 Frank is one of the most liberal members of the House[citation needed], and has been outspoken on many civil rights issues, including gay rights. In 1987, he spoke publicly about his homosexuality for the first time. He said in a 1996 interview: "I'm used to being in the minority. I'm a left-handed gay Jew. I've never felt, automatically, a member of any majority."

In 1990, the House voted to reprimand Frank when it was revealed that Steve Gobie, a male escort whom Frank had befriended after hiring him through a personal advertisement, claimed to have conducted an escort service from Frank's apartment when he was not at home. Frank had dismissed Gobie earlier that year and reported the incident to the House Ethics Committee after learning of Gobie's activities. After an investigation, the House Ethics Committee found no evidence that Frank had known of or been involved in the alleged illegal activity.[2] Regarding Gobie's more scandalous claims the report by the Ethics Committee concluded, "In numerous instances where an assertion made by Mr. Gobie (either publicly or during his Committee deposition) was investigated for accuracy, the assertion was contradicted by third-party sworn testimony or other evidence of Mr. Gobie himself."[3]

The New York Times reported on July 20, 1990 that the House Ethics Committee recommended "that Representative Barney Frank receive a formal reprimand from the House for his relationship with a male prostitute."[4] Attempts to expel or censure Frank, led by Republican member Larry Craig (who himself was later embroiled in his own homosexual scandal) failed.[5][6] Rather, the House voted 408-18 to reprimand him.[7] This condemnation was not reflected in Frank's district, where he won re-election in 1990 with 66 percent of the vote, and has won by larger margins ever since.