THERE ARE TOO MANY PROSTITUTES IN CONGRESS 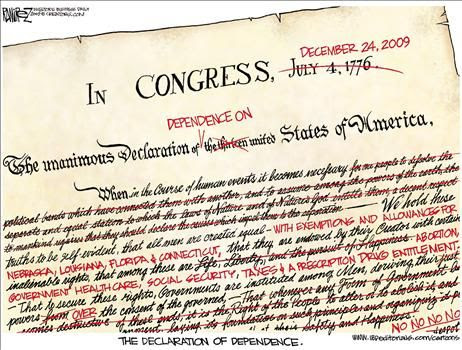 HOW TO LOSE FRIENDS AT LITTLE PRICE

By Wesley Pruden
THE WASHINGTON TIMES
Wednesday, 23 December 09
Rarely has a cowboy castrated himself in public like Ben Nelson, the senator from Nebraska, who becomes an object lesson in how a United States senator easily trades his "convictions" and "principles" for perfectly legal bribes from cynical party leaders.
When the inevitable howling erupted in Nebraska, all the senator could come up with was a variation on the oldest excuse in Washington: "I didn't do it, and maybe I won't do it again."
The senator's profile in phony determination to prevent federal financing of abortion earned him rebuke and scorn from abortion foes and advocates alike. What angered everyone was how easily he took the bribe, and how public the transaction was. After all the declarations of undying dedication to "conviction" and "principles," when Barack Obama offered the deal he offered no one else, to pay for the expanded Medicare costs for the state of Nebraska and let's forget about abortion, the senator capitulated with enthusiasm.
He tried to blame the governor. The governor, David Heineman, "contacted me, and he said this is another unfunded federal mandate, and it's going to stress the state budget, and I agreed with him," the senator said. "I said to [Majority Leader Harry Reid] that this is something that has to be fixed. I didn't participate in the way it was fixed." (He only dropped into the bordello for a shot of bonded courage, never dreaming that anything naughty was going on upstairs.)
The governor, abandoning the way governors and senators from their states protect each other's reputation for truth-telling, stuck it to the senator this time with a vengeance. He had nothing to do with the senator's "compromise," he said, and the health care bill is "bad news for Nebraska and for the United States. Nebraskans did not seek a special deal, only a fair deal."
The senator's clumsiness was followed by the inevitable whine of a politician caught with his pants down. "This is all so orchestrated," he said of the stinging backlash from the home folks. "It's so thinly disguised, it's almost laughable." But he didn't sound like a man almost laughing. Even his Nebraska colleague in the Senate, Mike Johanns, ignoring a venerable tradition that a senator doesn't rebuke the other senator from his state, said he was "stunned and disappointed" because the "compromise" language was a "watered-down accounting gimmick that leads to Nebraska taxpayers subsidizing abortions in other states."
Every president mirrors in ways large and small the politics he learned back home, and the administration's use of the battering ram in behalf of a scheme that grows more unpopular day by day reflects the down-and-dirty politics of Chicago. Richard Daley the Original lives and breathes on Capitol Hill.
It's an ill wind that blows nobody good, and the senator's colleagues can be grateful for the diversion of attention from the actual outrage. Max Baucus, the chairman of the Senate Finance Committee, told the Senate that ObamaCare is so convoluted that no one (not even the dozens of lawyers who wrote it) actually understands it. The president insists that the change nobody believes in will reduce costs for everybody.
"Anyone who suggests otherwise simply hasn't read the bills," he says. Maybe that's why he so sure he's right; he hasn't had time to read 2,000-plus pages of the bill, either. Victor Fuchs, a highly regarded economist who supports ObamaCare, says a lot of the White House theory is simply simplistic. "The oft-heard promise that 'we will find out what works and what does not' scarcely does justice to the complexity of medical practice."
Some of those who understand medical complexity best argue that the dead hand of government will inevitably stay the innovation and technology that makes American medicine the envy of the world. Almost nobody here goes to Europe when gravely ill, but Europeans flock to America when hope is exhausted at home. When the unelected bureaucrats gain control of everything from bedpans to MRI machines, the dean of the Harvard Medical School warns "our capacity to innovate and develop new therapies would suffer most of all."
Nevermind. The president has the reform that does less and costs more. Earl Long, the late governor of Louisiana, once boasted that he could take a hundred-dollar bill and get anything through his legislature "and buy you a steak dinner with what I'll have left over."
President Obama goes that one better. He did it with a bribe of somebody else's money.
c Wesley Pruden is editor emeritus of The Washington Times.