THE WATCHWORD OF THIS ADMINISTRATION IS NOT "GOVERN" IT IS "GROVEL" 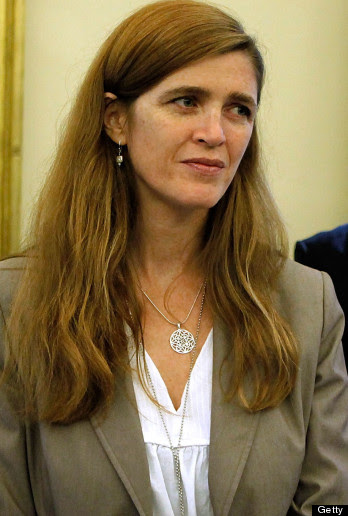 When a bow is not deep enough


A deep bow to our “friends” in the Middle East no longer satisfies Barack Obama’s White House. His new ambassador-to-be to the United Nations has a better idea. Samantha Power thinks the president should take a deferential knee. (It worked for Al Jolson, paying tribute to Mammy.)

Mzz Power is nothing if not flexible, and admires “flexibility” in presidents paying court to the nation’s adversaries and enemies. This president just hasn’t bowed deeply enough to suit her.

A decade ago, when Mzz Power was a learned perfessor at Harvard, she set out a few guidelines for how an American president could earn the respect of the squalid and the corrupt, envious as they are of American pelf and power.

She held up the example of German Chancellor Willy Brandt, who in 1970, eager to expiate the sins of the Nazis, went to one knee on a street in the old Warsaw ghetto, scene of one of the great atrocities of World War II, to apologize for the unspeakable and the unforgivable.

“A country has to look back before it can move forward,” she wrote of the gesture in New Republic magazine. “Instituting a doctrine of the mea culpa would enhance our credibility by showing that American decision-makers do not endorse the sins of their predecessors. When [Willy] Brandt went down on one knee in the Warsaw ghetto his gesture was gratifying to World War II survivors, but it was also ennobling and cathartic for Germany. Would such an approach be futile for the United States?”


“Futile” is not the word for such a gesture. “Sick” is the word. Franklin D. Roosevelt and Harry S Truman, who led the coalition of the civilized in World War II, were neither Nazis nor evil-doers, nor were the 291,000 Americans who shed their blood to liberate Europe and the Pacific from the embrace of Nazis and their journeymen in evil.
Mzz Power’s infamous essay – for which she has apologized, though for getting caught at saying it, not for thinking it – was titled, “Why do they hate us?” In it, she concedes that George W. Bush was right about “some” America-bashers when he rightly and accurately said “they hate our freedoms – our freedom of religion, our freedom of speech, our freedom to vote and assemble and disagree with each other.” But Mzz Power thinks her adopted land deserves the abuse of the bashers and malicious malcontents. “U.S. foreign policy has to be rethought,” she wrote. “It needs not tweaking but overhauling. We need: a historical reckoning with crimes committed, sponsored or permitted by the United States.”


Wes Pruden is the Editor Emeritus of The Washington Post

1
: to creep with the face to the ground : crawl
2
a : to lie or creep with the body prostrate in token of subservience or abasement b : to abase oneself
3
: to give oneself over to what is base or unworthy : wallow <groveling in self-pity>
— grov·el·er noun
— grov·el·ing·ly adverb

back-formation from groveling prone, from groveling, adverb, from Middle English, from gruf, adverb, on the face (from Old Norse ā grūfu) + -ling
First Known Use: 1552