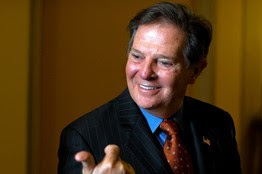 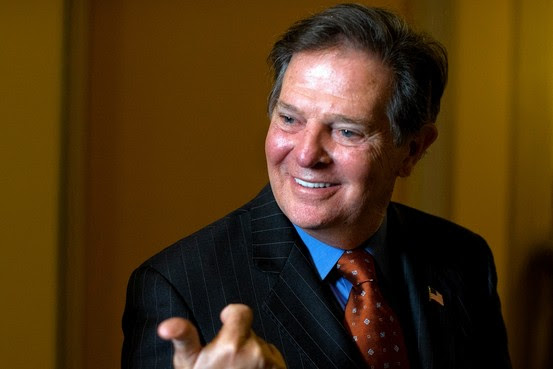 Former House Majority Leader Tom DeLay on Thursday in Washington
Mr. DeLay had been found guilty of channeling $190,000 in corporate political donations to Republicans running for the Texas Legislature in 2002 as he helped a push to redraw congressional district lines in the state. Texas election law prohibits corporate campaign contributions to state candidates.

.
But the Texas appellate court in Austin overturned the verdict and acquitted Mr. Delay. He faced a three-year prison term, though he has been free on bond while appealing his conviction.
"I just thank the Lord for carrying me through all this," Mr. DeLay said in Washington. He said he had been praying Thursday with a group of men trying to mount a national prayer effort when "my lawyer calls and says, 'You're a free man.' "

.
The Austin-based Travis County District Attorney's Office, which brought the case, said it "strongly" disagreed with the opinion, adding that appellate judges "substituted their assessment of the facts for that of 12 jurors who personally heard the testimony of over 40 witnesses over the course of several weeks." The office said it would appeal the ruling.

.
Mr. DeLay, who left Congress in 2006, and his legal team have long claimed that the prosecution was a political witch hunt brought against him because of his political prowess.
"Regardless of what you think about Tom, at the end of the day he did not violate a rule or law that should have exposed him to the prosecution and persecution he has been exposed to over the last decade," said Mr. DeLay's appellate lawyer, Brian Wice. He said the conviction devastated Mr. Delay, "driving a stake through the heart of what he thought would be his golden years." 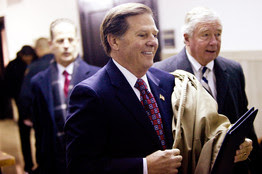 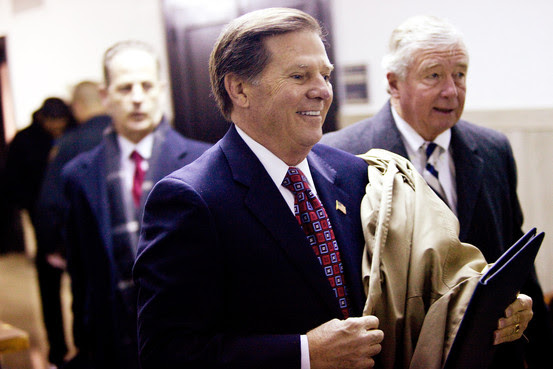 .
During the 2010 trial, prosecutors said Mr. DeLay was involved in a Texas-based Republican political committee that funneled $190,000 in corporate contributions to a committee associated with the Republican National Committee that later contributed the amount to seven Texas state candidates.
But the appellate court ruled that the contributions were legal because they came from a bank account that wasn't commingled with the one that contained the corporate donations. "The state failed in its burden to prove that the funds that were delivered to the seven candidates were ever tainted," the court said.

.
Since leaving office, the 66-year-old former congressman has been a consultant and public speaker. He also appeared on the television show "Dancing with the Stars."

.
A version of this article appeared September 19, 2013, on page A5 in the U.S. edition of The Wall Street Journal, with the headline: Texas Appeals Court Reverses Tom DeLay's 2010 Conviction.
Posted by Leo Rugiens at 12:50 PM