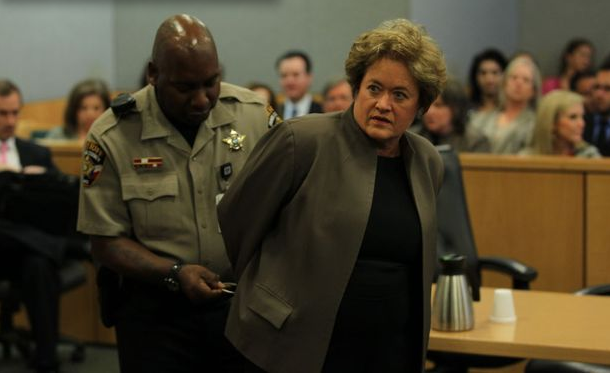 In 2013, Lesbian Rosemary Lehmberg, [Democrat official] District Attorney in Austin, TX’s Travis County, was arrested for drunk driving 3x the legal limit, for abusing officers, trashing her jail cell, abusive language, striking an officer, etc.  She had to be restrained with bindings and strapped to a chair in her cell.  Still, she yelled filthy slurs against the police and jailers, then spent 45 days in jail.    She is openly ‘gay' and a known alcoholic. People in Austin, Tx. [hard-core liberals] love this type of woman.

Now, tell me again why Gov. Rick Perry is being indicted for vetoing funds to her office when this despicable D.A. refused to resign under the shame of her actions, her arrest record, her uncontrolled alcoholism and her abuse behavior to the good Servants [policemen] of the People.  Oh, yeah, it’s because he will likely be a 2016 candidate for U.S. President.  Destroy his good reputation.

Next week he will be taken down to police station, booked and arraigned like a criminal, but best of all for the Democrats a mug shot taken that will be broadcast millions of times over and over.  You and I realize how dumb U.S. voters are.   Few will know the true details behind the Perry indictment, including the infamous Perry police mug shot.   Democrat Party voters in 2016 will again, as usual, consist of illegal, non-English speaking immigrants, including dead people whose I.D. have been stolen.