YOU HAVE GOOD REASON TO NOT SIGN THE ORGAN DONOR CARD

Why the thought of organ donation makes me nervous 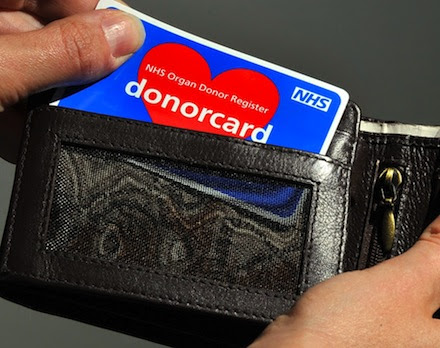 'The more divided the medical establishment seems to be on "brain death", the more I hesitate to sign an organ donation card' (PA)
My blog for July 25 discussed the case of a baby born with anencephaly, a terminal condition, whose parents, devout Christians, had made the decision to donate his organs to help other sick babies. As it turned out, he was born prematurely and his organs were too immature for the purpose of donation, so after a brief period on a respirator, he was allowed to die naturally when his heart stopped beating. During the radio debate on the case I learnt that the criteria for what is called “brain death” is not used on babies as they are simply too tiny for it to be feasible. But it is used routinely in the case of adults whose organs are to be donated.
It brought me back to the whole question of organ donation after death – which is approved by the Church: note 2301 in the Catechism of the Catholic Church states that “the free gift of organs after death is legitimate and can be meritorious.” I agree with this in theory – but in practice I have never signed one of those cards that you are meant to carry around with you, giving permission for your organs to be harvested when you die. I feel too nervous about the whole subject – probably quite irrationally – having read of those rare yet widely publicised cases of people being thought to be dead by doctors, but who then make a seemingly miraculous recovery. All this (plus a dose of “premature burial” stories in Edgar Allan Poe, which I read in my youth) is enough to make me cravenly hesitate.
A recent article from the Life Issues Institute has resurrected my own fears. It discusses the case of a 21-year-old, Sam Schmid, who was severely injured in a car crash in Arizona. “Thought to be brain dead, hospital personnel began palliative care and discussed organ donation with his parents. They contemplated taking Sam off life support. But much to the surprise of everyone, he began to respond. In an act that defied explanation, Sam held up two fingers. That simple action quite possible saved his life…”
The article points out that the traditional definition of death occurred when you stopped breathing. In 1968 a paper was published in the Journal of the American Medical Association that first introduced the notion of “brain death” as a determination of death. This coincided with new technology making the transplant of vital organs feasible for the first time. In 1981 in America, “brain death” was defined as the “irreversible cessation of circulatory and respiratory functions, or the irreversible cessation of all functions of the entire brain, including the brain stem.”
The article argues that the current criteria for brain death are not “infallible”, begging the question: is “brain death” truly death – especially when the functions of breathing and circulation have to be maintained to prevent vital organs from deteriorating? There is much about brain function that is not yet understood – as those medically inexplicable cases of patient recovery make clear. And at the same time the demand for viable organs also means that there is, as the article points out, a “vested interest” in a “brain dead” diagnosis. A longer article in Catholic World Report for April 27 2011, by JJ Ziegler, entitled “The principle of caution must remain”, raises all these same issues in greater depth. The more I read, the more divided the medical establishment seems to be on this subject – and the more I hesitate to sign an organ donation card.
Posted by Leo Rugiens at 5:15 PM