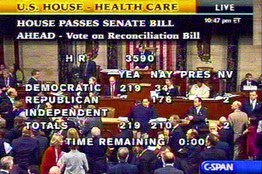 
By KARL ROVE
Democrats are celebrating victory. The public outcry against what they've done doesn't seem to bother them. They take it as validation that they are succeeding at transforming America.
But we've seen this movie before and it won't end happily for Democrats. Their morale rose when the stimulus passed in February 2009. The press hailed it as a popular answer to joblessness and a sluggish economy. At the time, Democrats thought it brightened their chances in the 2009 gubernatorial elections.
But a flawed bill, bumbling implementation, and unfulfilled expectations turned the stimulus into a big drag on Democrats in Virginia and New Jersey. A CBS News/New York Times poll recently reported that only 6% of Americans believe the stimulus package created jobs.
Democratic hopes that passing health-care reform will help them politically will be unfulfilled because ObamaCare only benefits a small number of people in the short run. Until the massive subsidies to insurance companies fully ramp up in 2017, this bill will be more pain than gain for most Americans.
For example, changes in insurance regulations in 2011 and two new mandates in 2014 that force everyone to buy insurance and require everyone to be charged a similar price regardless of age or health will cause insurance premiums to rise more than they would have otherwise. The 10 million people who have a health savings account will also be hurt starting in 2011. With each passing year after that, they will be able to put less away tax free for medical expenses.
ObamaCare cuts $1.8 billion in support for Medicare Advantage this October, another $5.8 billion in October 2011, and an additional $9.2 billion right before the 2012 presidential election. This will increase premiums and reduce benefits for the 4.5 million people in the program.
Drug companies will start raising prices to pay billions in new taxes they will have to pay starting next year. New taxes on medical devices and insurance companies will show up in higher prices and premiums before long.
Polls may show a temporary increase in the president's popularity, but underlying public opinion about this law is not likely to change just because the president hits the trail to sell it. After all, he made 58 speeches before the measure passed, including two in prime time.
Before that string of speeches the public was in favor of the concept of health-care reform by a ratio of 2 to 1. Afterward, about 60% of the public was opposed to the president's plan. Those who strongly opposed outnumbered those strongly in favor by 2 to 1 or better in most polls.
Tens of millions of ordinary people watched the deliberations, studied the proposals, and made up their minds. Their concerns about spending, deficits and growing government power are not going away.
Nor is their opposition to ObamaCare. According to a new CNN poll, majorities of Americans believe that they will pay more for medical care, the federal deficit will increase, and that government will be too involved in health care under the president's plan.
Democrats claim they've rallied their left-wing base. But that base isn't big enough to carry the fall elections, particularly after the party alienated independents and seniors. The only way Democrats win a base election this year will be if opponents of this law stay home.
To keep that from happening, Republican candidates must focus on ObamaCare's weaknesses. It will cost $2.6 trillion in its first decade of operation and is built on Madoff-style financing. For example, it double counts Social Security payroll taxes, long-term care premiums, and Medicare savings in order to make it appear more fiscally responsible. In reality, ObamaCare isn't $143 billion in the black, as Democrats have claimed, but $618 billion in the red. And giving the IRS $10 billion to hire about 16,000 agents to enforce the new taxes and fees in ObamaCare will drive small business owners crazy.
Republicans have a powerful rallying cry in "repeal, replace and reform." Few voters will want to keep onerous mandates that hit individuals and taxes that hobble economic growth. Rather than spending a trillion dollars on subsidies for insurance companies and Medicaid expansion, as ObamaCare does, Republicans should push for giving individuals the same health-insurance tax break businesses get, which would cost less.
Republicans must also continue to press for curbing junk lawsuits, enabling people to buy insurance across state lines, increasing the amount of money they can sock away tax free for medical expenses, and permitting small businesses to pool risk.
Opponents of ObamaCare have decisively won the battle for public opinion. As voters start to feel the pain of this new program, Republicans will be in a stronger position if they stay in the fight, make a principled case, and lay out a competing vision.
Mr. Rove, the former senior adviser and deputy chief of staff to President George W. Bush, is the author of "Courage and Consequence," published this month by Threshold Editions.