HERE IS HOW TO AVOID BEING GORED BY A RINO 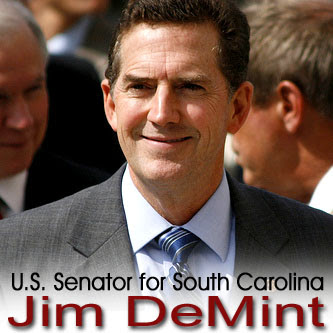 Where Little Conservative Senators Come From

No one in Washington has done more to shake up the political establishment over the past twelve months than U.S. Senator Jim DeMint.
Mr. DeMint's Senate Conservatives Fund won another big victory on Saturday, when Mike Lee finished with the most delegate votes at the Utah GOP convention, making him the frontrunner for the Senate seat now held by Republican Bob Bennett. We hear that Mr. DeMint's video-taped endorsement of Mr. Lee gained the biggest applause of the day in Utah -- winning a more enthusiastic response than Mitt Romney's own endorsement of the ill-fated Mr. Bennett (Mr. Romney was booed).
In mobilizing his supporters to intervene in other races, Mr. DeMint has not troubled himself to observe the clubby verities of the senate. He was one of the first elected Republicans to endorse Marco Rubio over party favorite Charlie Crist. "We endorsed Rubio before it was cool," says DeMint advisor Matt Hoskins.
Mr. DeMint also has been one of the staunchest supporters of Pat Toomey in Pennsylvania, endorsing Mr. Toomey over then-Republican incumbent Arlen Specter, who read the writing on the wall and switched to the Democrats. Mr. DeMint's willingness to go against Senate collegiality is paying off: Mr. Toomey appears well-positioned to pick up the seat for Republicans no matter who wins next week's Democratic primary between Mr. Specter and Rep. Joe Sestak.
The Conservative Fund also hopes for a big victory in Kentucky, where Rand Paul may upset Trey Grayson, the establishment GOP choice to replace retiring Senator Jim Bunning. Mr. DeMint also endorsed Chuck DeVore over GOP establishment darling Carly Fiorina in the California Senate race. And he's backing another dark horse, Weld County District Attorney Ken Buck, against Lieutenant Governor Jane Norton for the right to challenge Colorado Democrat Mike Bennet.
The Fund has raised more than $1 million this year for conservative favorites, making it one of the most effective Republican PACs in the country. "Most of our donations are $25 to $50 and most of it comes in over the Internet," says Mr. Hoskins.
"I started this Fund because I kept looking around the Senate and saw so few Republicans like me," Mr. DeMint told me when he first launched the PAC last year. "People like Tom Coburn [the Republican Senator from Oklahoma] and I need reinforcements in the battle in Washington for conservative ideas and reforms. We were getting lonely."
Thanks to Mr. DeMint, the Senate in 2011 will be not just more Republican, but also more conservative.
-- Stephen Moore
THE WALL STREET JOURNAL ONLINE
POLITICAL DIARY
11 May 10

A viewer of this Blog sent me an email with this comment which I feel is deserving of being addded to this post:

"Great Blog you have there sir! A correction is in order however to your post: http://thehuffingtonriposte.blogspot.com/2010/05/here-is-how-to-avoid-being-gored-by.html
Mike Lee did NOT "finish[ed] with the most delegate votes at the Utah GOP convention"--actually a millionaire business owner by the name of Tim Bridgewater did. Here are the actual results from the third and final round of voting: http://blog.utgop.org/sites/2010/05/senate-race-round-3-results/ Lee did finish with the most votes in round 1, but since Lee is headed to a primary against Bridgewater people primarily look to the final round as an early indicator of who starts out with the lead headed into the primary. Although there has been no polling of the two candidates head-to-head since Saturday's primary, most would say that Lee is going to have his hands full going up against Bridgewater.
DeMint is one of my most favorite Senators--like 10x better than Grahamnesty--but the way Lee used the video in the convention seemed to rub people the wrong way. It seemed like an outsider trying to tell Utahns how to vote and the people at the convention tend to be extremely well read and prepared. No way did the DeMint video "get the most applause" in the convention; I know: I watched and tweeted the convention live. In fact, reporters felt Lee had one speech particularly awful and negative compared to his usual campaigning. I can provide sources if you don't believe me. I'm not trying to knock Lee and am grateful for Lee's efforts in helping to bag RINO Bennett; it just sounds like maybe you relied too heavily on convention talking points from the Lee campaign which may have stretched the truth or created a false impression. The talk here isn't how impressive Lee was during the convention but rather how poorly he did: so bad that Bridgewater almost walked away from the convention with the GOP nomination (Bridgewater got 57%, at 60% Bridgewater would have been the declared candiate and there would then have been no Lee nor primary).
Personally, I haven't decided between Bridgewater and Lee whom I will vote for on June 22nd because there are things I like about both and concerns I have about both. There was a great conservative candidate Erick Erickson of RedState.com was supportive of early on (before he switched to Lee) named Cherilyn Eagar that I feel would have been the best choice but she didn't advance in the convention like Lee and Bridgewater. I say this again, to evidence to you that I have no vested interest in knocking Lee but rather to promote the truth however it presents itself."

SCF is a political action committee dedicated to electing strong conservatives to the United States Senate. We do not support liberal Republicans and we are not affiliated with the Republican Party or any of its campaign committees.

SCF seeks to bring bold conservative leadership to Washington by supporting only the most principled candidates nationwide -- candidates who believe in the timeless conservative principles of limited government, strong national defense, and traditional family values.

Our ultimate goal is to maximize freedom, security, and prosperity through conservative policies.

We do it through direct contributions to candidates, bundled contributions from donors across the country, and voter education on key issues.


SCF members come from every state and from all walks of life. They love America and don't want to see big government policies weaken it. They have decided to take positive action to take back their country. SCF is chaired by U.S. Sen. Jim DeMint (R-South Carolina).

SCF has contributed, raised, bundled, or spent $622,910.74 supporting candidates in the 2010 election cycle. Here are the totals for our 4 featured candidates:

SCF has over 200,000 members nationwide and is in a strong position to support conservative candidates in 2010.

Contributed = Direct PAC contributions to a candidate's campaign. Federal law limits PACs to $5,000 per candidates, per election ($10,000 maximum for primary and general elections).