CHICKEN LITTLE OF SKYFALL SAYS THE SKY IS NOT FALLING 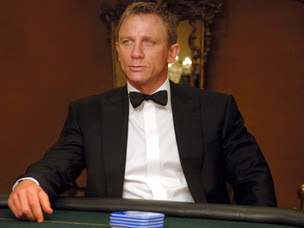 For some reason, the quadrennial humiliation of the Republican presidential candidate now coincides with the release of the new Bond movie. Don't ask me why; probably a constitutional amendment I missed along the way. Last time round, Kevin Sessums interviewed Daniel Craig and, as a final question, asked which presidential nominee would make the better 007:


Craig doesn't hesitate. "Obama would be the better Bond because — if he's true to his word — he'd be willing to quite literally look the enemy in the eye and go toe to toe with them. McCain, because of his long service and experience, would probably be a better M," he adds, mentioning Bond's boss, played by Dame Judi Dench. "There is, come to think of it, a kind of Judi Dench quality to McCain."


A few readers may recall my response in this very space four years ago:


Oh, great. John McCain has survived plane crashes, just like Roger Moore in Octopussy. He has escaped death in shipboard infernos, just like Sean Connery in Thunderball. He has endured torture day after day, month after month, without end, just like Pierce Brosnan in the title sequence of Die Another Day. He has done everything 007 has done except get lowered into a shark tank and (as far as we know) bed Britt Ekland and Jill St. John.


And yet Daniel Craig gives him the desk job.
McCain is what an action hero looks like — unkempt, scarred, maimed, unable (thanks to the Vietnamese) to raise his hands above his head to brush his hair. But Obama is what an action hero looks like to a movie producer — cool, fashionable, neither shaken nor stirred, a man who looks as if he's never broken a sweat in his life. In Daniel Craig's world, Obama's glamour trumped McCain's scar tissue — as it did for the electorate.


I thought it might go differently this time. In 2008, Craig was promoting Quantum of Solace, which seemed about right: Yeah, it was a grim night for Republicans, but Bush was unpopular and Americans were war-weary and the global economy had nosedived off the cliff. Four years on, Craig's back promoting Skyfall, and, alas, that seems about right, too. There's no solace: The sky fell in. Mitt did bad, and the Republican party did worse. And worse is to come, if the reactions of the "experts" are any indication: On the one hand, the GOP needs to junk all that uptight social-conservative stuff. On the other, they need to reach out to demographically surging Hispanics because they're natural social conservatives. Whatever. Meanwhile, Barack Obama gets another four years to "quite literally look the enemy in the eye and go toe to toe with them," which is not how surviving consulate staff in Benghazi would recall it.


To state the obvious: The whole Republican election campaign — the primaries, the debates, the genius consultants, the billion dollars on robocalls and attack ads — was a complete waste of time. I doubt the final tally in the Electoral College would have been any different had the entire GOP gone to the Bahamas for the last 18 months and sent a billion-dollar check to some favored Third World charity. And in the long run they might have done rather better had they used the dough to start a movie studio or buy a TV network.


Republican "strategists" remind me of those scientists and detectives who stand around looking baffled in the mysterious indentation of ground at the start of a Godzilla movie. Then the camera pulls back and you realize the shallow trench is really a giant footprint. The GOP slogged out the election in the little toe of politics unaware that they were about to be stomped by the Democrat monster of the broader culture. For much of the electorate, politics is now tribal. I don't just mean the 93 percent of blacks and 71 percent of Hispanics who voted for Obama, but various other demographic niches, from impoverished single women to upscale gays. If you know whether someone's black or lesbian or a college professor, you can guess how they vote and be right nine times out of ten. They are beyond questions of economic or foreign policy: Their self-identification trumps politics. Sociocultural identifiers count for more than the failure of the stimulus or a cover-up in Benghazi. Just as Obama fits Daniel Craig's idea of an action hero, so he fits these voters' idea of a president, and Mitt Romney doesn't.


Are you so sure it'll go differently next time with Ryan or Rubio? Republicans have spent the last half-century surrendering all the cultural space in which Americans actually live in the 729 days between elections. Yes, yes, I know; I said exactly the same thing here four years ago:

Which is why the 2010 GOP House made so little difference. "We have to get back in the game in all the arenas we've ceded to liberalism," I wrote in 2008. "Otherwise, as in Daniel Craig's improvised casting call, we'll be lucky to wind up with a cameo in the national narrative."
Contemplating the enacting of Obamacare, the next two or three Supreme Court appointments, the "flexibility" promised to Putin re the post-American order, the remorseless expansion of debt and dependency, that's kind of the way it feels, doesn't it? Like I said, get back in the game — or 2016 will just be the umpteenth GOP remake of Die Another Day.