It isn't that he opposes U.S. intervention. It's that somehow he often ends up backing the bad guys.

With Susan Rice withdrawing her name for U.S. secretary of state, President Obama last week nominated Massachusetts Sen. John Kerry for the job. Don't expect applause from beleaguered democrats south of the border.
Mr. Kerry's record of promoting American values abroad is dismal. It isn't that he opposes U.S. intervention—far from it. The trouble is that he has a habit of intervening on behalf of bad guys. A left-wing world view and an earnest conviction that it is his destiny to impose it on others may make him a perfect fit in the Obama cabinet. But it won't be good for poor countries or for U.S. interests. 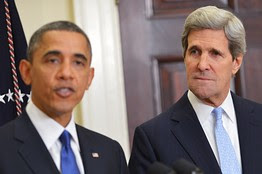 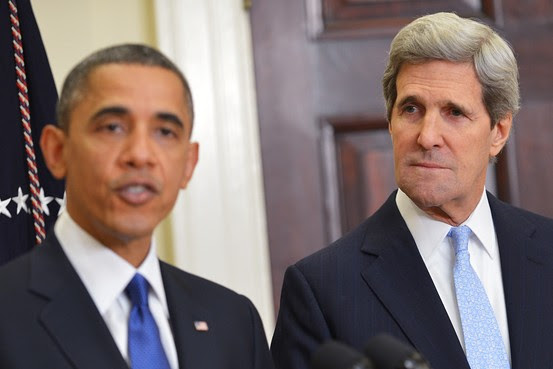 US Senator John Kerry D-MA (R) watches as US President Barack Obama announces Kerry as his choice for the next secretary of state on December 21, 2012 in the Roosevelt Room of the White House in Washington, DC

Latin America knows all too well the dangerous combination of Mr. Kerry's arrogance and, to be polite, let's say, naiveté. In 1985, in the midst of the Cold War, he led a congressional delegation to Nicaragua, where he met with Sandinista comandante Daniel Ortega. The Sandinista reputation as a human-rights violator was already well-established, and the Soviets were stalking Central America. Nevertheless, Mr. Kerry came back from Managua advocating an end to U.S. support for the resistance known as the "Contras." The House took his advice and voted down a $14 million aid package to them. The next day Mr. Ortega flew to Moscow to get $200 million in support from the Kremlin.

Searching for the truth requires humility, which may explain why Mr. Kerry was so dangerously uninformed. Years later, the writer Paul Berman exposed the realities of Sandinista oppression with "In Search of Ben Linder's Killers" (The New Yorker, Sept. 23, 1996). Mr. Berman went into the Nicaraguan highlands to learn how the Sandinista sympathizer from Oregon had died. In the process he also learned about the peasant rebellion against the Sandinistas. 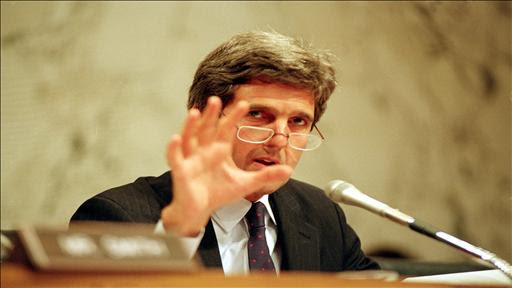 Highland peasants had joined Marxist intellectuals calling themselves Sandinistas to overthrow dictator Anastasio Somoza, only to find themselves slaves of a new master in the 1980s. "Women from the poorest families balanced canastas filled with fruit or grains on their heads and went to market, exactly as they always had and the Sandinista police raided the buses and arrested the women as speculators." Locals "felt that they were losing control over their products, their freedom of action and their land." The pushback wasn't only from large landowners. "The smaller the patch, the more fiercely they clung to it."

Sandinista-backer Fidel Castro sent Cubans to help. "Almost instantly" Mr. Berman wrote, "a blazing hatred for the Cubans—known as Russians to the people who despised them—swept through the northern and eastern countryside." The peasants "came to a horrifying conclusion: that the Sandinista National Liberation Front was a political movement that was devoted to contempt of God and theft of land; a movement that called itself Nicaraguan but was actively trying to turn the country over to foreigners; a movement that claimed to be for the peasants and the poor but was actually their most implacable enemy."

Linder was killed, Mr. Berman was told by a highland local whose unit was involved, by the Contras because he was thought to be a Cuban.

It is still not clear whether Mr. Kerry realizes he was flacking for jackboots. Let's assume that he was merely a sucker who fell for Soviet and Cuban propaganda. Does a similar knowledge deficiency explain why, when he ran for president in 2004, he told a Boston audience that the Colombian guerrillas, famous for killing and maiming civilians, "have legitimate complaints"?

In June 2009, Mr. Kerry again went to bat for the dark side, this time in Honduras. President Manuel Zelaya, an ally of Hugo Chávez, had been unconstitutionally trying to extend his time in office. The Honduran Supreme Court ordered the military to arrest him. All the other branches of government, the Catholic Church, Honduras's human-rights ombudsman and Mr. Zelaya's own party backed the court's decision.

Mr. Chávez, Fidel Castro and the Obama administration became furious, called it a "coup d'état" and moved to isolate the tiny country. When Sen. Jim DeMint (R., S.C.) planned a fact-finding trip to Tegucigalpa, Mr. Kerry's office tried to stop him by blocking funding. When the Law Library of Congress concluded that the Honduran high court had acted legally, Mr. Kerry wrote to the head of the library demanding that the opinion be retracted and "corrected." In the spring of 2010, a Kerry staffer traveled to Honduras to pressure officials there to adopt the Obama administration's "coup" narrative.

It is also worth recalling that Mr. Kerry's running mate in 2004, John Edwards, promised to force the renegotiation of the North American Free Trade Agreement if the Kerry-Edwards ticket won the White House.

There's a pattern here and it features Mr. Kerry continually on the wrong side of history. Asking Americans to believe that he will be any different as secretary of state is asking them to suspend disbelief.

A version of this article appeared December 24, 2012, on page A11 in the U.S. edition of The Wall Street Journal, with the headline: John Kerry's Record in Latin America.
Posted by Leo Rugiens at 2:59 PM