KERRY AND HAGEL WOULD MEAN A MILITARILY WEAKER AMERICA


A Flock of Doves

With Kerry at State, Hagel at Defense would be dangerous.

President Obama began to unveil his second-term national security team on Friday, choosing John Kerry as the next Secretary of State. The Massachusetts Senator shares the President's view of diminished American power and influence, which should only compound skepticism about the mooted selection of Chuck Hagel to lead the Pentagon.


Mr. Obama has found his mirror-image in Mr. Kerry, who for 30 years has been one of the Democratic Party's leading doves. The Senator's antiwar activism after Vietnam is well known and may have cost him the Presidency in 2004. But that shouldn't bar him from State, where his job will be diplomacy at the behest of the President. 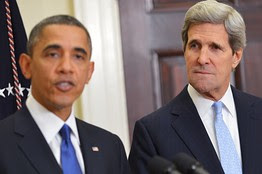 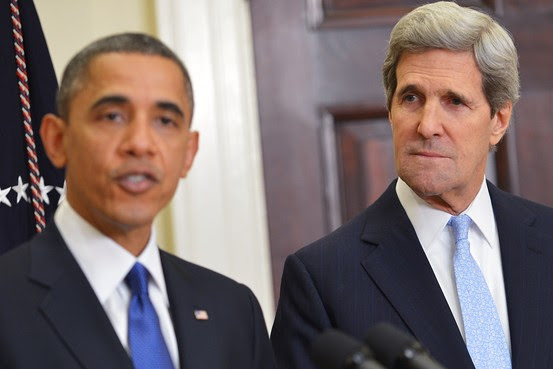 
The bigger question is how much fortitude Mr. Kerry will show in pursuing U.S. interests. His instincts have typically been to oppose the use of American force abroad and to engage adversaries as if they share our own peaceful goals. Like Joe Biden, he resisted Ronald Reagan's policies that ended the Cold War, opposed the Gulf War in 1990, supported the Iraq war but then changed his mind, and opposed the 2007 surge that salvaged Iraq.


In his remarks Friday, Mr. Obama said Mr. Kerry's "entire life has prepared him for this role," which is true, if not always reassuring. He has traveled widely and knows many world leaders personally. In the 1990s, he helped open diplomatic relations with Hanoi and more recently has worked difficult portfolios in Sudan, Afghanistan, Pakistan and Syria.


But the case of Syria reveals the limitations of his worldview. In 2008 when anti-Bush antipathy was at its height, he called for "engagement" with dictator Bashar Assad. A year later he and his wife dined out in Damascus with the Assads. In April 2010, he called Syria "an essential player in bringing peace and stability to the region." He has since changed his mind and denounced Mr. Assad, but he'll have to be tougher-minded to succeed at State.


Which brings us to Mr. Hagel, whom the White House has leaked as a possible Defense Secretary. The idea seems to be that the former GOP Senator from Nebraska would bring a bipartisan note to foreign policy, but that logic usually applies when the choice shares the other party's views. Though he fought admirably in Vietnam (and has two Purple Hearts), Mr. Hagel's security views have more closely resembled a George McGovern strain of Republicanism.


In the Senate, Mr. Hagel steered more to foreign policy than defense issues, and on those he steered left. "Politically, who among us is going to stand up and defend Iran or Libya?" he told the Senate in June 2001. He proceeded to defend both, calling sanctions against the Tehran and Gadhafi regimes "an absolute charade," "ill-considered" and "breaching the spirit of multilateralism so necessary to achieve success."


The biggest question for the next Defense chief may be what to do about Iran, but Mr. Hagel has never worried much about its nuclear ambitions. In a 2008 speech, he said the U.S. needs to offer Iran "some kind of security guarantee" to get its help in striking an Israel-Palestinian peace deal. His ideas for "some easy to do breakthroughs" with Tehran included opening a diplomatic post or restoring commercial flights—without preconditions. He opposed sanctions on Tehran in 2004, 2007 and 2008.


These views might be acceptable in a Secretary of State, but they are troubling at the Pentagon in an Administration that lacks hawkish voices in general. In the first term, Hillary Clinton, Robert Gates and David Petraeus provided a counterweight to Mr. Obama's natural instincts to avoid U.S. leadership. Mr. Hagel is to the left of Mr. Kerry.


In the months after 9/11, he warned of "a dangerous arrogance and a sort of 'Pax Americana' vision, which holds that we are more powerful, richer, and smarter than the rest of the world."


His neo-isolationism became more urgent in the last decade, noting that the U.S. could do little good in Egypt or the Middle East in general. "I think we've got to be very wise and careful on this and continue to work with the multilateral institutions in the lead in Syria," he told Foreign Policy in May. He wanted the U.S. to engage Mr. Assad in 2008, but not to intervene to stop the Syrian dictator from killing his own people.


On military issues, the former Senator has been a notable critic of missile defenses and he wanted to halt their development as long as Russia is opposed. This is no small matter because Vladimir Putin wants to use arms-control talks to curtail U.S. missile defenses in the next four years.


Mr. Hagel supported the decision to oust Saddam Hussein but later became a critic and in 2007 he opposed the troop surge that saved the U.S. from defeat. Mr. Hagel called the surge proposal "the most dangerous foreign policy blunder in this country since Vietnam, if it's carried out." The surge stopped the sectarian bloodletting and enabled the U.S. drawdown.


By far the biggest risk is the role Mr. Hagel might play on military spending. Gutting the Pentagon has been a liberal goal since the 1960s, and Mr. Obama will have a new opening given the budget crisis. Mr. Gates and current Pentagon chief Leon Panetta have followed the President's orders but have resisted when the White House wanted to go too far. Mr. Gates made a special point of warning Americans not to repeat our frequent mistake of winding down the military when wars end. We regret it as new threats emerge.


Now is an especially dangerous moment, after a decade of wearing out ships and planes built as part of the Reagan buildup. A legitimate fear is that Mr. Obama wants Mr. Hagel, with his military record and GOP pedigree, to provide the political cover to shrink the Pentagon so he can finance ObamaCare and other entitlements.


Mr. Obama can do better than Mr. Hagel—for example, by choosing former Defense Under Secretary Michele Flournoy, or perhaps Colin Powell. If he does nominate Mr. Hagel, the Senate will have to prevent the Administration's senior security ranks from being dominated by a flock of doves who think the world is better off with a militarily weaker America.

A version of this article appeared December 22, 2012, on page A16 in the U.S. edition of The Wall Street Journal, with the headline: A Flock of Doves.
Posted by Leo Rugiens at 6:49 AM