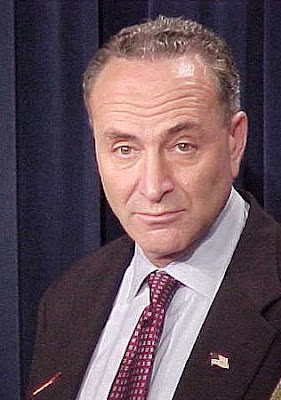 Hagel Should Be the Red Line for Pro-Israel Dems

Senator Chuck Schumer hasn’t publicly taken a side in the Chuck Hagel debate yet, but as Politico reports, his final decision could tip the scales:

Schumer, the most powerful Jewish Democrat in Congress, has been noncommittal in his public statements on Hagel’s nomination. But privately, several sources say he has told senators it would be “very hard” for him to support Hagel as the next defense secretary because of his positions on Israel over the years. In New York, Schumer has told allies and power brokers in the Jewish community that he’s uneasy about Hagel’s nomination, a concern he reiterated at a private breakfast in Manhattan’s posh Park Avenue Winter restaurant on Wednesday.
If Schumer were to oppose Hagel, it would almost certainly amount to a fatal blow to his candidacy since a number of pro-Israel Democrats who are squeamish about the nominee could very well be influenced by the No. 3 Democrat’s position. It would also give bipartisan political cover to Republicans and neocons fighting Hagel’s nomination.
Still, Schumer could also provide critical support for Hagel’s nomination. Should he support Hagel, it very likely would ride on what the former Nebraska GOP senator eventually says on Israel at an upcoming one-on-one meeting with the New York Democrat and during his confirmation hearings before the Senate Armed Services Committee. Schumer declined to be interviewed Thursday for this story. The White House also declined to comment.


It’s hard to overstate Schumer’s power in this debate. Pro-Israel Senate Democrats who aren’t getting much guidance on this issue from AIPAC (at least not officially) will look to Schumer for cues. This is particularly important in the case of his fellow New York Senator, Kirstin Gillibrand, whose vote on the Armed Services Committee could be the deciding factor in whether Hagel’s nomination is referred to the floor.

But If Schumer backs him, it would essentially give Hagel’s views the kosher seal of approval, letting the White House claim that any criticism of his Israel record is a faux controversy drummed up by the GOP. Politically, Schumer probably has an interest in doing this: the White House would owe him a major favor, and he’d be able to dodge a high-profile fight he has a real possibility of losing.
Pro-Israel Democrats should ask themselves this. How did they get to a point where the leader of their party is nominating one of the most anti-Israel senators who ever walked the halls of the Capitol–a man who routinely made the anti-Semitic Washington Report of Middle East Affairs’ annual Congressional Hall of Fame list?

The party is shifting around them. The ranks of the pro-Israel Democrats in Congress are shrinking. Representatives Rothman, Frank, Berman, Ackerman, Weiner, and Senator Joe Lieberman are gone. The advocacy groups and think tanks incubating the next generation of Democratic leaders are increasingly moving against Israel.

There is still a strong up-and-coming generation of pro-Israel Democrats. But they have fewer leaders to look to and fewer roles to fill in the party. If people like Schumer won’t stand up against Hagel, what message would this send to these young activists and operatives working in the trenches? That they should either change their opinions or their party affiliation?

Hagel is the red line. He is the most anti-Israel defense secretary nominee in memory, chosen at a time when Iran is on the verge of nuclear weapons capability. If pro-Israel Democrats cave on his confirmation, what would they possibly stand against?