THE EDUCATION OF JOHN BOEHNER BY BARACK HUSSEIN OBAMA

The Education of John Boehner

Leverage for the next clash: GOP willingness to let the spending sequester take effect.


What stunned House Speaker John Boehner more than anything else during his prolonged closed-door budget negotiations with Barack Obama was this revelation: "At one point several weeks ago," Mr. Boehner says, "the president said to me, 'We don't have a spending problem.' "


I am talking to Mr. Boehner in his office on the second floor of the Capitol, 72 hours after the historic House vote to take America off the so-called fiscal cliff by making permanent the Bush tax cuts on most Americans, but also to raise taxes on high earners. In the interim, Mr. Boehner had been elected to serve his second term as speaker of the House. Throughout our hourlong conversation, as is his custom, he takes long drags on one cigarette after another.


Mr. Boehner looks battle weary from five weeks of grappling with the White House. He's frustrated that the final deal failed to make progress toward his primary goal of "making a down payment on solving the debt crisis and setting a path to get real entitlement reform." At one point he grimly says: "I need this job like I need a hole in the head."


The president's insistence that Washington doesn't have a spending problem, Mr. Boehner says, is predicated on the belief that massive federal deficits stem from what Mr. Obama called "a health-care problem." Mr. Boehner says that after he recovered from his astonishment—"They blame all of the fiscal woes on our health-care system"—he replied: "Clearly we have a health-care problem, which is about to get worse with ObamaCare. But, Mr. President, we have a very serious spending problem." He repeated this message so often, he says, that toward the end of the negotiations, the president became irritated and said: "I'm getting tired of hearing you say that."


With the two sides so far from agreeing even on the nature of the country's fiscal challenge, making progress on how to address it was difficult. Mr. Boehner became so agitated with the lack of progress that he cursed at Senate Majority Leader Harry Reid. "Those days after Christmas," he explains, "I was in Ohio, and Harry's on the Senate floor calling me a dictator and all kinds of nasty things. You know, I don't lose my temper. I never do. But I was shocked at what Harry was saying about me. I came back to town. Saw Harry at the White House. And that was when that was said," he says, referring to a pointed "go [blank] yourself" addressed to Mr. Reid. 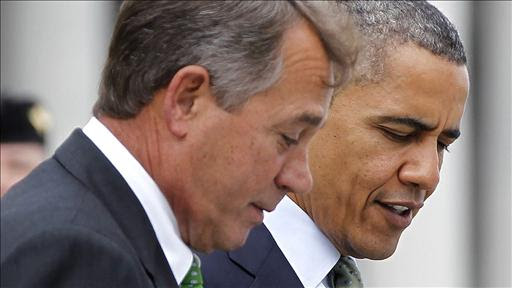 Editorial board member Steve Moore on his interview with Speaker John Boehner and President Obama's denial that Washington has a spending problem. Photo credit: Associate Press.

Mr. Boehner confirms that at one critical juncture he asked Mr. Obama, after conceding on $800 billion in new taxes, "What am I getting?" and the president replied: "You don't get anything for it. I'm taking that anyway."


Why has the president been such an immovable force when it comes to cutting spending? "Two reasons," Mr. Boehner says. "He's so ideological himself, and he's unwilling to take on the left wing of his own party." That reluctance explains why Mr. Obama originally agreed with the Boehner proposal to raise the retirement age for Medicare, the speaker says, but then "pulled back. He admitted in meetings that he couldn't sell things to his own members. But he didn't even want to try."


Mr. Boehner is frustrated that Republicans were portrayed by the press as dogmatic and unyielding in these talks. "I'm the guy who put revenues on the table the day after the election," he says. "And I'm the guy who put the [income] threshold at a million dollars. Then we agreed to let the rates go up, on dividends, capital gains as a way of trying to move them into a deal. . . . But we could never get him to step up," Mr. Boehner says with a shrug. Negotiations with the White House ended in stalemate when "it became painfully obvious that the president won't cut spending."


Once the talks broke down, the eventual scaled-back deal with no spending cuts was brokered by Vice President Joe Biden and Senate Minority Leader Mitch McConnell, with Mr. Boehner on the sidelines. He says that after the tax package passed the Senate, the House Republican caucus debated two alternatives. One was to amend the Senate bill by attaching spending cuts, and the other was to vote up or down on the Senate bill.


"We were already off the cliff," he says of the rushed Jan. 1 vote, and he feared that a no vote would do "serious damage to the economy." He denies twisting arms to win passage. Even though a majority of Republicans voted no, and he took flak from conservative groups as a sellout, "in the end, most of our members wanted this to pass, but they didn't want to vote for it."


In hindsight, what does he think was his biggest strategic mistake? "What I should have done the day after the election was to come out and say: The House has done its work. The House passed a bill that replaced the sequester with real spending cuts. The House passed a plan extending all of the current tax rates. We passed a budget. We call upon the Senate to do their work."


The left has been crowing that it walked away with the crown jewels and forced Republicans to cave on their "no new taxes" principle. Mr. Boehner sees things differently: "The law of the land was that all of the rates were going up January 1, period. So the question was, were we going to cut taxes by $3.7 trillion."


He's no cheerleader for the final deal—he derides the special-interest corporate-tax provisions as containing "an awful lot of garbage" and grouses about "extending unemployment without further reforms"—but he defends it as the best bad outcome that could have been expected: "Who would have ever guessed that we could make 99% of the Bush tax cuts permanent? When we had a Republican House and Senate and a Republican in the White House, we couldn't get that. And so, not bad."


Where does the fiscal debate go from here? The speaker is adamant on two points: First, Republicans won't be agreeing to any more tax increases during the next two years. "The tax issue is resolved," he says, and it will be discussed only in the context of a broader debate about tax reform—specifically, lower rates. He dismisses the president's declaration that any future budget cuts will have to be "balanced" with more tax hikes.


Second, Mr. Boehner says he won't engage in any more closed-door budget negotiations with the White House, which are "futile." He adds: "Sure, I will meet with the president if he wants to," but House Republicans will from now on proceed with establishing a budget for the year following what is known as "regular order," and they will insist that Harry Reid and Senate Democrats pass a budget—something they haven't done in nearly four years—before proceeding.

The real showdown will be on the debt ceiling and the spending sequester in March. I ask Mr. Boehner if he will take the debt-ceiling talks to the brink—risking a government shutdown and debt downgrade from the credit agencies—given that it didn't work in 2011 and President Obama has said he won't bargain on the matter.


The debt bill is "one point of leverage," Mr. Boehner says, but he also hedges, noting that it is "not the ultimate leverage." He says that Republicans won't back down from the so-called Boehner rule: that every dollar of raising the debt ceiling will require one dollar of spending cuts over the next 10 years. Rather than forcing a deal, the insistence may result in a series of monthly debt-ceiling increases. 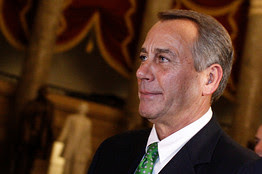 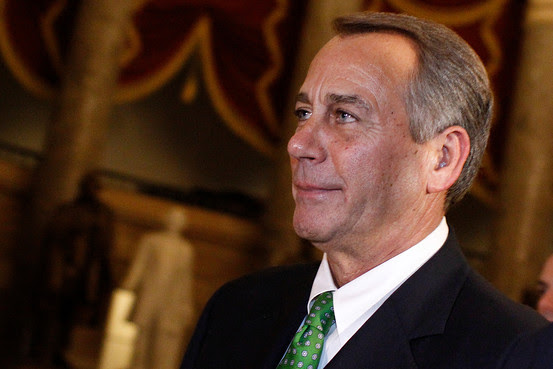 Agence France-Presse/Getty Images
The speaker of the House on his way to the budget vote, Jan. 1.

The Republicans' stronger card, Mr. Boehner believes, will be the automatic spending sequester trigger that trims all discretionary programs—defense and domestic. It now appears that the president made a severe political miscalculation when he came up with the sequester idea in 2011.
As Mr. Boehner tells the story: Mr. Obama was sure Republicans would call for ending the sequester—the other "cliff"—because it included deep defense cuts. But Republicans never raised the issue. "It wasn't until literally last week that the White House brought up replacing the sequester," Mr. Boehner says. "They said, 'We can't have the sequester.' They were always counting on us to bring this to the table."


Mr. Boehner says he has significant Republican support, including GOP defense hawks, on his side for letting the sequester do its work. "I got that in my back pocket," the speaker says. He is counting on the president's liberal base putting pressure on him when cherished domestic programs face the sequester's sharp knife. Republican willingness to support the sequester, Mr. Boehner says, is "as much leverage as we're going to get."


That leverage, he reasons, is what will force Democrats to the table on entitlements. "Think of it this way. We already have an agreement [capping] discretionary spending for 10 years. And we're already in our second year of it. This whole discussion on the budget over the next several months is going to be about these entitlements."


Given the bruising of the past several weeks, Mr. Boehner is surprisingly optimistic about getting a deal done on corporate and personal income-tax reform. "The president understands the need for tax reform," he says. "The president admitted . . . in the first meeting that we needed to do tax reform, and he was for a tax reform process that would lower rates."


Mr. Boehner sees Republicans with two goals: lowering tax rates and closing loopholes, as happened in 1986, and equalizing tax rates between small businesses and large corporations. His optimism that Democrats will agree to that framework seems Pollyannish since they are now advocating closing loopholes to raise revenues—without lowering rates.


The driving passion for Mr. Boehner in these fiscal debates is his conviction that trillion-dollar deficits are sapping the country of its energy and prosperity. When I ask him when the impact of this debt will start to be felt, he says: "It's already here today. It's killing our economy. It's causing investors to sit on their cash. They're afraid to invest. It's a wet blanket on top of our economy."
He sees debt as almost a moral failing, noting that when he grew up in a "little middle-class, blue-collar neighborhood" outside of Cincinnati, "nobody had debt. It was unheard of. I just don't do debt."


Mr. Boehner says that the only way to build long-term economic growth is to reduce the nation's debt through entitlement and tax reform. But can such a deal be achieved with a president who doesn't even think that Washington has a spending problem? "He believes in the power of government," Mr. Boehner answers. "I believe in the power of the American people. It is really that simple." And really that difficult.

Mr. Moore is a member of the Journal's editorial board.

A version of this article appeared January 7, 2013, on page A13 in the U.S. edition of The Wall Street Journal, with the headline: The Education of John Boehner.
Posted by Leo Rugiens at 10:59 AM