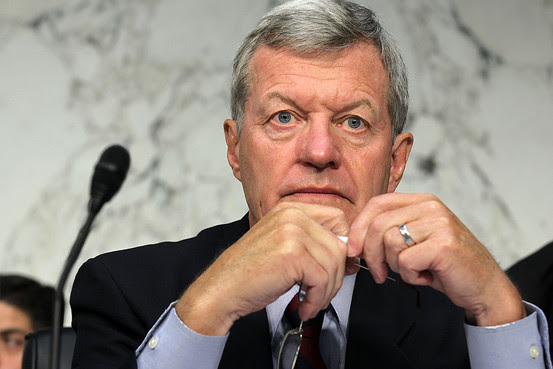 
Crony Capitalist Blowout
A tax increase for everyone but the favored wealthy few.


In praising Congress's huge new tax increase, President Obama said Tuesday that "millionaires and billionaires" will finally "pay their fair share." That is, unless you are a Nascar track owner, a wind-energy company or the owners of StarKist Tuna, among many others who managed to get their taxes reduced in Congress's New Year celebration.  There's plenty to lament about the capital and income tax hikes, but the bill's seedier underside is the $40 billion or so in tax payoffs to every crony capitalist and special pleader with a lobbyist worth his million-dollar salary. Congress and the White House want everyone to ignore this corporate-welfare blowout, so allow us to shine a light on the merriment.

There's plenty to lament about the capital and income tax hikes, but the bill's seedier underside is the $40 billion or so in tax payoffs to every crony capitalist and special pleader with a lobbyist worth his million-dollar salary. Congress and the White House want everyone to ignore this corporate-welfare blowout, so allow us to shine a light on the merriment.


Senate Finance Chairman Max Baucus got the party started this summer when he said he would subject 75 special-interest tax breaks to a "tax reform" review. That was pretty funny. Nearly every attempt by Tom Coburn (R., Okla.) and others to pare back the list was defeated in a bipartisan rout.


The Senators even voted down, 14-10, an amendment to list the corporate interests that receive tax perks on a government website. This "tax extenders" bill passed Mr. Baucus's committee, 19-5 (see the table nearby), and then sat waiting until Harry Reid and the White House stuffed it wholesale into the "fiscal cliff" bill.


Distillers are able to drink to a $222 million rum tax rebate. Perhaps this will help to finance more of those fabulous Bacardi TV ads with all those beautiful rich people. Businesses located on Indian reservations will receive $222 million in accelerated depreciation. And there are breaks for railroads, "New York Liberty Zone" bonds and so much more.


But a special award goes to Chris Dodd, the former Senator who now roams Gucci Gulch lobbying for Hollywood's movie studios. The Senate summary of his tax victory is worth quoting in full: "The bill extends for two years, through 2013, the provision that allows film and television producers to expense the first $15 million of production costs incurred in the United States ($20 million if the costs are incurred in economically depressed areas in the United States)."

You gotta love that "depressed areas" bit. The impoverished impresarios of Brentwood get an extra writeoff if they take their film crews into, say, deepest Flatbush. Is that because they have to pay extra to the caterers from Dean & DeLuca to make the trip? It sure can't be because they hire the jobless locals for the production crew. Those are union jobs, mate, and don't you forget it.


The Joint Tax Committee says this Hollywood special will cost the Treasury a mere $248 million over 10 years, but over fiscal years 2013 and 2014 the cost is really $430 million because it is supposed to expire at the end of this year. In reality Mr. Dodd will wrangle another extension next year, and the year after that, and . . . . Investing a couple million in Mr. Dodd in return for $430 million in tax breaks sure beats trying to make better movies.


Then there are the green-energy giveaways that are also quickly becoming entitlements. The wind production tax credit got another one-year reprieve, thanks to Mr. Obama and GOP Senators John Thune (South Dakota) and Chuck Grassley (Iowa). This freebie for the likes of the neediest at General Electric GE -0.61% and Siemens SIE.XE +0.07% —which benefit indirectly by making wind turbine gear—is now 20 years old. Cost to taxpayers: $12 billion. 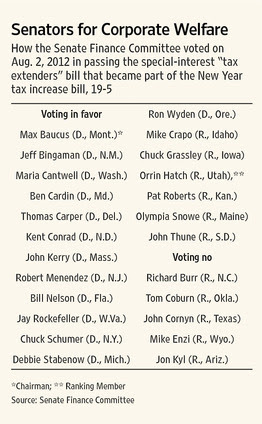 Cellulosic biofuels—the great white whale of renewable energy—also had their tax credit continued, and the definition of what qualifies was expanded to include producers of "algae-based fuel" ($59 million.) Speaking of sludge, biodiesel and "renewable diesel" will continue receiving their $1 per gallon tax credit ($2.2 billion). The U.S. is experiencing a natural gas and oil drilling boom, but Congress still thinks algae and wind will power the future.


The great joke here is that Washington pretends to want to pass "comprehensive tax reform," even as each year it adds more tax giveaways that distort the tax code and keep tax rates higher than they have to be. Even as he praised the bill full of this stuff, Mr. Obama called Tuesday night for "further reforms to our tax code so that the wealthiest corporations and individuals can't take advantage of loopholes and deductions that aren't available to most Americans."


One of Mr. Obama's political gifts is that he can sound so plausible describing the opposite of his real intentions.


The costs of all this are far greater than the estimates conjured by the Joint Tax Committee. They include slower economic growth from misallocated capital, lower revenues for the Treasury and thus more pressure to raise rates on everyone, and greater public cynicism that government mainly serves the powerful.


Republicans who are looking for a new populist message have one waiting here, and they could start by repudiating the corporate welfare in this New Year disgrace.

A version of this article appeared January 2, 2013, on page A12 in the U.S. edition of The Wall Street Journal, with the headline: Crony Capitalist Blowout.
Posted by Leo Rugiens at 9:33 AM