DON'T BELIEVE LIBERALS THAT FASCISM IS COMING TO AMERICA FROM THE RIGHT, IT IS COMING FROM THE LEFT, FROM THE OBAMA SUPPORTERS 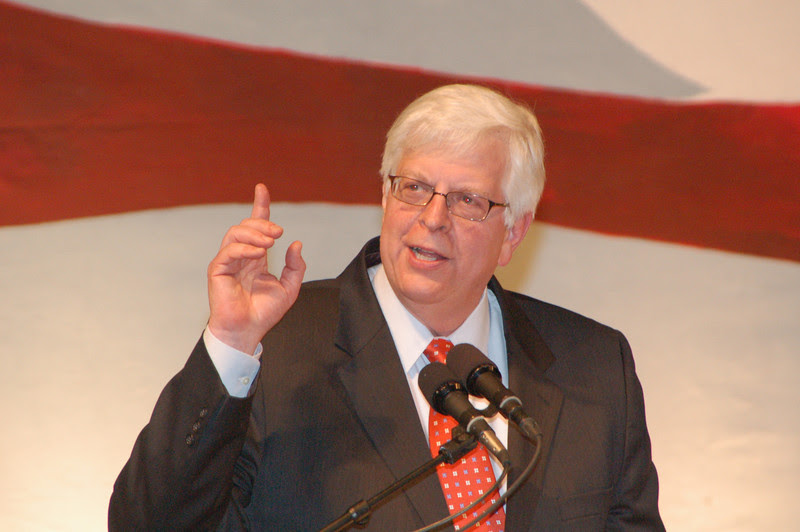 I cannot count the number of times I heard liberal professors and liberal writers quote the phrase: "When fascism comes to America, it will be wrapped in the flag and carrying a cross." The phrase is brilliant. There is actually no threat to America of fascism coming from the right. The essence of the American right, after all, is less government; and fascism, by definition, demands ever larger government.

Therefore, if there is a real fascist threat to America, it comes from the left, whose appetite for state power is essentially unlimited. But because the left has so long dominated American intellectual, academic, artistic, and media life, it has succeeded in implanting fear of the right.

I have never written that there is a threat of fascism in America. I always considered the idea overwrought. But now I believe there really is such a threat -- and it will come draped not in an American flag, but in the name of tolerance and health.

Before explaining what this means, let's be clear about what this does not mean.
First, it does not mean, or have anything in common with, Nazism. Nazism may have been a form of fascism. But Nazism was a unique form of fascism and a unique evil. It was race-based and it was genocidal. No other expression of fascism was race-based. And not all fascism is genocidal. So my fear that the American left is moving America toward an expression of fascism in no way implies anything Nazi-like or genocidal.

Second, it is not liberals or liberalism that presents a threat of fascism. It is the left. Liberals of the 1940s to 1970s such as John F. Kennedy, Harry Truman, Hubert Humphrey, Henry "Scoop" Jackson, Daniel Patrick Moynihan and so many others were not leftists. They were liberals.
But liberalism has been taken over by the left. There are virtually no non-left liberals.
The left now has a president who is a true leftist who is asserting unprecedented presidential power through his cabinet and myriad other agencies (such as the Environmental Protection Agency) and through presidential decrees. The left has taken over the universities and, increasingly, high schools and elementary schools. It dominates the news and entertainment media. And many judges and courts are leftist -- meaning that their decisions are guided by leftism more than by the law or the Constitution.

With all this power, the left controls more and more of the life of the American citizen. And when nothing stops the left, the left doesn't stop.

Last week, the New Mexico Supreme Court ruled that an event photographer's refusal on religious grounds to shoot the commitment ceremony of a same-sex couple amounted to illegal discrimination.
The photographer had never objected to photographing gays. She did not, however, wish to be part of a ceremony to which she religiously objected. In America today, thanks to myriad laws and progressive justices, people can go to prison for refusing to participate in an event to which they object.

This is what happened to a florist in Washington state who had always sold flowers to gay customers but refused to be the florist for a gay wedding: sued and fined.

This is what happened to a baker in Oregon who had always sold his goods to gays but refused to provide his products to a gay wedding: sued and fined.

This is what happened in Massachusetts, Illinois and elsewhere to Catholic Charities, historically the largest adoption agency in America. Their placing children with married (man-woman) couples, rather than with same-sex couples, was deemed intolerant and a violation of the law. In those and other states, Catholic Charities has left adoption work.

In the name of tolerance -- and fighting sexual harassment -- five- and six-year-old boys all over the country are brought to the police for innocently touching a girl.

In the name of tolerance, girls' high school teams in California and elsewhere must now accept male players who feel female.

In the name of tolerance, businesses cannot fire a man who one day shows up on the sales floor dressed as a woman.

For the left, tolerance does not mean tolerance. It means first, acceptance. And second, celebration.

That is totalitarianism: You not only have to live with what you may differ with, dear citizen, you have to celebrate it or pay a steep price.

Meanwhile, in the name of health, there is a similar intrusion into the life of the individual. We saw it in New York City Mayor Michael Bloomberg's call for a law limiting the amount of soda a person can order at one time.
In the name of health, people are banned from smoking outdoors, cigar stores are prohibited from allowing customers to smoke inside, and, incredibly, California is about to ban electronic "cigarettes" as if they were real cigarettes, even though they contain no tobacco, nothing is burning, and they emit only water vapor.

In the name of health, some businesses, like the Bert Fish Medical Center in Florida and Kids II, Inc. (Baby Einstein, Disney Baby) do not hire those who smoke at home. In the name of health, for the first time in American history, what you do -- legally -- at home will be reason for companies not hiring or terminating employees.

In the name of safety, first-grade boys are suspended from schools for playfully aiming a pencil at another boy and "shooting" him.

And then there are the ubiquitous "re-education" and "rehabilitation" seminars that the allegedly insensitive need to take at both private and government workplaces and the speech codes at nearly all universities.

The only question is: Will Americans awaken to the increasingly rapid deprivation of their freedoms -- not draped in an American flag but draped in tolerance and health?