OBAMA'S BROTHER IS LINKED TO THE MUSLIM BROTHERHOOD, ARE YOU SURPRISED?

NEW YORK – President Obama’s half-brother in Kenya could cause the White House more headaches over new evidence linking him to the Muslim Brotherhood in Egypt and establishing that controversial IRS supervisor Lois Lerner signed his tax-exempt approval letter. 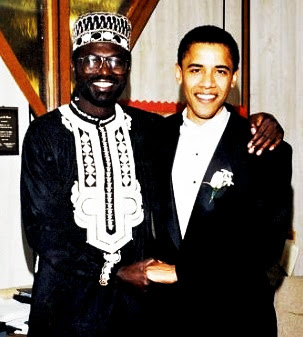 Malik Obama’s oversight of the Muslim Brotherhood’s international investments is one reason for the Obama administration’s support of the Muslim Brotherhood, according to an Egyptian report citing the vice president of the Supreme Constitutional Court of Egypt, Tehani al-Gebali
In a news report on Egyptian television of a Gebali speech, translated by researcher Walid Shoebat, a former Palestinian Liberation Organization operative, Gebali said she would like “to inform the American people that their president’s brother Obama is one of the architects of the major investments of the Muslim Brotherhood.”
“We will carry out the law, and the Americans will not stop us,” she said. “We need to open the files and begin court sessions.
“The Obama administration cannot stop us; they know that they supported terrorism,” she continued. “We will open the files so these nations are exposed, to show how they collaborated with [the terrorists]. It is for this reason that the American administration fights us.”
New! “Impeachable Offenses” lays out the blueprint for impeaching Barack Obama for crimes against the United States. Order it now at WND’s Superstore!
Shoebat said Gebali explained the news is important to Americans who are concerned about their president’s actions, calling it “is a gift to the American people,” implying there were more revelations to come.
In an interview on Egyptian television, Gebali said the cost to Egypt has been great, and she vowed her country will not allow any conspiracy against its people or the Egyptian state. She insisted that pushing Egypt to bankruptcy is unacceptable, because it would plunge her country into a dire state similar to Iraq and Libya.
Shoebat said that if the reports are correct, Turkey appears to play a central role in the alleged conspiracy. He emphasized that Egypt has asserted to the international community that it will not tolerate any attempt to push the country to bankruptcy.
Shoebat’s blog linked to three “very credible sources” that corroborate the report on Gebali’s comments.
Shoebat reported in May that Malik Obama is the executive secretary of the Islamic Da’wa Organization, or IDO, a group created by the government of Sudan, which is considered by the U.S. State Department to be a terrorist state.
In 2010, Malik Obama attended an IDO conference in the Sudanese capital, Khartoum. One of the objectives of the IDO is to spread Wahhabist Islam across the African continent.
Sudan President Omar Al-Bashir supervised the conference. Bashir is wanted by the International Criminal Court on seven counts related to crimes against humanity.
Shoebat asserted the evidence places Malik Obama “in bed with terrorists, working in a terrorist state as an official of an organization created by terrorists.”
Malik’s tax-exempt problems
WND reported in May that funds contributed in the U.S. to a 501(c)3 foundation run by Malik Obama have been diverted to support Malik’s multiple wives in Kenya, an expert on Islamic extremism has charged.
Lois Lerner, the director of the IRS tax-exempt division currently under congressional investigation, signed the letter approving tax-exempt status for the Malik Obama’s Barack H. Obama Foundation.
Lerner, currently on paid executive leave from her IRS supervisory position, took the Fifth Amendment before the House Oversight and Government Reform Committee on May 22 rather than answer questions on inappropriate criteria used by her IRS department to delay or otherwise deny tax-exempt status for tea party and “patriot” groups.
Shoebat has detailed his allegations in a 22-page investigative report titled “New IRS Scandal: Islamic Extremism and Sex Slaves: Report Reveals Obama’s Relatives Run Charities of Deceit,” published on his website
After a thorough examination of available evidence, Shoebat explained to WND his allegations against the Obama family tax-exempt foundati
Posted by Leo Rugiens at 6:22 PM