WHAT? ME WORRY? NO WAY! JUST KEEP RAISING THE CEILING! - Barack Hussein Obama 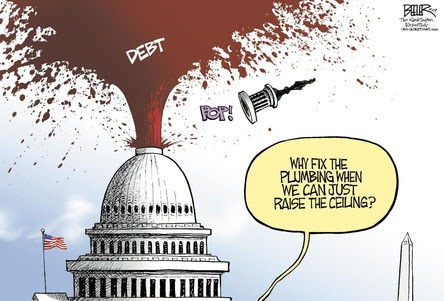 The problem is the debt, not the debt ceiling

FOR WEEKS we've been told that if Congress doesn't raise the federal debt ceiling by Thursday, the government will go into default and the world as we know it will spin out of control.
.

The predictions of doom have been hysterical. Bloomberg reported that a US default would be the first by a major Western government "since Nazi Germany 80 years ago." Warren Buffett compared debt-ceiling politics to weapons of mass destruction — "like nuclear bombs, basically too horrible to use." President Obama, saying he was quoting "CEOs and economists," told a White House news conference that failing to raise the debt ceiling would be "insane, catastrophic, chaos." And the Treasury Department issued a grim warning that a default could prove calamitous: "Credit markets could freeze, the value of the dollar could plummet … and there might be a financial crisis and recession that could echo the events of 2008 or worse."
.
.

Call me a Pollyanna, but I'm quite sure none of that will happen. Whether or not a debt-ceiling deal is finalized this week, the government of the United States isn't going to default on its debt. For all the scaremongering, the stock market doesn't seem to be panicking: The Dow rose smartly last week, and closed up again on Monday. An Associated Press story was headlined: "As US default nears, investors shrug off threat." Maybe that's because investors — or for that matter anyone with a Mastercard or a home-equity line of credit — know perfectly well that the Treasury is not going to welsh on its debt obligations.
.

Hitting a credit-card limit doesn't mean a borrower has become a deadbeat; it means he has to pay down some of the principal before making new charges on that card. The more of his debt he pays off, the more his credit score improves. In similar fashion, the federal government will not be forced to stiff its bondholders if Congress doesn't raise the statutory debt limit this week. Granted, it will only be able to spend what it collects in taxes. But the IRS takes in around $2.3 trillion per year, or about 10 times the amount needed to service the nation's nearly $17 trillion national debt.
.

No wonder Moody's hasn't been spooked by Washington's debt-ceiling soap opera. "We believe the government would continue to pay interest and principal on its debt even in the event that the debt limit is not raised, leaving its creditworthiness intact," the credit-rating agency serenely forecast last week. "The debt limit restricts government expenditures to the amount of its incoming revenues; it does not prohibit the government from servicing its debt. There is no direct connection between the debt limit … and a default."
.

The real threat to America's national interest isn't a debt ceiling that won't go up. It's a national debt that won't stop going up.
.

In recent weeks the president has been shamelessly hyping the horrors that will supposedly ensue if he doesn't get his way on raising the debt ceiling. He was on stronger ground as a presidential candidate in 2008, when he condemned George W. Bush for "driving up our national debt from $5 trillion … [to] over $9 trillion." Such a deluge of red ink was "irresponsible" and "unpatriotic," Obama said; as president he vowed to stem it. One month into his first term, convening a White House summit on fiscal responsibility, he delivered a message any Tea Party conservative could have applauded:
.

"Contrary to the prevailing wisdom in Washington these past few years, we cannot simply spend as we please and defer the consequences," the new president insisted. "I refuse to leave our children with a debt that they cannot repay."
.


But the prevailing wisdom prevailed.
.

In the nearly five years since Obama took office, the national debt has soared to $17 trillion, a sum that would have been unfathomable as recently as a decade ago. Federal debt in public hands now equals nearly three-fourths of GDP. Except for World War II, that is higher than it has ever been.
We are up to our nostrils in debt, struggling to keep our heads above water, and all the while Washington heaps scorn on those who suggest that authorizing still more debt, to finance even more spending, will only make things worse.
.