ROME BURNS AND THE OLIGARCHY PARTIES ON 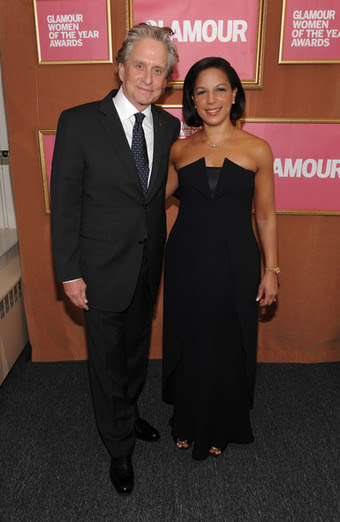 EX UN-AMBASSADOR SUSAN RICE WITH SOME OLD ACTOR
.
.
.
Prowling my hotel room the other night, I discovered a copy of the latest Vogue, kindly provided by the management. So, after bringing myself up to speed on Jennifer Lawrence — a "girl on fire," apparently — I turned to a profile of Susan Rice.
.
.
She was the girl sent to put out the fire, dispatched by the Obama administration to slog through all the Sunday talk shows the weekend after Benghazi and blame it on some video. In Sir Henry Wotton's famous formulation, an ambassador is a man sent to lie abroad for the good of his country. In the case of Susan Rice, a U.N. ambassador is a broad sent to lie to her country for the good of her man — viz., Barack Obama. Happily, it worked. A year on, the director of the video is still in custody, and Miss Rice is now national-security adviser.
.
.
So she and Vogue were in party mood:
"It's a warm evening in June, and guests are assembling for a party she's throwing in honor of LGBT Pride Month at the penthouse of the Waldorf Towers, the official residence of the U.N. Ambassador. Actress turned humanitarian activist Mia Farrow, wearing blue tinted glasses, is one of the first to arrive. Within minutes she's joined by The New York Times's executive editor, Jill Abramson . . ." And soon things are swinging: "They mingle and sip sparkling wine in the elegant living room next to a framed portrait of Oprah Winfrey and First Lady Michelle Obama resting their heads on Rice's shoulders . . ."
.
.
Presumably Vogue subscribers are impressed by this sort of thing, but it would seem an odd opening paragraph for a profile of even recent U.N. ambassadors. Hey, maybe I'm wrong; maybe Vogue profiled cocktail soirées chez John Bolton attended by Andie MacDowell or Valerie Bertinelli, and with the great man photographed between Phil Donahue and Barbara Bush, or Merv Griffin and Mamie Eisenhower. Who knows? Out there, in a ramshackle outpost somewhere on the fringes of the map, brave Americans abandoned by their government are dying on a rooftop. But here in the metropolis the dazzling klieg-light luster of Mia Farrow and Jill Abramson plunges all else into shadow.
.
.
If you're not looking at the world through Mia Farrow's blue-tinted glasses, if you're in Beijing or Moscow, Ankara or Canberra, it's the shadow that everyone sees, very clearly — the sepulchral Habsburgian twilight of a dimming power enjoying its last waltz. Like Vienna exactly a century ago, America retains a certain creative energy, if you're willing to put Jay-Z up there with Franz Lehár. It is at the forefront of therapeutic culture: If Freud had thought to stick his couch on a TV set, he might have made as much dough as Oprah, or at least Dr. Phil. As Vienna sat on an underground "river of sex" (as William Boyd calls it in his recent novel Waiting for Sunrise), so in America the river is overground and its Niagara-like roar the unceasing background din of daily life: A New York mayoral candidate twitpics his penis. A putative successor to San Diego's grope-fiend mayor is caught masturbating in a city-hall men's room. Miley Cyrus in her scanties "twerks" — or is twerked upon (I'm not sure I can reliably say which) — live on TV. Yawn. Next . . .
.
.
No one could be further from the octogenarian Franz Josef than our young emperor, but even hip courtiers draw the line at lèse majesté, and so rodeo clowns who disrespect the sovereign are banned for life. On the distant horizon, the contours of the post-American world begin to rise, but the preoccupations of our ruling class grow ever more myopic. One of the world's richest women flies all the way to Switzerland in order to confuse a Zurich boutique selling $38,000 handbags with an Alabama lunch counter 60 years ago, to the consternation of the poor shopgirl who knows nothing of America's peculiar parochial obsessions, has never heard of Trayvon Martin, and lives in a city where pretty much the only black women around are the more fashion-conscious African dictators' consorts in town to visit their safe-deposit boxes. But, as at the Hofbau, the ancient social rituals of our own court permit no diversion from the program: If it's Tuesday, it must be racism.
.
.
Alas, in the world beyond the penthouse of the Waldorf Towers, it's harder to tell whom the A-list invites should go to: From Afghanistan to Egypt, a debt-ridden America bankrolls its own eclipse, betraying friends, promoting enemies, despised by both. In the dog days of summer, the new national-security adviser tweets it in from her pad in the Hamptons or wherever, even as the hyperpower readies for its next unwon war: After America's slo-mo defeat in the Hindu Kush, and its ineffectual leading-from-behind in Libya, and its thwarted Muslim Brotherhood outreach in Cairo, Obama is confidently dispatching the gunboats to Syria. If you're Bashar Assad, you must be as befuddled as that Zurich handbag clerk: Hillary hailed you as a "reformer"; no senatorial frequent flyer courted you more assiduously than John Kerry; the guys trying to depose you hate the Great Satan far more than you do, and are the local branch office of the fellows who turned lower Manhattan into a big smoking hole. Yet Washington is readying to take you out — or at any rate, in George W. Bush's unimprovable summation of desultory Clinton-style warmongering, readying to fire a $2 million cruise missile through a tent and hit a camel in the butt. The only novelty with this latest of ineptly rattled sabers is whether Tsar Putin will stand by and let Obama knock off a Russian client.*
.
.
Putin, Assad, General Sisi in Cairo, and many others think they have the measure of Obama, Kerry, and Rice. Poor deluded fools. If only, like Mia, they could see them through blue-tinted glasses . . .
.
.
.
*I wrote this piece for the last issue of National Review. Re Putin, we now know the answer.