CARLY FIORINA IS READY TO ANSWER HER CRITICS 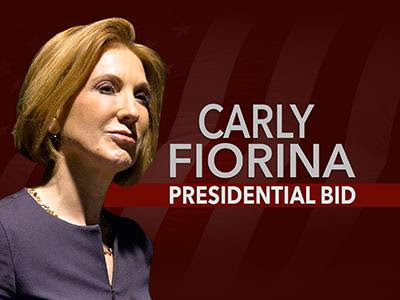 The Less-Known Side of Carly Fiorina’s Life
by Jim Geraghty
August 17, 2015 9:52 AM
THE CORNER
National Review Online
.
From the first Morning Jolt of the week: What You Probably Don’t Know About Carly Fiorina
.
You’re hearing it already: If Carly Fiorina gets the nomination or is on the ticket, they’ll play the Romney card against her: She’s wealthy, she’s out-of-touch, she’s laid people off, she’s this heartless, soulless embodiment of corporate greed.
.
In the near future, you’ll probably hear some Democrat – or perhaps a Republican rival – suggest, “Carly Fiorina’s been living the high life in corporate corner offices for a long time; she has no idea what real life is like for everyone else.”
.
Perhaps at that moment, Carly Fiorina will discuss the death of her stepdaughter, Lori, who passed after years of struggling with alcoholism and drug abuse. Fiorina raised Lori from an early age, and she writes in her book, Rising to the Challenge: In the midst of all this, on October 12, 2009, that we learned of Lori’s death. For the second time in nine months, time stopped. We had spent the last months of her life desperately trying to intervene with her doctors to make sure they understood the depths of her illness. Because of the way privacy laws are written, we couldn’t learn anything from Lori’s doctors that she didn’t want us to know.
.
Finally, we found a doctor who kindly told us she could listen, although she could not tell us anything. But by then it was too late. I have thought often since then how poorly we deal with mental illness and addiction as a nation. Like Lori, those who are ill frequently fight against help. Medical privacy laws, although perhaps well intentioned, make it easier for an addict to continue down a destructive path.
.
These laws make it very difficult for those who worry that a loved one is a danger to themselves or others to get the help so desperately needed. They also make it difficult for concerned physicians to raise a warning flag. And criminalizing addictions, or minimizing the devastating impact of mental illness on friends and communities, only makes these problems worse.
.
We had pleaded with Lori to move closer to her family in those last months. But as many addicts do, she literally ran away from the people trying to help her. She insisted on moving to New Jersey. In my last conversation with her on the phone, I begged her again to let us get her help. She put me off. Not all I could think of, staring at the policemen standing in my living room, was what else I could have done to save her.
.
That reference to “the second time in nine months” was a reference to Carly’s cancer diagnosis. (Tell me again how she doesn’t know tough times.) Every Republican candidate is going to argue against Obamacare’s changes. But she’s going to have a unique perspective: Many long days and multiple scans, MRIs and mammograms later, we finally had a more definitive diagnosis: it was breast cancer, stage II.
.
It hadn’t been detected in the mammogram I had had weeks earlier, because the tumor in my left breast was very small. At the same time, the cancer was very aggressive and had spread to lymph nodes that are not captured in a mammogram. It was, without a doubt, a very close call. Later, after Obamacare was passed, the Health and Human Services Administration changed the protocol for breast cancer screening. They recommended that women get a mammogram every other year and that they not do self-examinations.
.
The Obama administration had concluded that this change in protocol would minimize false alarms and cost. I remember being insulted when HHS justified these changes by saying the old protocol caused too much trauma and concern. Women are tough. We can handle it. I remember thinking that if I had followed this protocol, I would probably be dead.
.
Republicans usually do particularly poorly in polls that ask whether the candidate “understands the problems of people like you.” Fiorina’s going to have compelling personal stories to tell when she needs to emphasize that she knows what it’s like to go through tough times.

Read more at: http://www.nationalreview.com/corner/422627/less-known-side-carly-fiorinas-life-jim-geraghty
Posted by Leo Rugiens at 1:27 PM