MACHIAVELLI IS THE INSPIRATION FOR TRUMP'S CANDIDACY 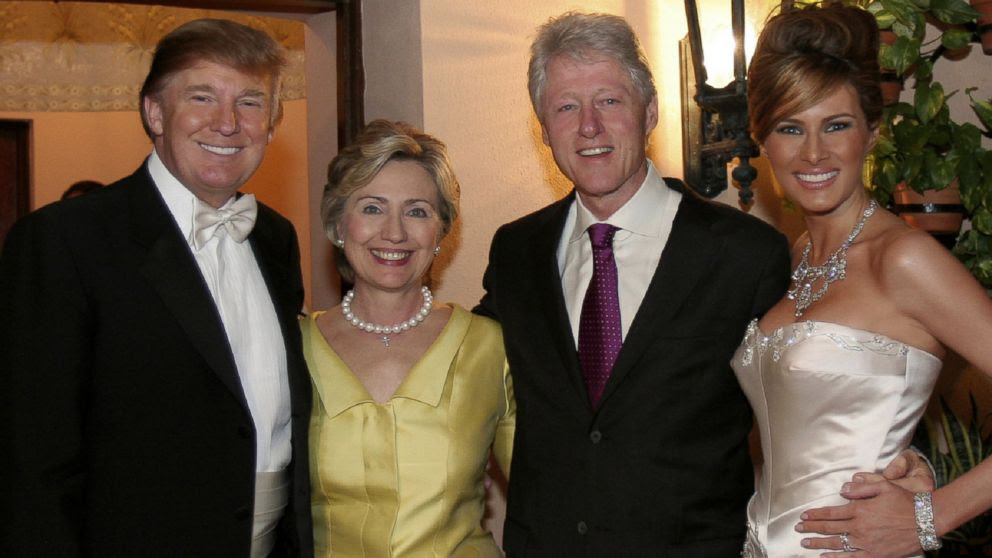 [emphasis by Leo Rugiens in red typeface]
.
Or maybe it’s Big Mac-iavelli. That would be former President Bill Clinton, who was known for his fondness for stopping at McDonald’s during his jogs in his days in the White House. While he has eschewed such unhealthy fare since his heart surgery in 2004, the name still fits.
.
It emerged last week that the former president had a telephone chat last May with none other than Donald Trump. That was just before the bombastic billionaire decided to toss his hat (and the mop that resides beneath it) into the Republican presidential ring—and not long after Hillary Clinton made her long-awaited official announcement to seek the Democratic nomination, the Washington Post reported.
.
It wasn’t unusual for Mr. Bill and The Donald to phone each other about such topics as golf and donations to the Clinton Foundation. But, according to sources quoted by the paper, the latter was “candid about his political ambitions and his potential interest in seeking the White House during the talk.” The former president didn’t urge him to run, but was curious about his plans, the report added.
.
The Donald’s consorting with the other side raised eyebrows, if not hackles, among some of his GOP rivals, notably former Hewlett-Packard CEO Carly Fiorina. “I didn’t get a phone call from Bill Clinton before I jumped into the race. Did any of you get a call from Bill Clinton?” she asked her fellow participants in the not-ready-for-prime-time undercard prior to the main event on Thursday evening, the debate of the top 10 GOP contenders in the polls.
.
To my devilishly clever wife, the scheme was obvious (although not to her slow-witted hubby). Bill would induce The Donald to run to ensure Hillary’s victory. Either he would be the GOP nominee and the easiest opponent for her to defeat, or he would mount a third-party campaign and ensure a Democratic victory—just as Ross Perot had done for Bill in 1992.
.
It turns out that notion had also occurred to Brent Budowsky, a D.C. veteran. In an opinion piece in The Hill, he asked, “Is Trump a Clinton Plant?”
.
Budowsky checked off the list of possible aims of such a ploy, such as providing a stream of outrageous sound bites from Trump that the Dems could use later; offending Hispanics, who would be a vital bloc for the GOP to win; deflecting attention from bright new stars in the party, such as Florida Sen. Marco Rubio or Wisconsin Gov. Scott Walker. Check, check, and check.
.
“Of course, the grand slam for Hillary Clinton would be if Donald Trump were to run as a third-party candidate in 2016,” Budowsky wrote. And right at the outset of Thursday’s debate, Trump alone raised his hand to declare that he would not necessarily support the eventual Republican presidential nominee or would eschew an independent White House run.
.
The Donald later managed to add the entire female gender to the list of those he has offended with his demeaning treatment of Fox News Channel’s Megyn Kelly and her question about his description of some women. And he seemed rather defensive about the bankruptcy filings by entities bearing his name, calling it merely using the law to his advantage.
.
Veteran Washington watcher Greg Valliere of Potomac Research Group summed up The Donald’s evening: “Entertaining and riveting, but let’s be blunt—Trump was a cringe-inducing embarrassment. First Hispanics, then veterans, now women—who will he alienate next? Republicans! Trump won’t agree to support the GOP nominee, and his descent now begins, perhaps as rapid as his ascent?”
.
Greg’s scoring on the rest of the field: former Florida Gov. Jeb Bush, adequate, “but a quart low on energy.” Walker wasn’t hurt, but suspicion remains he’s not ready to be president. Dr. Ben Carson—over his head most of the night, but a strong finish. Ohio Gov. John Kasich, the hometown favorite at the Cleveland event, “helped himself. He’s the one Republican that Democrats really like—and that’s a kiss of death.”
The best moment may have been the face-off between New Jersey Gov. Chris Christie and Sen. Rand Paul of Kentucky over the NSA, with the decision going to the former. Greg called Christie one of the big surprises,—“crisp, but poised, forceful but not bullying.” Paul’s campaign meanwhile “has been in free-fall” and his performance on Thursday didn’t help. Texas Sen. Ted Cruz showed he will be the anti-establishment candidate for months to come—especially as Trump implodes.
.
As for the winners, Greg has asserted that Rubio is “the greatest talent in the race” and “helped himself tremendously” in the debate. And former Arkansas Gov. Mike Huckabee was “polished and assertive” and could surprise in the Iowa caucuses. Meanwhile, he says, Fiorina “clearly belongs on the big stage,” while it’s time to stick a fork into former Texas Gov. Rick Perry—“he’s done”—along with South Carolina Sen. Lindsay Graham, Louisiana Gov. Bobby Jindal, and former Sen. Rick Santorum.
.
Trump remains at the top of the leader board, for now. Nothing he said or did probably flipped many of his foes or did much to deter those in his camp who are attracted by his bluster. Neither are the latter likely to be put off by his flip-flops from previous Democrat leanings, from contributing to the Clintons as well as to Ted Kennedy and former Rep. Anthony Weiner (whose name remains a punchline), to support for abortion rights and a single-payer health-care system.
.
So, if The Donald does manage to get on the November 2016 presidential ballot, either as the GOP standard bearer or as a third-party insurgent, it would seem the Democrats—whom he formerly supported—would be the big beneficiaries.
.
Big Mac-iavelli, celebrate with a salad.
Posted by Leo Rugiens at 6:28 AM