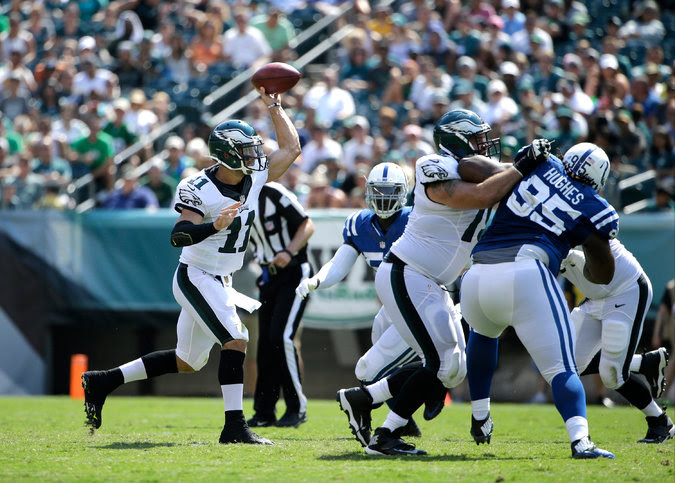 For Tim Tebow, a Touchdown and the Philadelphia Eagles Fans’ Adulation


There were seven minutes left in the third quarter when the Philadelphia fans began to cheer on Sunday. Then they cheered louder. And then they stood.
.
At a meaningless preseason game. All for a player who had not taken a snap in two years and was battling to be the third-string quarterback.
.
Short of a comeback from the 52-year-old Randall Cunningham, there is only one man who could have elicited that reaction from the normally tough Eagles fans. Tim Tebow, of course.
The noise was so loud that Tebow had to ask the fans for quiet so he could call a snap from the shotgun, an action more associated with big moments in playoff games than with football in August.
After completing his first four passes, all for first downs, Tebow wound up 6 for 12 for 69 yards. He drew another ovation when he dove into end zone for a 7-yard touchdown in the fourth quarter of the Eagles’ 36-10 victory over the Indianapolis Colts. He was also sacked twice.
“Today was just one more step,” Tebow, 28, told the NFL Network. “Trying to learn the offense. Get out here the first time live bullets are flying.”
“I liked how Timmy threw it,” Eagles Coach Chip Kelly told The Associated Press.
“Tee-bow! Tee-bow!” commented the Philadelphia fans.
Three of the Eagles somewhat motley collection of quarterbacks played.
The season’s expected starter, Sam Bradford, acquired in March from the St. Louis Rams in a surprising trade for the Eagles’ 2014 starter, Nick Foles, was held out after missing last season with a torn anterior cruciate ligament.
.
The Eagles No. 2, the former Jets quarterback Mark Sanchez, did not especially impress, completing 2 of 7 passes for 52 yards. Perhaps ominously for Tebow, the player he is most likely battling for the No. 3 spot, Matt Barkley, did well, going 12 for 20 for 192 yards and one interception.
All these perfomances must be taken with a grain of salt, as the game, like most exhibitions, was populated by backups playing at less than full throttle.
.
Tebow first made a name for himself with a Heisman Trophy in 2007 and national championships at Florida in 2006 and 2008. The attention was magnified because of his overt Christian faith.


As a pro, Tebow had one big season, 2011 with the Denver Broncos. Replacing an ineffective Kyle Orton after five games, Tebow repeatedly seemed to underachieve for three quarters, while the Broncos’ stout defense kept the game close, then pull off a miracle in the last minutes.
Opinions were sharply divided over whether these late heroics were the result of a gritty winning mentality or just luck.
.
Despite a dramatic playoff win over the Steelers, the Broncos signed Peyton Manning, and Tebow’s time was up. He threw eight passes as Sanchez’s backup with the Jets, appeared in a couple of preseason games for the Patriots, then left the game, most people thought, for good.
When Kelly, often the iconoclast, signed Tebow for this season, it raised a few eyebrows. Speculation was rampant.
.

Though his career passing numbers are not sensational, Tebow has always had great rushing ability, and is especially dangerous around the end zone. His 57 rushing touchdowns in college ranks fourth all-time among quarterbacks. He had 12 rushing touchdowns in his two seasons in Denver, trailing only Cam Newton over that period.
.
When the N.F.L. was considering moving the line of scrimmage for a 2-point conversion to the 1-yard line, some suggested Kelly’s master plan was to make Tebow into a conversion specialist.
In the end, the league did not change the rule, but Kelly is a fan of the 2-pointer, and Tebow may still get that role.
.
A football season is unpredictable. Bradford has had injury problems, and could run into trouble again. Sanchez could be ineffective. There is a chance that Tebowmania could be revived in Philadelphia.
.
It is also possible that, as in New England two years ago, Tebow will get cut. And that will mean an end to the very brief era of preseason standing ovations.
Posted by Leo Rugiens at 1:06 PM